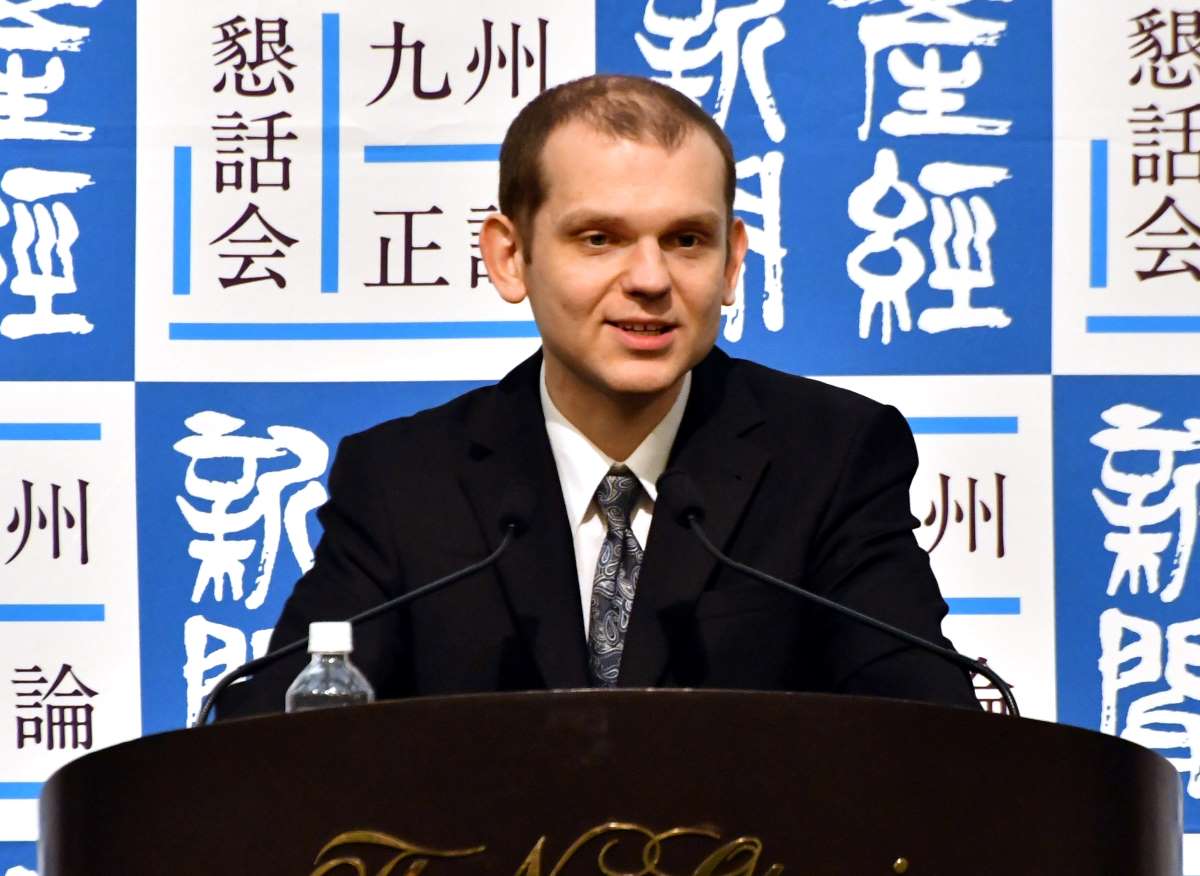 International relations expert Andrii Gurenko joined the JAPAN Forward team for its first podcast in Japanese on Twitter Spaces on March 11. Gurenko, who is from Ukraine, shared his insights on the background of Russia’s invasion, causes of the war, and what can Japan and the international community do going forward.

Yasuo Naito, editor in chief of JAPAN Forward, hosted the discussion. Previously the Moscow Bureau Chief for The Sankei Shimbun, Naito is an experienced foreign correspondent, reporting from Moscow among other places on the annexation of Crimea in 2014, and much more.

In this first installment, Naito’s questions and Mr. Gurenko’s comments focus on the causes of the conflict and the role of the international community.

The war in Ukraine does not appear to be going well for Russia. Why do you think that is?

I don’t know if one can call this a miscalculation, but I think that the military plan was not based on the real situation and was naive, overly optimistic. In reality, the military campaign is dragging on. In other words, they didn’t predict such opposition. They thought that the resistance would fall just as easily as it had in Crimea.

I think also another difference is the motivation of Ukrainian soldiers. In that sense perhaps we can talk of miscalculation. The motivation of soldiers is linked to the reason for fighting. For Ukrainians this is clear: there was an invasion, and they need to protect their homeland. It’s a clear and simple reason. And when one fights for this reason, then one fights to the death.

But Russia is in a different position. They are the invaders and they don’t really have a reason. Putin has tried to put an excuse to justify the invasion, such as the fact that killings were taking place in Ukraine, and they are fighting Nazism. But they are senseless reasons, and many people know that these explanations are lies. Therefore, some portion of the Russian soldiers have a very low motivation to fight. Because they understand that they are invaders, and invaders tend to have lower motivation to begin with.

As far as equipment goes, Russia has an advantage. But their conviction [to win] is completely different, and that is having an impact on how the war is going, more than many people expected.

In addition, the weapons sent by the West, especially anti-tank and hypersonic missiles, are proving very effective in this war.

Why do you think that Russia invaded Ukraine?

There is an ideological reason. He (Russian President Vladimir Putin) really believes that Russians and Ukranians are the same people. And therefore, in his reasoning, it’s obvious that the same people should be in the same country.

It might sound crazy, but Putin is a crazy person. He thought that even though people might not welcome the Russian army, at the very least they would not resist.

From his perspective, this invasion is just a way of reinstating territory that was in the past part of the mother country, and Russia is just taking back territory where other Russians live. This vision of course has nothing to do with reality, because he lives in an illusion.

The other reason is the trauma from the fall of the United Soviet Socialist Republic. Putin himself has said multiple times that the breaking up of the USSR is the biggest geopolitical catastrophe of the 20th century.

He thinks that this territory was wrongly taken from Russia. Therefore, following this logic, obviously one needs to reinstate it. The idea is therefore not that Russia is an empire invading other countries, but that it is just recovering a territory that was already theirs.

Often commentators talk about how Russia has everything to lose from this invasion, and nothing to gain. And that is definitely true. But Putin thinks that this is the correct thing to do. Therefore, that’s why he is doing it.

Why is Putin doing this?

The reason why this is happening in the first place is that the longer a dictator is in power, the more the dictator’s thinking becomes progressively less grounded in reality. Putin has already been a dictator for 22 years. He has unrivaled authority.

If someone has absolute power, there are no opposing opinions. For example, Putin has people working under him that every day report to him. But they are afraid of saying things that might upset him, and hide that information.

Therefore, the information he is seeing is information that he likes, that he agrees with. In this way he falls at risk of acquiring a skewed version of reality.

It’s probable that he received reports saying that if Russia invaded Ukraine, the worst that could happen is that people would not resist. The more people under a dictator are afraid of speaking the truth, the more information gets divorced from reality. This is something that happens with all dictators, and in that sense Putin is no exception.


So the next question is, why now?

I think that Putin thought that he had no other option available to get hold of Ukraine. The reason for this is because already in 2014 he invaded Crimea, there was the word “Nova Rossia” (New Russia). At that time he tried to put pressure on the population not with the army, but through armed groups. That didn’t go well, and the Ukrainians resisted.

Then, between August 2014 and February 2015, Russia defeated the Ukrainian army twice. Because Ukraine had seen defeat twice, Russia thought that, with some military pressure, it would definitely give up [its independence]. But that didn’t happen.

Since then, [Russia] has tried different tactics: there were terrorist attacks in Ukraine, assasinations, and economic pressure intended to make Ukraine give up. But that also didn’t work.

What do you see that changed?

In 2019, Volodymyr Zelenskyy won the presidential election in Ukraine, and he was of the party whose platform was that the war needed to be stopped. But looking at his affiliation, Russia thought that they would make Ukraine give up.

And Russia did put pressure, but on specific things to do with independence and sovereignty, Ukraine did not give in.

Following that, in 2021, Joe Biden won the presidential election in the US. Biden was known to be anti-war. And because he hates war, Russia thought that if it did start a war, Biden wouldn’t do anything. However, it was not so simple, and Biden in reality did not want to allow Ukraine simply to fall under the Russian sphere of influence.

Therefore, if you look at it as a whole, [Russia] tried to do a variety of things, but nothing went according to plan. From Putin’s perspective, I think that he decided that the only thing left to try was to directly attack Ukraine.

In addition, he probably thought that if he waited any longer, Ukraine would increase its military capability. Therefore, he could have seen it as a preventative measure to avoid greater problems in the future.

Some people are already afraid that this will turn into a second Afghanistan, where Russia invaded and then retreated two decades later. What scenarios are realistic?

There are some scenarios which are conceivable.

The first scenario is one of guerrilla warfare. In this case, there will be losses on the Ukrainian side, but also on the Russian side. And they will not be like Afghanistan. There will be many more deaths.

There is the scenario where Russia increases its military pressure, and Ukraine is forced to give up. But even in this case, there might be a temporary victory, it doesn’t mean the situation will not develop into guerrilla warfare. The situation is not just going to calm down.

There is also the possibility that the current government is left in place, but [as Russia wins] it has to negotiate and give up a lot of information, even without being a puppet government.

On the other hand, the situation could just stay like it is now, in a stalemate for months or even years, and the Russian army doesn’t progress any further.

One optimistic view is that this stalemate continues, and early on, due to financial sanctions, Russia financially collapses. And then the money to conduct this war runs out. The control of territory becomes impossible, and therefore they (the Russians) have no choice but to retreat.

Right now, it’s impossible to see which scenario is going to be more likely, but the international community needs to work hard in order to make sure that this last scenario is the one that plays out.

What happens is ultimately up to the international community, I think.

What do you think the world will look like in the future?

I think that everything will depend on how the democratic countries behave, I think if these countries come together and impose measures on Russia ー which don’t need to be military, they can be economic measures ー to make Russia give up this war. That way the international order is preserved, and even those countries that are thinking about a possible invasion, might rethink their strategy.

If, however, there is no way of stopping the invasion, this will lead to a breakdown of the international world order.

Because countries that are pondering invading other areas, such as China, for example, their path is cleared for an easier invasion. If invasion has already succeeded once, and the international community didn’t do very much, then I think that wars will increase.

In addition, if it becomes clear that even in the case of invasion nothing happens, those countries that may previously have feared invasion and didn’t do anything, might later decide to strengthen their army and hastily invade other countries.

More countries might decide they want to acquire nuclear weapons.

If this happens, in turn, the whole concept of nuclear non-proliferation might become impossible to actualize as more countries acquire nuclear weapons.

In this case, not all countries will be able to manage the weapons properly. And the world will become a more unsafe place in the future. It could lead to chaos.

I therefore think that this war is a crucial crossroad ー to decide whether the world order will be preserved and the era of peace will continue, or whether this will be the catalyst for the return of a period of total war, like the 19th century, with empires fighting one another.

This is why the behavior of democratic countries is so important.