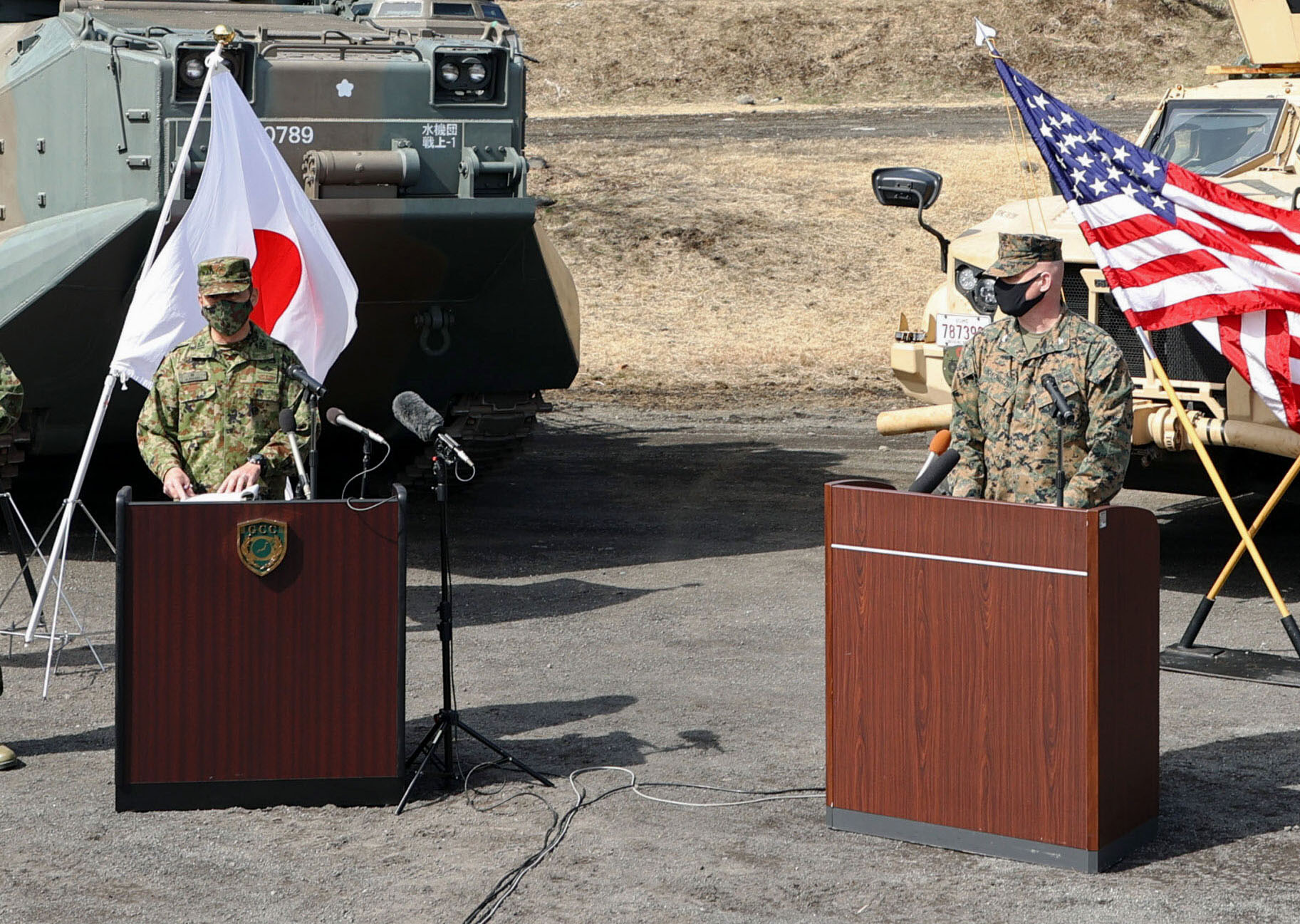 US and Japanese commanders talking to the press about the 2022 joint training taking place at Camp Fuji, Shizuoka Prefecture.

From March 6 to 25, 600 American Marines from the 31st Marine Expeditionary Unit are training with 400 Japanese “Marines” from the Japanese Army’s Amphibious Rapid Deployment Brigade (ARBD) at Camp Fuji, the US Marine Corps training base about an hour west of Tokyo.

They will be conducting a range of exercises, including an amphibious landing and airborne landing training — with the Japanese bringing their MV-22 Osprey helicopters into action for the first time.

This isn’t the first time Marines and the Japanese have trained together, but over the last couple years there has been an increase in the frequency and complexity of the training. This writer was involved with the inception of the ARBD. Having followed it closely since, it can be said with certainty that this has been a long time coming. And it’s important.

It is worth looking more closely at the nature and significance of the ongoing exercises, particularly in light of the troubles in Ukraine and fears that China may decide to make its move on Taiwan.

How significant is this combination of forces training at Camp Fuji?  Does it offer any significant deterrence to China?

By themselves, 600 Marines and 400 ARDB training at Camp Fuji probably won’t cause the Chinese to surrender or give up their plans for seizing Japanese territory or otherwise teaching the Japanese a lesson. But that’s neither here nor there.

The real significance of this training is that the Marines and the ARDB are doing serious combat training of a sort that would have been unthinkable (except to people like me and some others) a decade ago.

The ARBD itself was unthinkable back then too. It shows what’s doable with a little imagination and effort. A lot has changed in recent times in terms of Japanese capabilities and their ability to operate with US forces — and Chinese planners are no doubt keenly aware of these changes.

A Japan Self-Defense Force (JSDF) that’s capable of fighting an actual war — and able to fight alongside the Americans — had never existed during the entire previous 60-plus years of the US-Japan alliance. The US and Japanese navies are the exception, but beyond that the JSDF wasn’t all that useful to itself or to the Americans. So what you’re seeing on display at Camp Fuji is a considerable change.

It’s a psychological change as well ー for both sides. For too many years (indeed decades) both sides were pussy-footing around and pretending the US-Japan defense alliance was about everything except fighting a war — or preventing a war by actually being able to fight and win.

And don’t forget the political aspects of this sort of training.  It demonstrates a more solidly linked US and Japan ー that is, giving serious thought to doing what’s necessary to fight against aggressors (China and Russia and, if necessary, North Korea) in the region.

And there’s a Taiwan angle to all of this too. The Marines and the ARDB are natural partners for a fight down south, arising out of a Taiwan scenario.

The introduction of GSDF Ospreys is nice to see. Indeed, some of us were afraid they were just going to sit and rot on an airfield somewhere.

The Ospreys are very useful for operating in the Nansei Shoto region (Japan’s southern islands) given their speed and range. Makes it a lot easier to move people and things around.

As for the Japanese habit of complaining about people training to defend them, recall all the uproar and whining over the Marines bringing Ospreys to Japan a decade ago?  “Too dangerous,” “too noisy,” and so forth. Well, here we are today and the Japanese are flying Ospreys ー and the moaners have gone silent.

Not a peep about Japan getting dragged into America’s wars, or the Japanese people are being frightened by all this noisy military training.

Apparently everyone forgot what they were complaining about. That too is a big change. If the Chinese thought Japan would “fold,” they were probably wrong.


Given the situation in Ukraine, what kind of message does this exercise give to China, or even to Russia?

This exercise is one more data point for the Chinese and Russians that suggests the Japanese (and the Americans) are not going to give up without a fight. And, beyond the military aspect, it suggests there’s financial and economic warfare on the menu as well, given that Japan’s political leaders are presumably supporting the training — as is the general public.

Other regional nations are watching as well ー and sizing up the prospects for a solidly linked US and Japan that will work together to defend the free world’s interests in the Indo-Pacific.

That just may draw in a few other countries that want in on a good thing.

And let’s see if the defense of the Nansei Shoto becomes a fully combined effort by the Japanese and the Americans (and all services). If it does, the Chinese will be unhappy — and possibly a little deterred.

So, at the end of the day, the Camp Fuji training is valuable for what takes place and for what it symbolizes. But it’s best viewed as the early stages of a long overdue move towards seriousness in the US-Japan relationship. Now let’s see what comes next.

And, finally, having been involved in US-Japan defense matters for quite a while, I consider it a good sign that, over the last couple of years, the Marines have been giving the Japanese forces some real attention and treating them like equals.

A lot depends on Marine commanders having the wisdom to recognize the operational and political benefits that come from working with the Japanese.

Hopefully their successors won’t forget that the more effort you put into the Japanese JSDF, the more you get out of them as a partner that will give an enemy all — and maybe more — than they can handle.