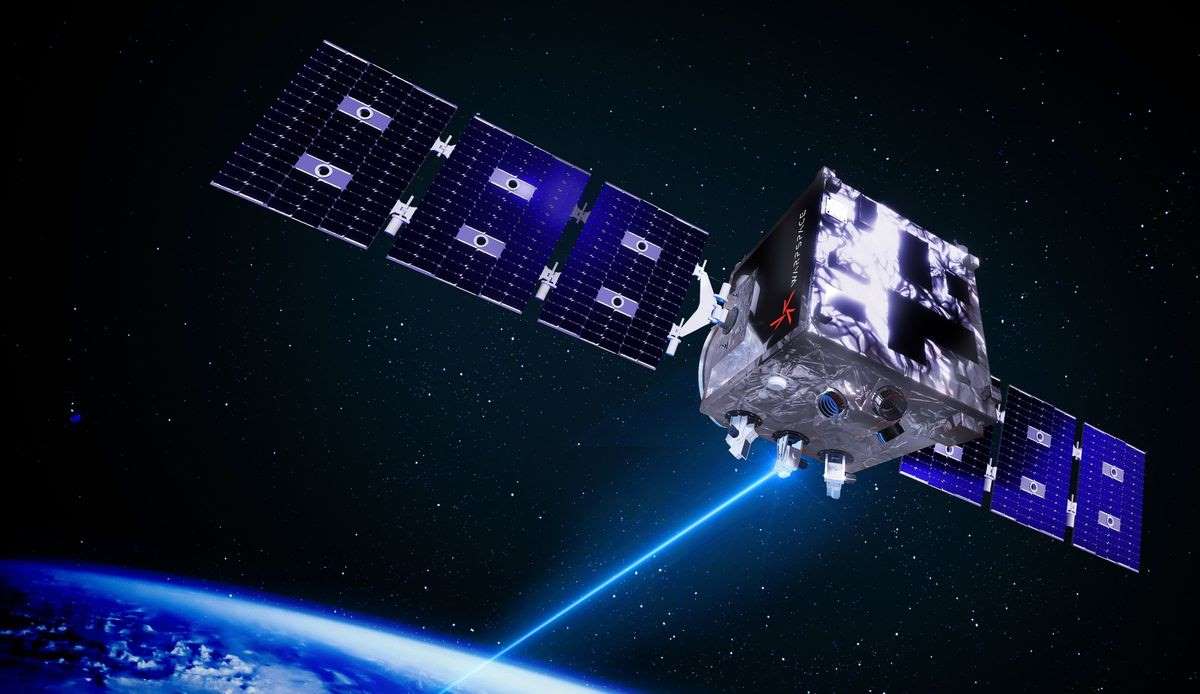 Warpspace (Tsukuba City, Ibaraki  Prefecture), a space venture company founded at Tsukuba University, announced on May 31 that they would be launching a laser-based optical communication network into space as early as the winter of 2024. If it comes to fruition, it will be the first privately-commercialized service of this type in the world.

The service is expected to have uses in many fields including disaster prevention, military, and security. And, the company is aiming to form optical communications connecting the moon and the earth in the future.

The new service, “WarpHub InterSat,” will launch three satellites capable of optical communication into a medium earth orbit of 8,000 to 20,000 km above ground. These satellites will communicate with other satellites operating at a low earth orbit of 400 to 1,000 km above the ground, and send this information back to earth. Warpspace’s satellites and ground stations will be equipped with light receivers and emitters. They will use near-infrared light to search for each other’s position, and then exchange data if they coincide.

There are some problems with conventional processes for satellite image transmission, which use radio waves. For example, there are limitations on the frequency of the radio waves and on the locations of where transmission and reception can be performed on the ground. If the optical communication service is put into practical use, the possibilities for its use would increase. Still images and videos from satellites would be available nearly in real time.

The first satellite, “LEIHO,” is a cube with 1-meter sides that weighs more than 200 kilograms. The company is progressing with preparations and aiming to launch in October of 2024. A free test service could be available as early as winter of that year.

The company will begin to commercialize the service in 2025, and three more satellites are slated to be launched in 2026. By operating and integrating multiple optical communication satellites, continuous high-speed communication between satellites and earth will become possible.

The transmission speed will be 1 Gbps (gigabit per second) at the beginning of the test service, but will eventually be increased to 10 Gbps. According to the company, it is up to a few dozen times faster than radio wave transmissions, depending on weather conditions and other factors.

At the same time,Warpspace is proceeding with the establishment of ground stations, and planning for about 20 locations in Japan and overseas. The locations are currently under selection, and a ground station in Japan will be constructed as early as September 2022.

During the Russian military invasion of Ukraine, the Ukrainian army used satellite images from United States space-related venture companies to help achieve results in analyzing part of the war situation. According to Warpspace, they have received some inquiries about using their technology for disaster prevention and security purposes.

Additionally, satellite data would be helpful in understanding land usage, traffic volumes, and the growth of different agricultural products. It could also be used to estimate the quantity of oil stockpiled in certain locations by examining the position of oil tank lids.

Earth to Moon and Back

Furthermore, Warpspace is aiming for an optical communication service between the earth and the moon. In January of 2022, the company was commissioned by the Japan Aerospace Exploration Agency (JAXA) to study how to put an optical communication system that connects the moon and the earth into practice. The competition for exploration and development of the moon is intensifying worldwide, and the company wants to start the service in 2030.

CAPTION: After the press conference, Satoru Tsunemachi (right), CEO of Warpspace, takes a commemorative photo with a satellite model in his hand. May 31, 2022, Tsukuba City, Ibaraki Prefecture. (Photo by Nobuhito Matsumura)

In a press conference on May 31, Warpspace CEO Satoru Tsunemachi said, “From Tsukuba to the rest of the earth, the moon, and even further to Mars, we want to expand our telecommunications business while keeping in pace with the future of humankind’s activity in space.”

Warpspace was established in 2016, based space-related research and development into communication satellite technology at the University of Tsukuba. In 2021, a satellite to demonstrate the company’s technology was launched and successfully put into orbit from the International Space Station (ISS).