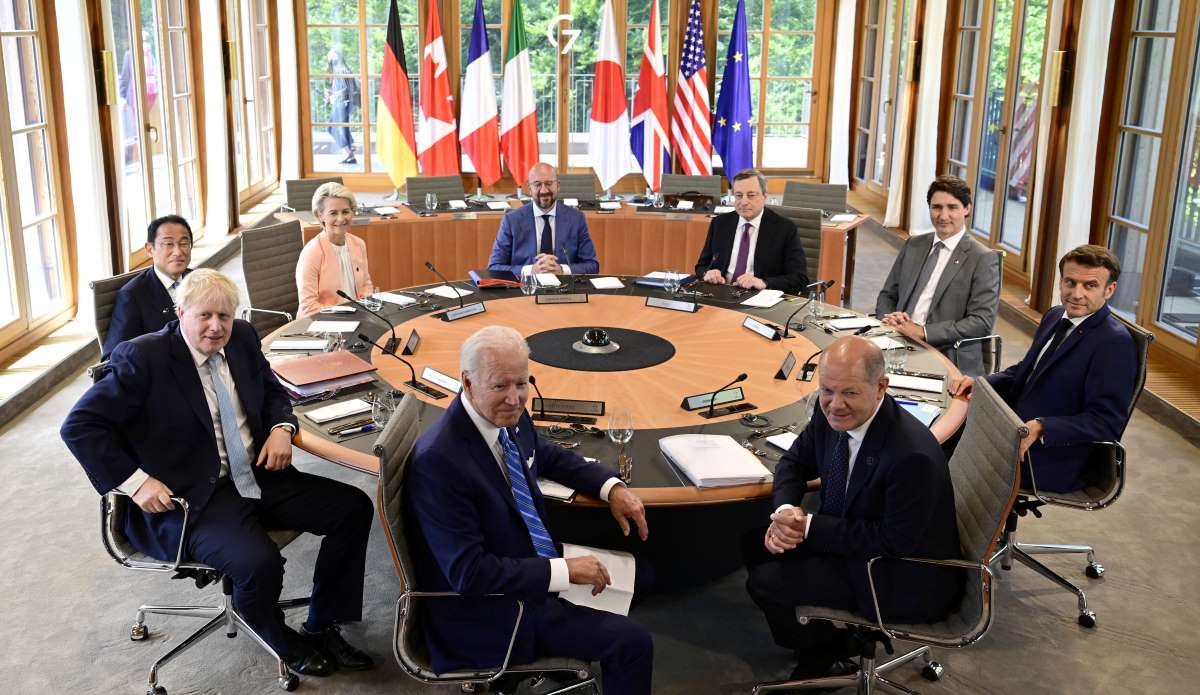 An impasse on the West’s economic and financial sanctions against Russia was highly visible at the recent G7 summit. It is not only Russian President Vladimir Putin who is sneering at this situation. The same may be said of Chinese President Xi Jinping, General Secretary of the Communist Party of China.

Purporting to respond to Russia's repeated brutal attacks on Ukraine, the G7 Leaders’ Communique issued in Elmau, Germany, on June 28 offered very little. The only notable aspect of additional economic sanctions in it was consideration of capping the price of Russian oil imported by sea.

British Prime Minister Johnson announced before the summit that an agreement had also been reached to ban imports of Russian gold. But there was no mention of this in the Communique. The three Anglo-Saxon nations of Britain, the United States, and Canada, as well as Japan, are close to banning imports of newly mined or refined Russian gold. But Germany, France, and other members of the European Union (EU) have been unresponsive.

The report weakly states that the setting of a cap on oil import prices is “under consideration.” If the international oil market rises in tandem with the gradual reduction of Russian oil imports as proposed by Japan, the US, and Europe before the summit, Russia's oil revenues could simply increase further. This would hit household budgets not only in the West, but also in low and middle income countries.

So, while the proposal is to prohibit the import of Russian oil at prices that exceed the limit, countries outside the G7 are unlikely to participate.

To get around this, a proposal has been put forth to limit the amount of insurance a ship can lawfully secure to the ceiling price the G7 countries set on oil. This would apply to tankers carrying Russian oil and theoretically discourage the higher prices. But this, too, is not very practical.

Headquartered in London, the Lloyd's Insurance Association is the main insurer of transport ships carrying international cargo. But it is a free market organization that earns huge profits by setting reinsurance premiums based on the risk of unforeseen shipping accidents.

It is not a system designed to determine the suitability of providing insurance based on the price of oil imports. And it is neutral in international political conflicts. For these reasons, it is unlikely to readily respond to a G7 request.

Regardless of whether a cap is set or not, China is now the leading importer of Russian oil. And it is benefiting from the G7's gradual reduction of Russian oil imports.

China's imports of Russian crude oil have been surging ever since Western sanctions against Russia began following the invasion of Ukraine. According to Chinese customs statistics, the volume of oil imports exceeded 2 million barrels per day in May 2022, up more than 40% from February. The unit price per barrel was $92 USD in May, down $6.5 USD from the previous month.

China’s imports are more than $20 USD cheaper than the international crude oil market price ー over $114 USD per barrel, according to OPEC statistics ー which has remained at a high level.

As for gold, there is a tremendous craving for gold among wealthy Chinese people. In addition, the People's Bank of China is trying to increase its holdings of gold as a foreign exchange reserve asset.

When Russian gold is shut out of the London market, it is obvious that China will decide that it is a good time to buy and will purchase large quantities at low prices. In other words, the more the West sanctions Russia for both oil and gold, the more favorable it becomes for China.

Russia has been accumulating yuan-denominated assets in response to the increase in oil exports to China.

According to Russian government statistics, the government-owned National Welfare Fund, which is financed by oil export revenues, had RMB-denominated assets worth $45.8 billion USD in May. This represents a rapid increase from the $16.8 billion USD worth of RMB assets it reported in March.

Perhaps due to information controls by both sides, this is the only publicly available data. Still, it indicates a steady deepening of economic ties between China and Russia.

Meanwhile, the data demonstrates the ineffectiveness of Western sanctions against Russia.

After Russian troops crossed the Ukrainian border on February 24, the United States, Europe, and Japan imposed financial sanctions, causing the ruble ー the Russian currency ー to plummet and Russian interest rates to rise sharply. However, the ruble has strengthened since April, and in late June the ruble's exchange rate against the US dollar and the euro was higher than before the invasion of Ukraine.

Russian interest rates have also returned to pre-invasion levels. Commodity prices are high but appear to have passed their peak. Russia's foreign exchange reserves, which stood at about $640 billion USD as of late February, had fallen by about $60 billion USD by late June and then stopped falling.

Reversing the decline in foreign exchange reserve assets is the result of market intervention to buy the ruble. But such intervention can no longer be seen as minimal.

The summit communique calls on China to demand Russia's immediate withdrawal from Ukraine, but it seems to just be words without any expectation of an actual response.

Unless the statement includes a warning to China that the G7 leaders will consider a second round of sanctions if China does not immediately cease its cooperation with Russia, it will not have the slightest effect on the Xi Jinping administration.

Find other economic analysis by Hideo Tamura in English here.