What Works and What Doesn’t? Fumi Kimura’s Thoughts on Opening Kogei to the World 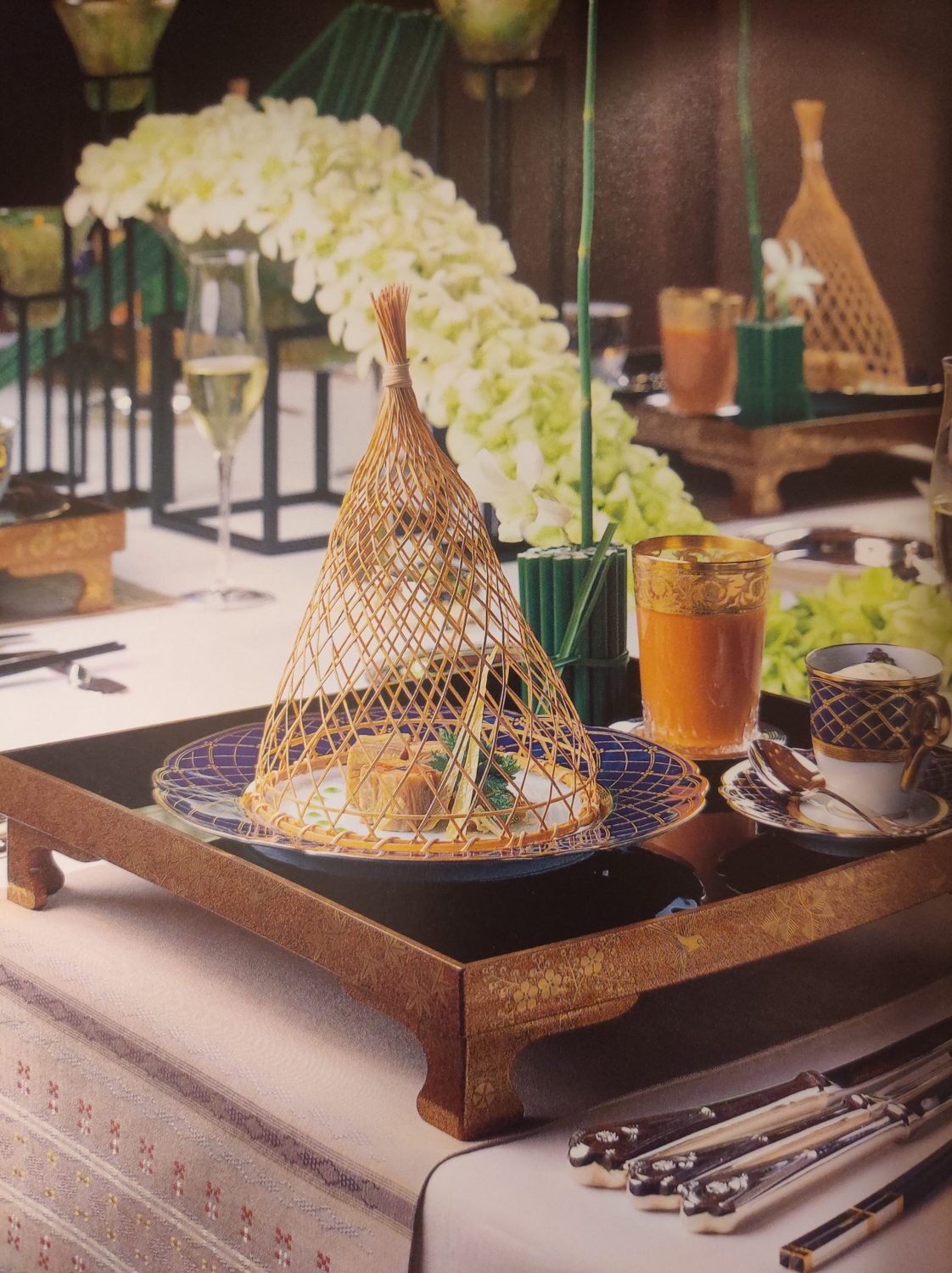 Dinner table at the Okinawa Shuri Castle in 2000, from the book: "musubu, The Works of Fumi Kimura," courtesy of the author.

(Sixth in a series)

Imagine you are the prime minister at a leaders’ summit in a foreign country where dinner is always one of the events. While dining on local delicacies as you ponder global issues, you might not have time to take notice that the whole environment of the room has been thought out to the last minute detail: the colors, smells and tastes are part of it, but so is the seating, cutlery, menu paper, room decor, and of course the theme of the dinner.

Have you ever thought of who is behind the design of such an event?

One such person in Japan is Fumi Kimura.

Having worked in floral design in New York and London, and specializing in table setting and coordinating, she is the founder of the company EDUCE.

In the example here, she was behind the design of the prime minister’s dinner at the Okinawa Shuri Castle in 2000, as well as the G20 summit in Osaka in 2019.

JAPAN Forward caught up with Kimura to learn more on August 13, sitting down with her in the lobby of a hotel which her company helped design: the Hyatt Centric in Kanazawa.

She interacts with local craftsmen to express Japanese culture, using kogei in her designs for the different venues, and is uniquely qualified to speak about what makes Japan’s craft appealing to the world.

Drawing from her unique experiences she shared her views of the differences of the views on kogei in Japan and craft the West, and ways to enjoy them going forward.

Differences in Western and Japanese Sensibility

As we sit down, Kimura firmly highlights her desire to talk about kogei, broadly speaking Japanese craft, and the strong differences she perceives between Japan and the West.

“In essence, the way of making hotels in Asia, compared to Europe and America, is very different.”

She elaborated, giving examples in terms of dining experiences, and table setting.

In the case of the plates used, for example. “In the West different plates have different functions. There is the fish plate, the meat plate and so on,” said Kimura. “In Japan, there are some plates that have functions, for example a tea bowl, but there is also a lot of diversity. There are many vessels that can be used in different ways.”

And the EDUCE CEO commented that the Japanese presentation is finding its way abroad: “ I can already see that this way of doing things is having an influence on chefs abroad, who are adopting a Japanese sensibility.”

She was introduced to us in the context of the International Hokuriku Kogei Summit in Ishikawa Prefecture, an annual symposium focusing on the appeal and the future of Japanese craft.

On the approach to crafts, she spoke from her experience: “Even with traditional crafts, the approach is very different [between Japan and the West].”

She explained: “If you work with a craft maker in France, they ask you for what size, what thickness, what exact color, and then once you give them that information, they deliver the perfect polished product.”

She then made the comparison with her home country: “In Japan, you give them a rough idea. Then they start making the bowl, and adjust as they go, same with thickness, with color. And the final product is very different.”

“In the West, they tend to look at things rationally, through data. What works and what doesn’t, then they decide,” mused Kimura. ”In Japan, they use their feelings as well, it’s very different.”

Kimura, however, also sees practical issues facing craftsmen in the industry and draws from her experience to discuss some approaches to them.

She stressed in particular the need to focus on the purpose of the product, and to keep the audience in mind.

“I think the real craft is in the middle between mass production and fine art. Yet, there are craftsmen who think they are fine artists, and that is problematic, it doesn’t go well.”

She continued: “But then, there are also craftsmen who have one product that sells well, then they think: ‘let’s make lots of this.’ In other words, a craft product becomes a mass product, and it risks becoming cheap and not getting sold.”

In conclusion, she highlighted the importance of keeping “feeling” in the products in an era when 3D printing and making copies is at everyone’s fingertips.

As she aptly summarized this idea during the International Hokuriku Kogei Summit: “I want [Japanese craftsmen] not to give up the aspect of putting feeling in their work, even if it seems nantonaku (approximate). Because that is what gives the objects flavor, and that is what people want.”

Enjoying Craft, and the Future of Kogei

It was interesting to hear Kimura’s opinion on craft products. She brought up one product she values in particular:

“There is Ontayaki pottery from Oita prefecture, which really had a strong influence, for example, on Bernard Leach [at the beginning of the 20th century], who came to Japan and helped in the revival of everyday objects with the Mingei movement.”

“Now, Ontayaki is treated as kogei, and I think it’s very approachable, even for people coming from abroad,” she concluded.

She also showed appreciation for Mashikoyaki pottery from Tochigi prefecture for the same reason.

Kimura also took the opportunity to send a message to people interested in learning more about Japanese kogei.

“Regarding vessels and plates, I think people should just challenge themselves and start using them without overthinking too much,” said the EDUCE CEO.

She continued: “In Japan we often change the vessels depending on the season, so I think it would be good if people kept that in mind, and try something different in summer compared to winter.”

“It’s a way of introducing Japanese kogei in everyday life, and a way of doing it is also a way to enjoy the craft, really,” said Kimura smiling.

She then expanded her suggestion for other types of products: “For something like Kimono, it’s trickier to tell people ‘please just wear it.’ As a stepping stone, these days the idea of a stole is quite fashionable, it’s good to start with something like that.”

“If people use good products, they start to understand what is good and what isn’t,” she reflected.

Finally, she spent some time reflecting on the future of Japanese craft.

“In order for something to be showcased, you need for people to look at it. And in that sense, if there are many objects in a hotel for international guests to see, hotels are a great vehicle,” she explained.

However, Kimura concluded that it was also important for Japanese to take more ownership of their culture. “I think we need also for Japanese to be aware of these crafts, and for the Japanese to start using them. If that happens, then it’s also easier to showcase them to the world.”