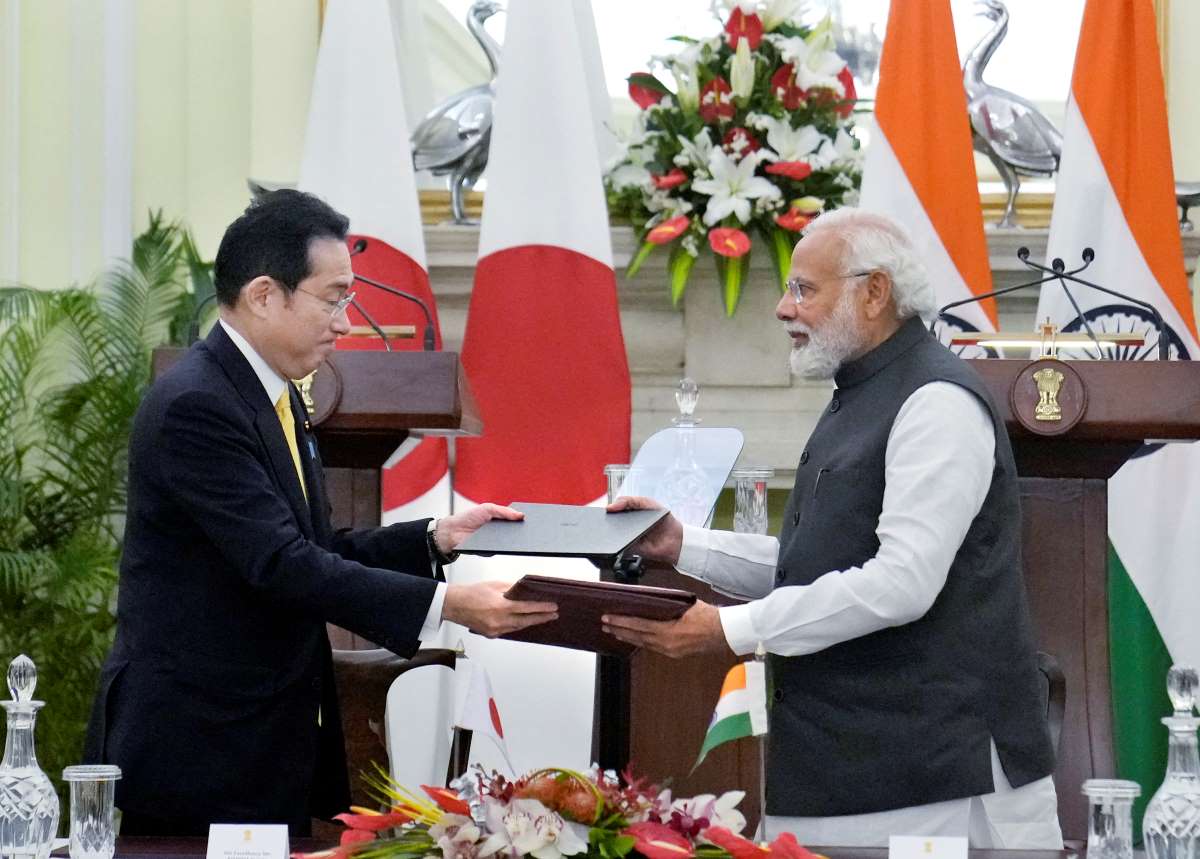 Indian Prime Minister Narendra Modi, right, exchanges agreements with his Japanese counterpart Fumio Kishida during a signing of ceremony after their meeting in New Delhi, Saturday, March 19, 2022. Kishida Saturday said his country will invest $42 billion in India over the next five years in a deal that is expected to boost bilateral trade between New Delhi and Tokyo. (AP Photo/Manish

Japan-India economic ties have been forging a different trajectory from those on the political front. While the political ties have seen many rapid developments, the same cannot be said of the economic side.

In an early move, the two nations had signed a Comprehensive Economic Partnership Agreement (CEPA), which they implemented in August 2011.

Overall, Tokyo is the 5th largest investor in the Indian economy, providing a cumulative FDI (Foreign  Direct Investment) inflow of approximately $36,366.30 million USD during the period between April 2000 and December 2021. This amounts to nearly 6.58% of the total FDI inflow from across the world during this time.

What are the Challenges?

There are quite a few areas of challenge in the economic ties between the two countries.

Second, the defense ties between Japan and India have yet to pick up, while the trade basket between the two countries is extremely small. The much touted deal between the two nations for the supply of Japanese-made ShinMaywa US-2i amphibious aircraft has yet to fructify.

This is after the two countries have come together in a host of forums on the defense front. India, Japan and the United States are part of the Malabar naval exercises, and the two countries are also conducting a large number of joint exercises between their armed forces, marking a big departure from the past.

There are many issues remaining to be addressed going forward.

At present in 2022, about 1,455 Japanese companies have branches in India. Among them are market leaders—for example Maruti-Suzuki in the automobile market. The two countries have also reached an agreement for a Bilateral Swap Arrangement of $75 billion USD.

There are some big ticket projects between the two countries, like the Mumbai-Ahmedabad High Speed Railway development. This project is also important for Japan since it has been trying to export its high-speed railway technology to other countries and hasn’t had any success in Southeast Asia. It will change the face of railway travel in India, which has followed the British colonial pattern up to now.

Japan is investing in a big way in Northeast India with the Japanese agency Japan International Cooperation Agency providing a loan of almost ￥25.5 billion JPY ($200 million USD) to construct a bridge between Dhubri in Assam and Phulbari in Meghalaya, both in Northeast India. It is set to be India’s longest bridge at 19 kms.


Pairing Elsewhere in the Region

It is also important to link up Japanese investments in Myanmar and Bangladesh with those in India, especially in the Northeastern part of the country.

Infrastructure development could be the next big thing between the two countries. Japan and India have already agreed to collaborate in Africa through the Asia-Africa Growth Corridor, though as of now nothing concrete seems to have come out of the same.

It was during the visit of the former Japanese Prime Minister Shinzo Abe to India that Tokyo pledged “$35 billion USD in investment in India’s public and private sectors over the next five years as well as to double the number of Japanese companies operating in India”.

During the recent visit of Japanese Prime Minister Fumio Kishida to India for the annual India-Japan summit, Japan has agreed to invest $42 billion USD over the next five years. They also announced that they have already achieved the target of $35 billion USD in Japanese investment that had been pledged in 2014.

What Japan-India economic ties really need at this moment is some heavy lifting from both the sides.

While the risks are no doubt high for Japanese companies investing in India, what they need to look at is the long-term picture with India boasting of a huge demographic dividend and a burgeoning middle class.  The Asian Development Bank has projected the Indian economy to grow by 7.5% in the 2022-23 financial year, and accelerate to 8% in 2023-24. Japanese companies need to keep that long-term picture in mind. Tokyo should not miss the forest for the trees.

Dr Rupakjyoti Borah is a Senior Research Fellow with the Japan Forum for Strategic Studies, Tokyo. The views expressed are personal.