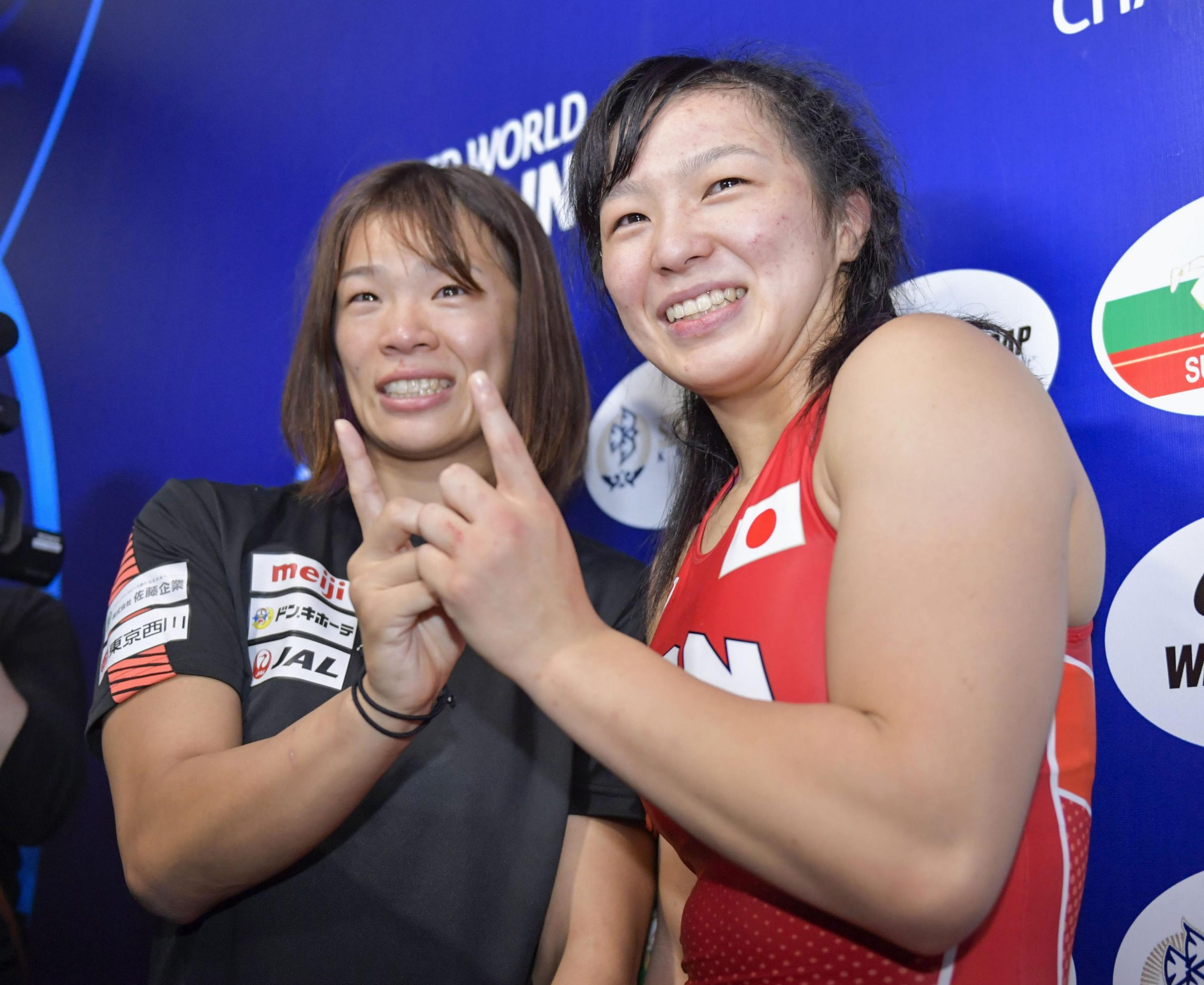 Risako Kawai (left) and Yukako Kawai at the World Wrestling Championships in September 2019 in Kazakhstan.

With the legendary duo of Saori Yoshida and Kaori Icho no longer competing, the stage is set for new stars to emerge on Japan’s women’s wrestling team at the Tokyo Olympics.

Japanese wrestlers are set to compete in 12 of 18 categories at this summer’s Tokyo Games, including all six women’s weight classes.

Few athletes have dominated their sports like Yoshida and Icho did over the years.

While many hoped Yoshida would be able to compete in Tokyo, she announced her retirement at the age of 36 in January of 2019, just 18 months before the Games, which were originally scheduled for the summer of 2020.

She retired as the most successful wrestler ー male or female ー of all time.

Icho became the first female in any sport to win individual-event gold at four consecutive Olympics and was awarded the People’s Honor Award for her achievements. Yoshida was also a recipient of the prestigious award.

The president of the Japan Wrestling Federation has set the ambitious target of 10 medals, including five gold at the July 23 to August 8 Olympics.

Freestyle wrestler Risako Kawai, who won the gold medal in the women’s 63-kg category at the Rio Games, headlines a Japan women’s squad that is expected to contend for medals in every weight class.

“My goal is to win a gold medal,” Kawai said during an online interview ahead of the Games. “I want to win consecutive titles.”

The 26-year-old Kawai will be competing in a new weight class at the Tokyo Games, moving down to 57 kg. She defeated Icho at that weight during the national championships in 2018.

She then secured her Tokyo 2020 berth, and knocked Icho out of contention in the process, by reaching the finals in her weight class at the world championships. Kawai beat China’s Song Ningning in the final to claim the world title.

Kawai said the delay in the Games was difficult at first but she has been able to adjust with the support of the people around her.

“After the Games were postponed, I asked myself ‘can I really do this?’ ” Kawai said. “But with the support of my family and having my coach and my sister around me made me feel motivated.”

In a selfless move, the star wrestler moved down a weight class so that her sister, Yukako, can compete in the Olympics in the 62-kg category. Yukako is a 2018 world championship silver medalist in that weight class.

“I chose this path so that my sister and I can go to the Olympics together,” Kawai told United World Wrestling.

Another top prospect for Japan is Mayu Mukaida. She traveled to the Rio Games as the sparring partner of Yoshida. Having developed solid skills against the most decorated female wrestlers of all time, Mukaida is now ready to step into the spotlight.

Mukaida won the non-Olympic 55-kg division title in her world championship debut in 2016.

The 24-year-old Mukaida secured her Olympic berth by placing second in the 53-kg event at the September 2019 world championships in Kazakhstan.

Women’s freestyle wrestling was introduced as an official Olympic event at the 2004 Athens Games. Japan has dominated the event in every weight class, winning 11 gold medals out of the possible 18 along with three silver and two bronze.

Wrestling (69 total medals) is the second-most successful Olympic sport for Japan, behind only judo (84).


Another gold medal hopeful for Japan is Sara Dosho, who competes in the 69-kg heavyweight category. Dosho, the Rio Olympic champion, overcame a series of agonizing injuries to book a place at the Tokyo Games.

She dislocated her shoulder at the Wrestling World Cup in Gunma Prefecture in March 2018. Dosho had surgery in April, and took time off wrestling for about five months.

Clinching back-to-back Olympic victories won’t be easy but Dosho is determined to do everything she can to repeat by relying on her trademark tackle wrestling experience.

The other women competing for Japan are Yui Susaki (50 kg) and Hiromi Minagawa (76 kg).

A lot of Japan’s competition in women’s wrestling will come from China and the United States, which placed second at the 2017 world championships and third in 2018 and 2019.

The U.S. women’s freestyle wrestling team is headed by Helen Maroulis (57 kg), who beat Yoshida in Rio to put a halt to her winning streak and claim the first gold in the event for an American woman.

Wrestling at the 2020 Games will be held from August 1-7 at Makuhari Messe in Chiba Prefecture.