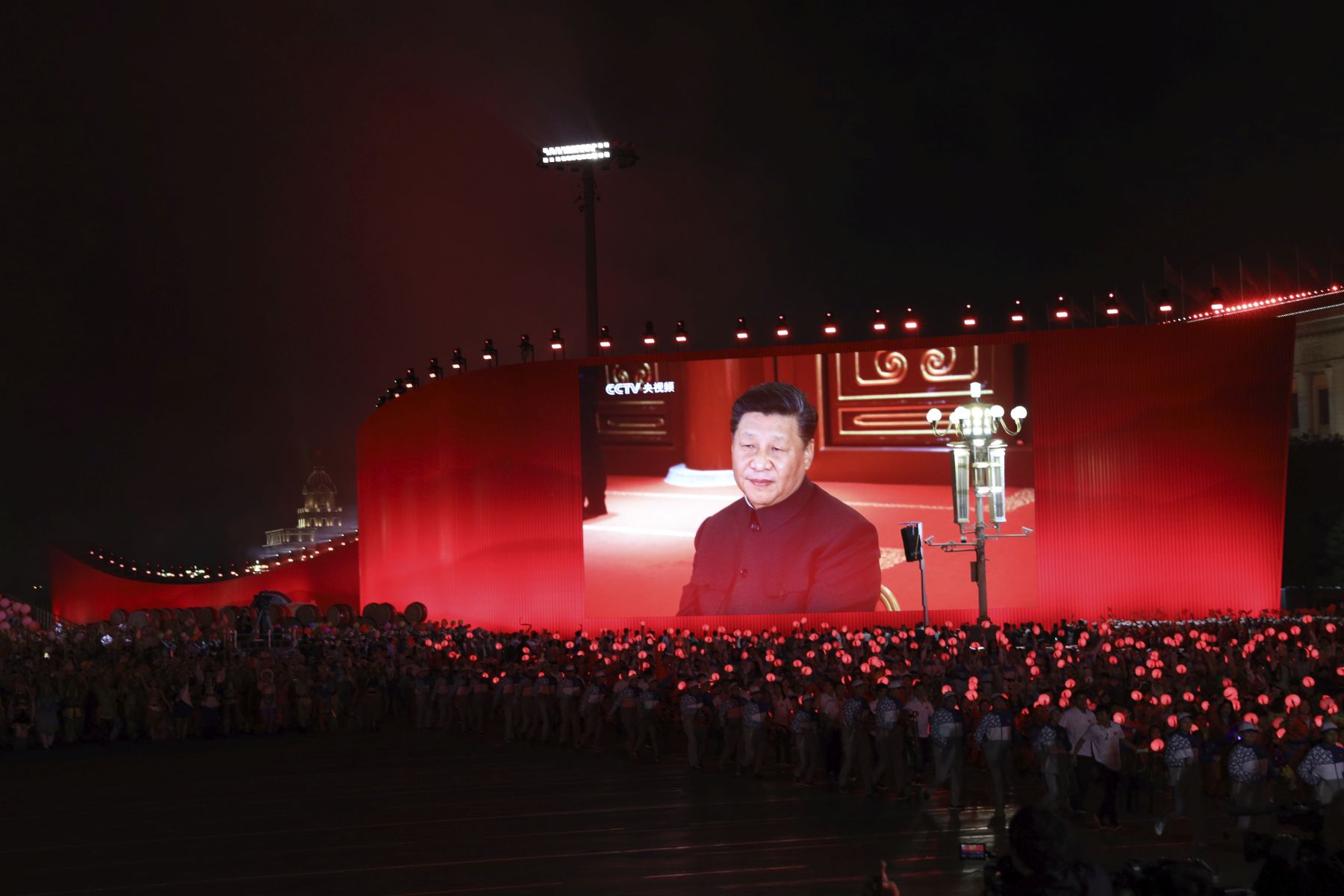 Chinese President Xi Jinping is displayed on a screen in Tiananmen Square where leader Mao Zedong declared the founding of the People's Republic of China in 1949 and where pro-democracy protesters rallied in 1989 before being quashed by the military in a bloody crackdown. October 1, 2018 (AP Photo/Ng Han Guan)

“Constitutional monarchy, imperial restoration, parliamentarism, a multi-party system and a presidential system” listed Xi Jinping, President of the People’s Republic of China, at the College of Europe in the Belgian city of Bruges in April 2014.

“We considered them, tried them, but none worked” he announced, in defense of the non-democratic nature of his as of then one-year-old reign.

There is much which is problematic about this summation. The presidential system referred to by Xi is presumably the office of president set up after the 1911 revolution in preparation for elections in December 1912. It was held at first by Sun Yat-sen and subsequently, by military strongman Yuan Shikai.

“Parliamentarism” surely pertains to the intent of the 1912 elections. They would most likely have vaulted Song Jiaoren, the initial president of the dominant Kuomintang political party to the prime ministership, if not for his assassination. The assassination order reputedly came from President Yuan Shikai himself, ensuring that Chinese democracy would be stillborn.

Xi’s cited era of multi-party government must also relate to these handful of years during the 1910s, and may additionally encompass the attempt of United States Secretary of State, George C Marshall, to negotiate an accord between the Communists and Nationalists during the failed "Marshall Mission" of 1945 to 1947.

Marshall’s accord, however, was little more than a framework that was dependent upon a power sharing agreement. It was never operative in a meaningful form and rapidly dissolved after Marshall’s mediation collapsed

China’s brief foray with democracy in the early 1910s followed the collapse of the Qing dynasty, during which “constitution monarchy”, referred to by Xi, was attempted. The democratic experiment was succeeded by an era of warlordism, after the National Assembly was dissolved.

Over the next two decades a deeply fractured China would coalesce into two principal political and ideological movements: the Communists under Mao Zedong and the Nationalists under Chiang Kai-shek. Neither paid heed to the democratic process. The Communist took power in 1949 as a result of victory during the Chinese Civil War.

To give Xi his due, the system of the government under which he had risen to power was preferable to any administration of the previous one hundred and fifty years. It had enabled stability, the peaceful turnover of leadership, economic growth and an ever-expanding middle class.

A foundation of the system was term limits for the national leader — a stipulation that the president of non-democratic China could only serve a maximum of two 5-year terms.

It was somewhat ironic that the notion of presidential term limits was shared by non-democratic China and the most identifiable bulwark of democracy, the United States of America. While not codified until 1951 via constitutional amendment, a tradition of two 4-year terms had been established during the early days of the US republic.

The rationale was best set out by Thomas Jefferson during the second term of his own presidency when he cautioned that the probable epilogue to an extensive tenure of national leadership is “an inheritance”, as history has so often shown.

As well as denying ambitious would-be national leaders a timetable towards the potential fulfillment of their goals, long term leadership is commonly followed by the installation of a political crony, often a son. A change of policy direction will generally only occur via a disruptive or destructive process that may negate much of what the long serving leader achieved.

The US has avoided this fate over the past two hundred and fifty years. Many nations have not. The Russian people may find themselves obliged to endure it before very long.

Making of an Emperor

Xi Jinping’s speech at the college of Europe was made during the second year of his first 5-year incumbency. As that term came to an end in 2018, he pushed through a constitutional amendment abolishing the two 5-year term limit.

It is widely expected that 69 year-old Xi will retain the presidency at the upcoming 20th National Conference of the Chinese Communist Party on October 16, 2022. It is further tipped that he will attempt to remain president for life, essentially becoming a 21st century emperor.

It is notable, therefore, that within Xi’s 2014 speech, his list of failed options included “imperial restoration.”  This was attempted in 1915 when Yuan Shikai, having ridden the republican movement to the presidency, re-established dynastic rule.

Yuan’s empire, however, would last a mere 83 days, when one by one the provinces reasserted their independence before even his own henchmen deserted him. A broken man, Yuan Shikai died of uremia within weeks of abandoning his imperial dream.

Questions can be raised about the ease with which Xi Jinping dismissed democratic systems of government during his 2014 speech. But on the issue of imperial restoration, he was most surely correct.

Accordingly, he would do well to ruminate upon the experience of the unfortunate Yuan Shikai before aspiring for what the Chinese nation did not permit then and may still not allow.

Xi Jinping might also reflect on the sermon of the Archbishop of Canterbury, Justin Welby, at the funeral of Queen Elizabeth II on September 19. In the presence of much of the world's royalty and leadership, including Chinese Vice President Wang Qishan, Welby made note that “those who serve will be loved and remembered, when those who cling to power and privileges are long forgotten.”