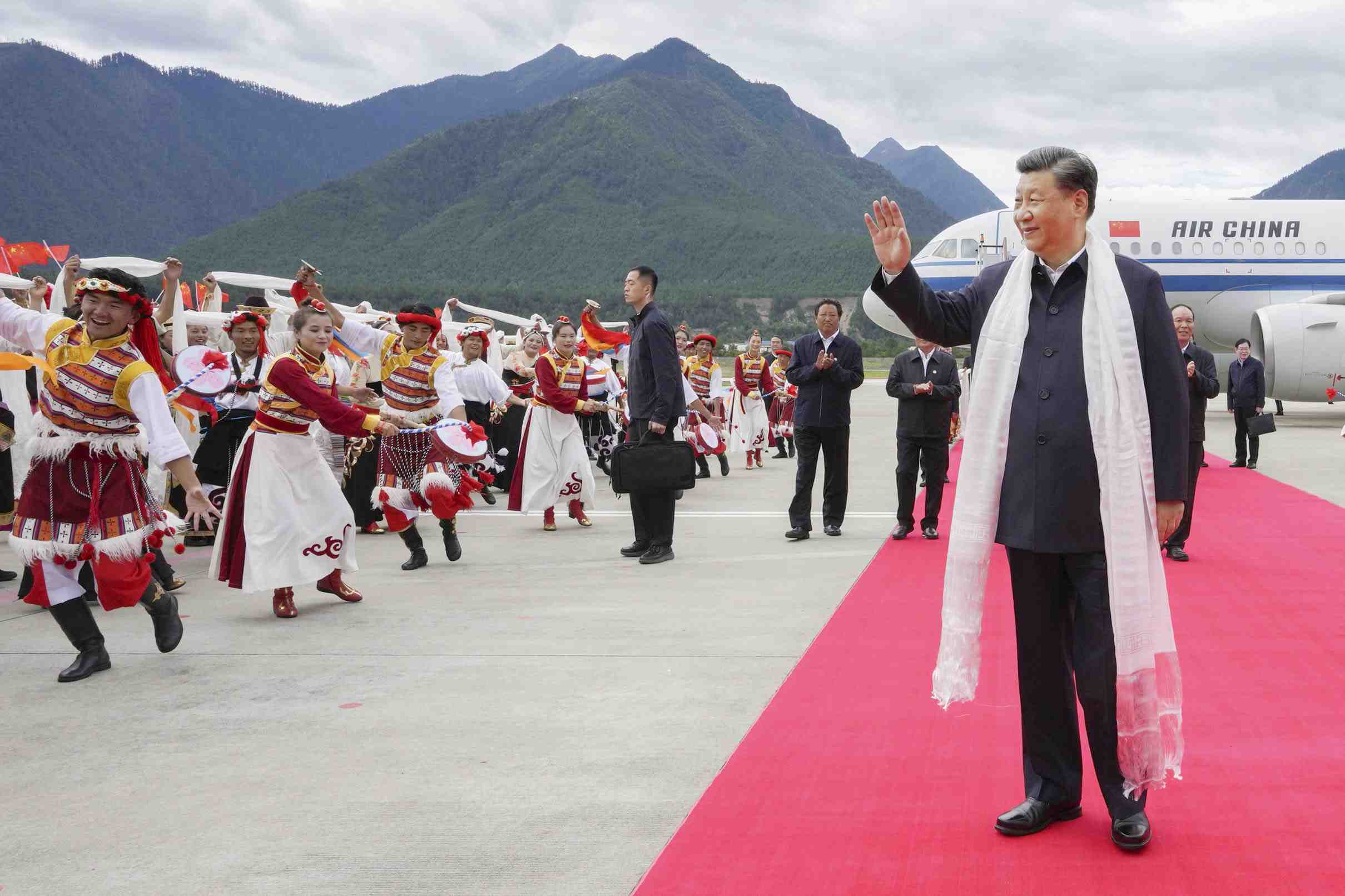 Chinese President Xi Jinping visited Tibet in July 2021. During this visit, Xi, who is also General Secretary of the Communist Party of China, met with high-ranking officials of the Tibet Military Command and reviewed development projects, according to the official communique.

His visit comes on the heels of the 100th anniversary of the founding of the Communist Party of China (CCP), which was celebrated on July 1 this year.

This was the first visit by a Chinese President to Tibet in 30 years. What is also worth noting is that he visited places like Nyingchi, which are very close to the LAC (Line of Actual Control)with India. China has been trying to signal that it controls the levers of power and influence in its outlying regions and this visit presented an opportunity to President Xi Jinping to do so.

This visit also comes after the Prime Minister of India conveyed wishes to the Dalai Lama on his birthday, July 6. This is the first time he had done so publicly since 2015.

Second, in addition, the visit allowed China to showcase its model of development, illustrated by the fact that Xi Jinping chose to travel by high-speed train from Nyingchi to Lhasa in Tibet. China has argued that its takeover of Tibet has improved development levels there ever since its annexation, which is termed as the “Peaceful Liberation of Tibet” by Beijing.

Third, the visit was designed as much for the domestic audience as the international audience. This could also mean that China is ratcheting up the tension on the Tibet front, which has generally been regarded as a secondary theater, after the Taiwan theater.

Fourth, for a long time now, India has given shelter to the Tibetan government-in-exile and this has been a thorn in China’s side. For this reason, Chinese President Xi Jinping may have chosen to visit Tibet to send a message to India. New Delhi has sheltered the Dalai Lama since 1959, after a Chinese crackdown on Tibetans.

There is a lesson here, which is that China is not going to yield an inch on territorial claims.

This means that democratic countries like India, Japan, the United States and Australia need to develop a concerted strategy when it comes to the Tibetan cause. The Dalai Lama is also ageing and China is sure to raise a ruckus when it comes to the anointment of the next Dalai Lama. Countries like India and Japan, which have sizable Buddhist populations, need to consider and prepare a specific succession plan.


Why Tibet is Important for China

Tibet is important for China for a host of reasons.

First, the Tibetan plateau is the source of many of Asia’s major rivers and control over water gives China an edge when it comes to geopolitical stakes.

Second, China has set up many military bases in Tibet and it has the advantage of height. Tibet is a very useful springboard when it comes to the India front, as well as with Southeast Asian countries.

Third, along with Xinjiang, Tibet is one of those regions where China’s control is still tenuous, and Xi Jinping would like to reinforce the perception of control. While China’s brutal repression in Xinjiang has attracted global attention, Xi would like to show a more “benign” face of China with regards to Tibet.

Fourth, the majority of the Tibetan population is Buddhist and religion is anathema to China’s communists. Hence, slowly but surely, China has been clamping down on religion in Tibet. It has to be borne in mind that China has always seen religion as a threat, whether it from Christianity, or Islam in Xinjiang, or from home-grown groups like the Falun Gong.

The main idea behind the recent Chinese moves is to keep India bogged down along its northern borders and reduce its options vis-à-vis its ties with China. Hence New Delhi must be careful with any redeployment of troops. Any strategy such as a sudden withdrawal of forces from the Pakistan border to the Chinese border could actually be a trick played by China.

It is worth noting here that China and India had clashed in the Doklam region of Bhutan back in 2017. Last year, the two sides had a major skirmish in the Galwan Valley, which took the lives of both Indian and Chinese soldiers, the first in 45 years.

For India, Tibet is the source of rivers like the Brahmaputra, which flow into Northeast India before entering Bangladesh. As of now, India and China do not have a water-sharing treaty and this could emerge as a big issue in the future.

The fact that Xi Jinping could land with his entourage at the Nyingchi Mainling Airport, which is close to the LAC with India, shows the remarkable advances in infrastructure on the Chinese side of the border.

It also has to be borne in mind that successive governments in India in the past have deliberately avoided improving the infrastructure in Northeast India, given the threat from China as had happened during the 1962 Chinese aggression. However, although that development reluctance has changed now, there is a long way to go on the infrastructure front when it comes to Northeast India, especially in the border state of Arunachal Pradesh.

President Xi Jinping’s recent visit to Tibet serves to underscore the fact that China still has some tricks up its sleeve. Hence, it is high time for India to be keeping a sharp eye on developments in Tibet.

At the same time India and countries like Japan should raise their voice about the plight of ordinary Tibetans at international forums.

Dr. Borah is a Senior Research Fellow with the Japan Forum for Strategic Studies in Tokyo. The views expressed here are personal. Find his articles on JAPAN Forward at this link and on Twitter @rupakj.