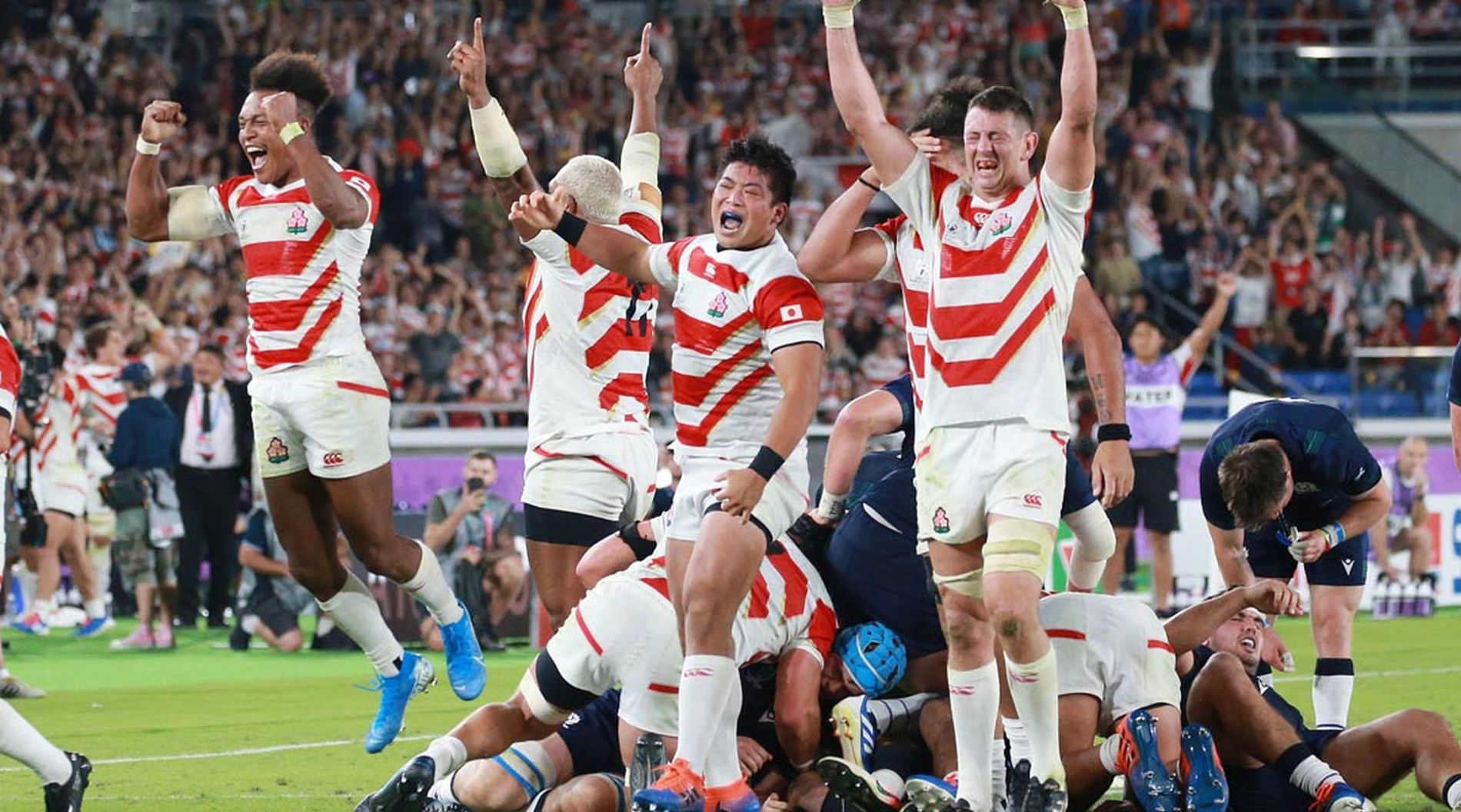 YOKOHAMA — Japan and Scotland played their fourth and last game of the pool round at the International Stadium Yokohama on Sunday night, October 13, amidst uncertainty after the forceful impact of Typhoon Hagibis the previous night.

The Brave Blossoms needed at least one losing bonus point to advance to the quarter finals, and Scotland wasn’t going down without a fight.

It was a nail-biter down to the final minutes of the game, and for the first time in history Japan moves on to the quarter final elimination rounds after their 28-21 win against Scotland put them on top of Pool A.

The game kicked off at 7:45 P.M., and Japan was already penalized in the first minute for not releasing the ball leading to a Scotland line-out within 25 meters of Japan’s try line. The possession was lost in mere seconds after an in-field kick was deflected and run down deep into Scotland’s territory.

Japan was penalized for an offside a couple plays later, and Scotland capitalized on another opportunity to drive their offense. Their efforts were rewarded as Finn Russel went over the line for the first try of the game in the 6th minute. Greig Laidlaw converted and Scotland was first on the board 7-0.

Japan reset and gained possession again from a strong defensive play. The Brave Blossoms worked within 2-3 meters of Scotland’s try line, but the defense stripped the ball and kicked it down the sideline, defusing Japan’s try line conquest.

In the 15th minute Scotland was called for a foul, and Brave Blossoms skipper Michael Leitch called on Japan’s top scorer, Yu Tamura, to take the penalty from almost 50 meters out. The kick missed its mark and Scotland fielded the ball, but only to give Japan’s fiery offense another attempt.

Quick crafty passes led to a busting run on the sideline by Kenki Fukuoka, who, after losing his balance from a tackle, offloaded with one hand to Kotaro Matsushima, who was supporting on the inside and had a clear path to the try line. Matsushima scored his fifth try in the World Cup, and Tamura converted easily.

The score was even at 7-7 apiece, and the crowd was loud as ever.

A few minutes later, Shota Horie made two strong plays on both ends of the field, breaking down the Scotland scrum and offloading the ball close to Scotland’s try line, leading to prop Keita Inagaki scoring a try under the posts. Tamura converted again, and Japan was in the lead for the first time in the match 14-7, with all the momentum in their favor.

It wasn’t Scotland’s night as they were penalized for engaging too early in the scrum. Japan was given a penalty and opted to kick for the goal. The winds were evidently still too strong, and Tamura’s kick went short of the crossbar.

Shortly thereafter, the Brave Blossoms regained possession, running the ball cross field, where it ended up in Center Timothy Lafaele’s hand. Scotland’s defense rushed up too quickly and left enough room for Lafaele to place a grubber behind the defense line.

Flying down the sideline was Fukuoka. Catching the ball in the air with one hand, he scored his third consecutive try in three games. Tamura converted from an almost impossible angle on the sideline, and Japan led 21-7 at the half.

Japan still had the momentum as the second half started, answering all of Scotland’s attempts at chasing the game.

Recently, Scotland came back from 31-0 down to pull off a draw with England in the 2019 Six Nations Championship. To do so this time, they would need to make history. No team has ever come back from 14 points behind at half-time of a Rugby World Cup match.

Scotland ran the ball early in the half, but their offense lost steam. They suddenly found themselves within their own half, where Fukuoka made a forcible strip, catching the ball then racing down the field to score his second try of the night — and punched a ticket for the Brave Blossoms to their first ever World Cup Quarter Finals.

Japan had dominated the game in terms of possession and territory up until this point, but suddenly Scotland had them on the back foot, scoring two quick tries. Props Willem Nel crossed over the line in the 49th minute, and Zander Fagerson rolled over in the 54th. Laidlaw and Russell both converted, and Japan’s lead was cut to a converted try difference 28-21.

The atmosphere changed as Scotland continued to claw their way back into the game, and Japan played desperately to protect their lead. The momentum had shifted and Japan’s offense couldn’t get anything going.

The drama continued for the Brave Blossoms as they were penalized for collapsing the scrum in the 75th minute, putting Scotland in another position to tie the game.

With three minutes to go, Matsushima fumbled a Scotland grubber in the try area and Scotland had the scrum feed 5 meters from the try line. The crowd was in a frenzy as Scotland was just minutes away from writing their own piece of rugby history by coming back from 21-7 and tying the game.

However, it was Japan’s headstrong defense that made a strong final push. The stadium rumbled as the Brave Blossom reclaimed possession of the ball and then wisely ran short drives until the clock ran out. A chorus countdown gave Japan the signal to kick the ball out of bounds, ending the game 28-21. No side.

The Brave Blossoms advance to the quarter finals for the first time in history. They will match up against 5th ranking South Africa, who they just lost to in a primer prior to this year’s Rugby World Cup on September 6. The score was 41-7, which gives Japan extra motivation to pull off a win in the upcoming match – when it matters most.

In a post game interview, Player of the Match award winner, Fukuoka, credited his energy to being in the starting lineup for the first time, saying, “I wanted to contribute to the team with my all.” It resulted in a double try performance, with his second guaranteeing a spot for the team in the quarter finals.

Fukuoka shared his thoughts for the upcoming match up, saying, “We will continue what we’ve done all this time, give it our best and show the world Japan’s brand of rugby”.

It was a great team effort for Japanese rugby and veteran Inagaki was surprised to cross the try line this evening. As he put it, “It was my first try in 7 years as a Blossom, and the guys were really happy for me.”

With a tough game around the corner, Keita Inagaki recognizes the Victory Road journey is going to be challenging, “Things are going to heat up in the next round, and we’re going to play hard. Thank you, [fans] for all your support.”

Although the next game against the Springboks will be demanding, Blossoms captain Michael Leitch had classy words to say about the situation, while also showing the nation of Japan his appreciation:

The game could’ve been easily cancelled in light of what transpired overnight, resulting in many deaths and people reported missing. Leitch continued to show gratitude:

For the first round of the quarter finals, newly ranked world #7 Japan plays South Africa on 7:15 P.M. (JST) Sunday October 20 at Tokyo Stadium.