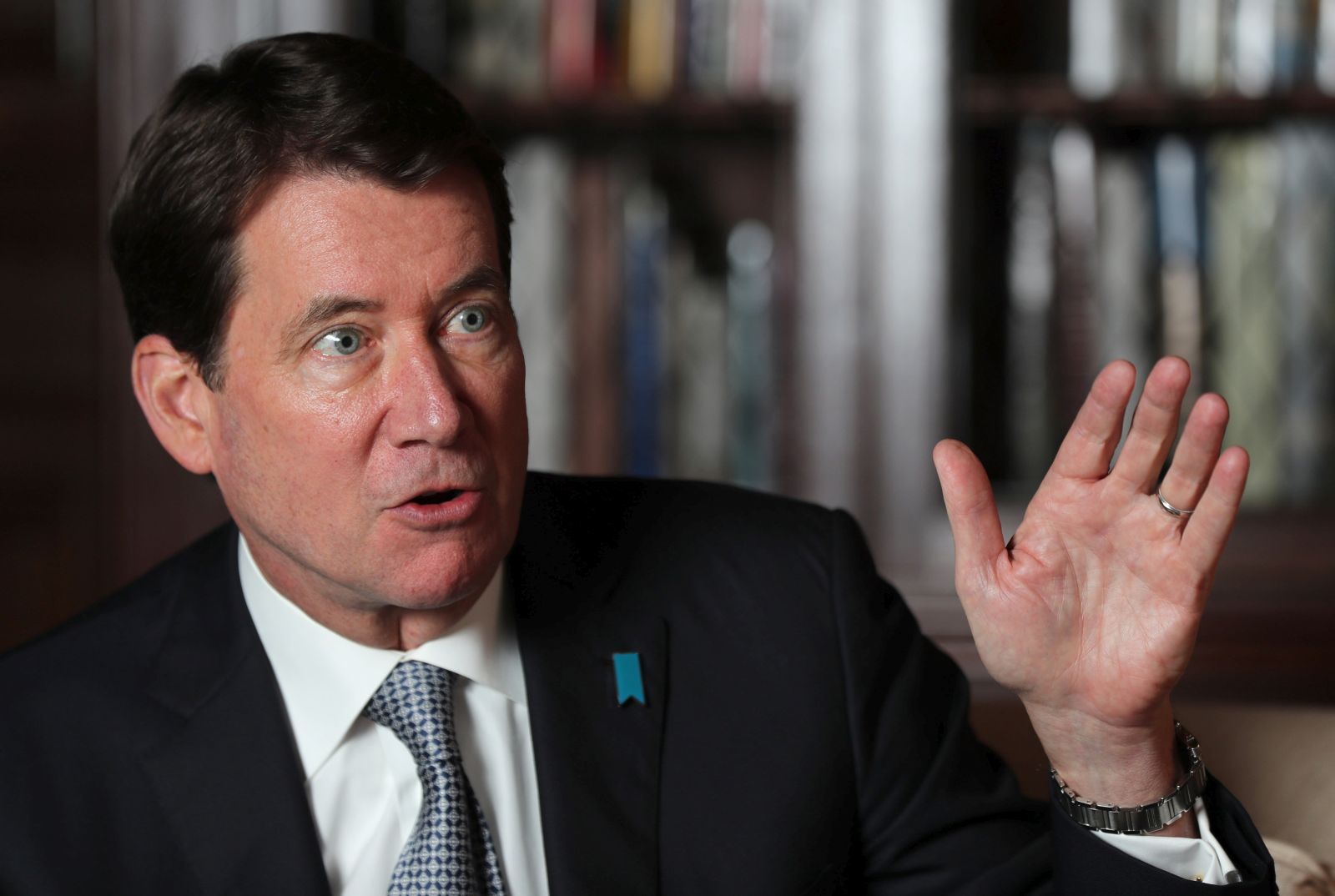 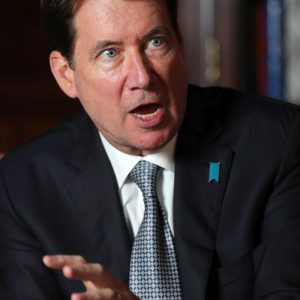 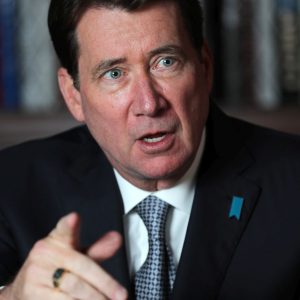 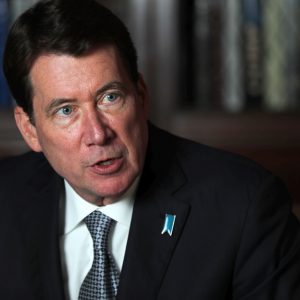 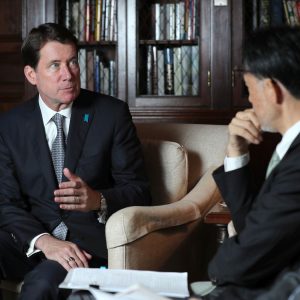 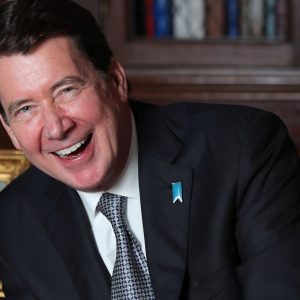 JAPAN Forward sat down with the American ambassador to Japan, William F. Hagerty, and discussed the United States’ relations with Japan, China, North Korea, and the ASEAN countries.

Ambassador Hagerty made clear President Donald Trump’s commitment to the issue of Japanese citizens abducted by North Korean agents over several decades, and also stressed on numerous occasions that the alliance with Japan is the cornerstone of the U.S. presence in East Asia.

The ambassador stressed in no uncertain terms that China’s behavior needs to change, and that America is not willing to compromise on that.

He also reiterated the U.S. commitment to developing Asian economies, while keeping a market-oriented policy.

Here are excerpts of JAPAN Forward’s interview with Ambassador Hagerty:

What is the most prominent outcome of the New York summit?

President Trump and Prime Minister [Shinzo] Abe have reaffirmed our commitment for the final, fully verified denuclearization of North Korea. Under President Trump’s leadership, but with the strongest support possible from Prime Minister Abe and Japan, we have come this far. Even President Moon [Jae-in] acknowledged this at the UN General Assembly. We are going to continue our strong efforts to achieve success.

President Trump suggested the possibility of a second summit with Chairman Kim Jong-un. What are your thoughts?

President Trump made it very clear that he’s not in the habit of meeting if it’s pointless. I don’t know the specifics, but I would read some optimism into the fact that he is considering the meeting.

Could you tell us any episode where you advocated for the issue of abductees to the President?

The President and I have discussed the abductees on several occasions. The President actually mentioned Megumi Yokota by name at the United Nations the last time he addressed the General Assembly. When he visited Japan in November last year, we went together to meet with the families. I think that the President’s view is that we have no closer ally and friend, that this is an important issue for the people of Japan, and that it’s something he is determined to press forward on behalf of Japan.

How do you think the issue will develop?

Japan has the proximity, the economic and technical knowhow to help North Korea see a much brighter economic future. But Prime Minister Abe has made very clear that the issue of abductees needs to be addressed in order to get to that point.

What will the breakthrough be for the abductees issue?

I think, in the first instance, creating the environment for the Prime Minister to negotiate is where we can help. The President has taken action to raise this directly with Kim Jong-un and in the media. The President also knows that Prime Minister Abe will be the best person to pursue this issue.

What about the question of trade and reaching a bilateral agreement?

I understand that there has been a long history of the Trans-Pacific Partnership (TPP). But, what we are talking about is having a trade arrangement with Japan which is commensurate with the U.S.-Japan security and diplomatic relationship we have, which is the strongest in the world. To have no trade agreement with Japan is unthinkable, in my mind.

Does it mean that there is not much time or room to negotiate?

We should make clear that, from a political standpoint, reentering the TPP is and has been a dead end for us. In 2016, then Barack Obama didn’t bring the TPP forward to the U.S. Senate for that reason. Neither [candidates] Clinton nor Trump pursued the TPP during the 2016 campaign. The domestic and political environment in the United States will not support that type of complex multilateral agreement. Rather than be idealistic and look backwards, we should be practical and look forward.

What are your thoughts on national security and budgets?

The President has been frustrated that the U.S. spends between 3.5% and 5.5% of its GDP every year on defense, while other countries have a hard time getting to 1%. It’s hard for me to explain to my children why the United States is subsidizing the defense of the rest of the world, when there are so many substantial costs at home. These are things we are trying to sort out domestically, but it’s putting pressure on the system. I think the President is trying to say that he would like to see everyone be more responsive in terms of undertaking our shared defense responsibilities.

The dispute between the U.S. and China seems to be escalating into a trade war. What are your thoughts regarding this?

I was extremely encouraged to see the joint announcement by Japan, the U.S. and the EU, to work to reform the WTO in areas such as e-commerce, intellectual property theft, technology transfer, state-owned enterprises, and subsidies. There are non-market behaviors in these areas that damage companies and workers. To see the three governments come together is a sign, and it’s acknowledging a problem that has been going on for a long time.

If you think about President Xi standing in the rose garden in 2015 with Barack Obama and saying that he has no interest in militarizing the Islands in the South China Sea – then look what has happened today. Someone has to stand up for the rules, and I am very grateful that the President is doing so.

What is the President’s attitude to China’s “One Belt, One Road”?

Using the term “Free and Open Indo-Pacific,” America wants to partner up with countries like Japan to take part in the development of critical infrastructure in this region of the world which is the most dynamic and has the most growth potential. But our approach is different.

China’s “One Belt, One Road” is very much government-centered. The U.S. and Japan’s role [in the “Free and Open Indo-Pacific”] will let the private sector lead. That has been the strength of our nations. You will see us offering world-class infrastructure in a transparent format, which isn’t debt laden but is economically viable.

[China’s] strategic investments that are not market-oriented, that come with an unsustainable level of debt, can create catastrophic results. We have seen examples of that in Malaysia, Sri Lanka, Pakistan.

Do you have a message for the South Asian Countries?

The U.S. and Japan are going to continue working closely together to find the opportunities to support infrastructure development in the most dynamic and economically exciting region in the world. We believe the way to do that is: engage our great companies with their great experience and business knowhow, and we’ll have truly sustainable infrastructure that facilitates the region’s dynamism and growth, and does so in an economically viable manner.

A particular project would send a clear message in the region, wouldn’t it?

I agree, and I expect to see some projects announced very soon. We signed an MOU in November 2017 between the U.S.’s Overseas Private Investment Corporation (OPIC) and Japan’s JBIC.

Prime Minister Abe is visiting China on October 24. Do you have any advice?

Comment on the Okinawa Election and American bases in Japan.

I am hopeful that we can make progress and that we can set politics aside to work on two fronts: cooperating with base-hosting communities on their safety and well-being, while ensuring that our troops remain trained and prepared to fulfill our security treaty obligations.

Prior to his nomination, Hagerty served as director of presidential appointments for the 2016 Trump Presidential Transition Team while on a leave of absence from Hagerty Peterson & Company, a private equity investment firm of which he was a founder and managing director.

Hagerty began his professional career at global management consultancy Boston Consulting Group, including three years in Tokyo, Japan. He subsequently served as CEO and board member of companies with extensive operations in Asia and Europe.

As a member of President George H.W. Bush’s staff, he served on the President’s Council on Competitiveness with a portfolio that included international trade. From 2011 to 2015, Hagerty was a member of the Governor’s Cabinet and commissioner of the Department of Economic and Community Development for the State of Tennessee.