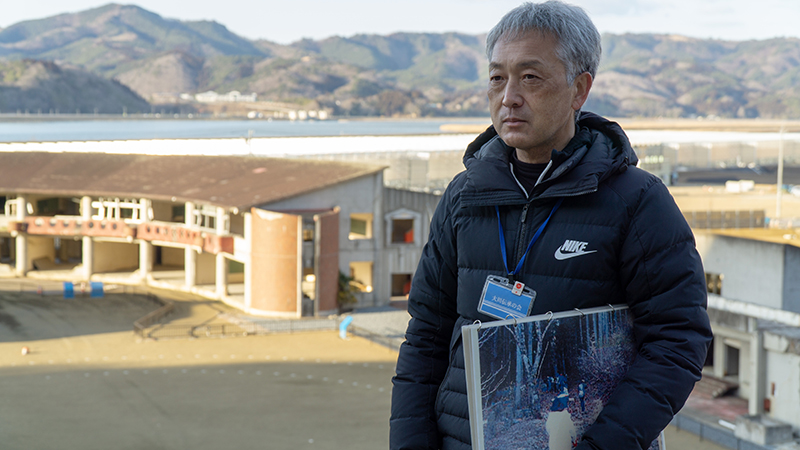 This interview is one of a series of articles on March 11, which marks the 10th anniversary of the Great East Japan Earthquake. What happened on that fateful day? What has happened since then? What does the future hold? Here we share the thoughts of people from many walks of life about this unforgettable tragedy.

“I want to run in the Olympic Torch Relay as if my daughter Mai were by my side,” said Noriyuki Suzuki.

Suzuki, 55, is from Ishinomaki, and a father who lost his daughter during the deadly tsunami that followed the earthquake which hit North East Japan in the afternoon of March 11, 2011. His daughter Mai was 12 years old.

Japan is preparing itself to host the Tokyo 2020 Olympics, and the Olympic Torch Relay is set to begin on March 25 in none other than Fukushima, one of the areas devastated by the March 11 disaster. And, of course, the torch will also go through Ishinomaki, about 100 km north in Miyagi Prefecture, where Suzuki plans to pass the baton.

Visiting the local areas of North East Japan, one perceives that the scars on the landscape and in the hearts of the people have started to heal. People are moving forward. But Suzuki is also a key figure in reminding us that we must not forget the lessons from the past.

And perhaps there is no location quite as poignant as the one where we are standing: the remains of Okawa Elementary School.

Ten years ago, this place saw the biggest loss of life under any school’s supervision at the time. Of the 78 students and 11 teachers present that day, only 5 people survived.

Suzuki talked to us about one of the most harrowing episodes to come out of that day, and what lessons we can learn for the generations to come.

At 2.46 P.M. an earthquake with magnitude 9 struck. For several minutes the earth trembled violently, and children took cover under the desks. As per protocol, the students were then evacuated to the courtyard.

“It was much colder than today. It was snowing, and the kids were outside, some of them were crying because they were afraid,” explained Suzuki.

Minutes later, teachers listening to the radio heard the tsunami alert. But this is where things got difficult. The Okawa Elementary School had a disaster protocol, but the instructions in case of a tsunami were unhelpfully vague. The teachers were left to debate among themselves what to do.

Later reconstructions tell us that some children suggested to teachers: “why don’t we run to the hill, Sir? If we stay here we will die!” But the terrified children were dismissed by their supervisors.

Eventually, the teachers made up their mind to evacuate the children to a traffic island on the road nearby, which is between the school and the river. However, at 3.37 P.M. that afternoon, a deadly wave of the tsunami rose from the river, heading right in the direction the children had started walking.

Some whirled around and tried to run, but they were caught between the hill and the water.

Out of the 108 students of the school, 78 were present on the day, together with 11 members of the teaching staff. Only 4 students and one teacher survived.

Of those at the Okawa school who survived, we have heard stories of the sheer luck of children who clambered up the hill quickly enough to escape, or even got caught by a passing refrigerator which protected them from the wrath of the water.

The wider Ishinomaki City area was no stranger to loss and devastation that day. In the tsunami that followed the earthquake, entire areas were completely leveled by the force of the water.

This city saw the highest death toll in a single municipal area on that day. Out of the population of roughly 160,000, over 3,400 were found dead, and approximately 400 are still missing to this day.

Searching for the Remains of Life

It was in the chaos of the tsunami’s devastation, with no electricity, no water, no telephone service, and roads damaged or flooded, that Suzuki went to look for his daughter, Mai, two days later on March 13.

“On that day, I saw a deserted landscape. It was very quiet. There was no way to get to us, so nobody had come to help. But you could already see the bodies dotted around,” he said as he described the scene to us.

Then he recalled the painful moment when he found his daughter:

“We were searching with our hands, because we didn’t want to risk injuring the bodies of our children in the process. We looked near the hill, and we found a group of 34 kids all together. The force of the tsunami had pushed them into the side of the hill…There, I found Mai.”

‘Our School is Different’

When we visited Okawa Elementary School in February 2021, there was sun above and blue water in the nearby river. The remains of the school, with some walls destroyed and columns toppled over, stood as the only building in sight.

Where a small town once was, now the area next to the river, a mere meter over the sea level, is considered too unsafe to live in. Only some greenhouses occupy the river bank.

The school itself is a striking multi-floor L-shape structure, which meshes harmoniously with the surrounding hills and river nearby. There are pictures which portray cherry blossom trees in front of the building, and a swimming pool at the back.

Suzuki tells us that many of the kids loved their school. “When the kids who survived moved to other schools, they apparently asked ‘why is it that all other schools are square?’ Ours had a curve, it was different.”

And there is a tragic irony in that as events unfolded that day, Okawa Elementary School really did turn out to be different from other schools.

Importance of Planning, Drilling and Logic

In the whole of the Tohoku area, more than 15,000 bodies were found. The whereabouts of another 2,000, however, are still unknown.

According to the data, schools in Japan are a pretty safe place to be during a natural calamity. They have detailed protocols about where to evacuate in case of an earthquake, and if necessary, tsunami. But this wasn’t the case with children in Okawa School.

Suzuki explained how although in name the school had made a manual for tsunami preparedness, it didn’t define a proper evacuation location in case of a tsunami. “Here there was no proper manual. There should be something you can follow without having to think about it.”

He reinforced his point: “Even with the manual, it should be a question not of just saying ‘oh yes we did the manual,’ but training people so that what’s in the manual gets implemented.”

Therefore, when it came to it, the teachers’ behavior defied common sense of heading for a perfectly accessible area on the hill nearby.

“Children used to go there to cultivate shiitake mushrooms. There are pictures proving it,” Suzuki pointed out.

Just next to the shiitake mushroom patch, there is also a cement area on the side of the hill, at a height of an estimated 15 meters, about double the height of the tsunami wave which hit the school.

One of the most upsetting details is the time lag between the earthquake and the tsunami.

Two clocks were found on the scene, and both had stopped at exactly 3.37 P.M. This means that a full 51 minutes passed with children standing in the cold as the adults panicked.

“The problem was that in case people had to think about what to do… The fact that there was a safe platform nearby, so accessible, and they didn’t go there. It makes me bitter to this day.”

Suzuki is not the only one whose outrage is palpable, even 10 years after the disaster.

Although Suzuki wasn’t among them, the events of the day led parents of 23 children to eventually file a lawsuit in 2016 against the school and the local Board of Education, for failing to protect their children on March 11. In 2019, the court awarded 1.43 billion JPY (13 million USD) in compensation to the families, amounting to roughly 600,000 USD per family.

When asked why he didn’t participate in the lawsuit, Suzuki explained that he was adamant that dialogue with people was important.

“What people are often taught in Japan is that you should go to a safe place, protect your life. But I don’t think that brings the message home. Especially when children come on the tours, I tell them: If an earthquake comes, you need to escape, you need to run. If you don’t run, you will die.” He smiles a little: “That normally makes them jump.”

In addition, Suzuki pointed out that it’s important to stay vigilant, because an established evacuation site might no longer be safe. Or worse, a tsunami might have come, but more waves might come later.

On March 11, 2011, eight tsunami waves hit the coast of Japan. The first one which hit the school came from the river, but after that came several from the sea.

But of course, it’s just as important to educate people about what happened. Suzuki has been a vocal advocate for maintaining the school as it was, to remind people of what is at stake.

He is also the co-chair of the Okawa Elementary School Densho no Kai, an association of parents who lost their children. Currently seven parents dedicate their free time to sharing their story, and Suzuki has been a member since 2016.

In a regular year, the organization welcomes 15,000 visitors, from school trips to individuals who want to learn more about the disaster. An exhibition area with pictures from the day is also set to open its doors in May 2021.

Keeping the Memory Alive With the Olympic Flame

Suzuki talked warmly about his daughter. “She really liked basketball, and I was the coach. Mai practiced hard, so she was really good.”

As any father would, he also worried though, and as he walked me to the memorial of his daughter he asked: “I wonder sometimes whether she didn’t like me being her coach, perhaps for a girl it might be the case.”

Noriyuki Suzuki told us how he decided to run in the Olympic Torch Relay, which in June will come by Ishinomaki City, to bring awareness about the school.

“I wanted the torch relay to pass next to the school. The torch relay in the end passes through Ishinomaki city, so I decided I would sign up. But I will not be running alone, I want to run together with my daughter, Mai, as if she were by my side.”

Even after the relay, Suzuki pledged to continue sharing his story for as long as he can, so that as many people as possible will know what happened at Okawa Elementary School. Lest we forget.