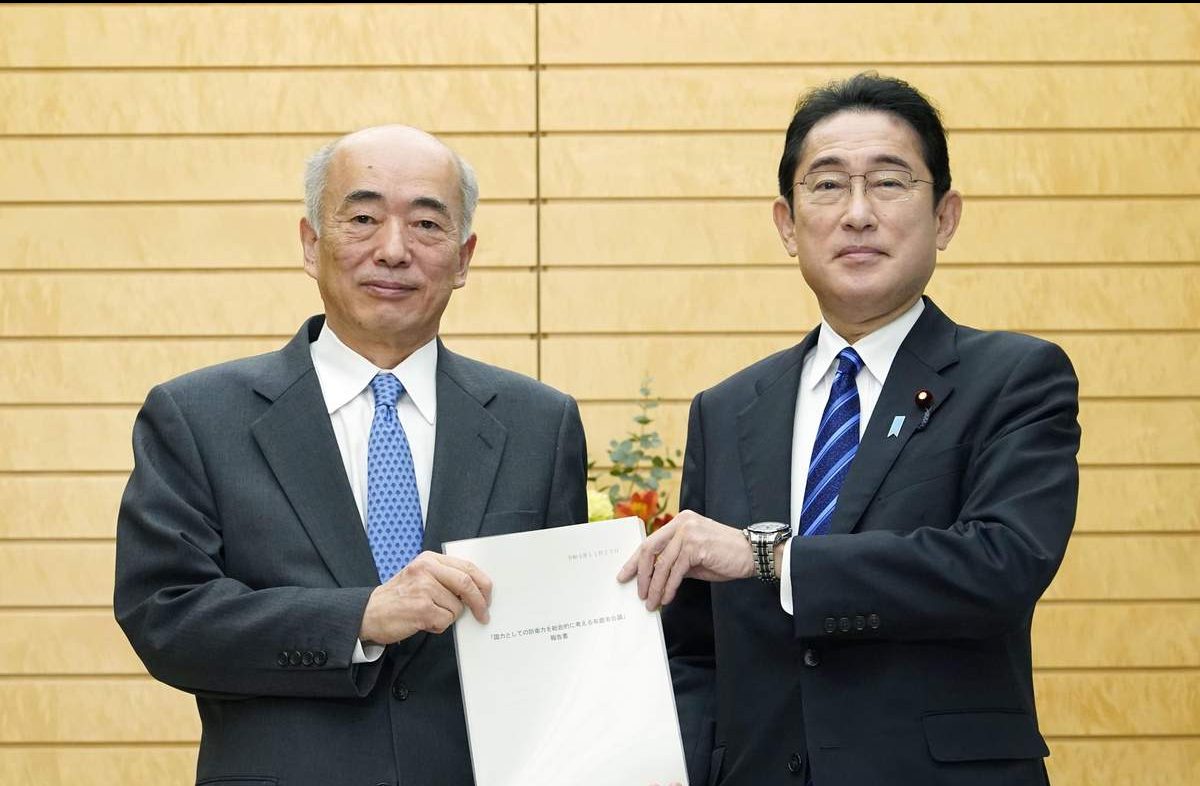 Prime Minister Kishida receives a report from Kenichiro Sasae, chairman of the Advisory Panel on Defense Strengthening, at the PM's office on November 22. The NSS was ultimately decided by the Kishida government on December 16, 2022. (© Sankei)

The Japanese Government revised the National Security Strategy in December 2022. Under the guidance of the new strategy, the National Defense Strategy and the Defense Buildup Program were also formulated.

The National Security Strategy of Japan depicts China as "the greatest strategic challenge." It is a recognition that aligns with the United States' National Security Strategy released two months earlier by the Biden Administration. Japan and the US acknowledge that China is the most serious threat to the stability of the international order in the Indo-Pacific region, even after the Russian invasion of Ukraine.

The first National Security Strategy of Japan was enshrined nine years ago. Japanese security and foreign policy had been acquiescent without such a navigational tool. This became problematic amid tensions intensified by the rise of China and the nuclear weapons program of North Korea. The launch of the National Security Strategy in December 2013 was, therefore, an undoubted legacy of then-Prime Minister Shinzo Abe.

Another critical component of the strategy is its incorporation of counterstrike capabilities. As a sovereign state, possession of counterstrike capabilities is a fully legitimate exercise of Japan's rights based on international law. However, Tokyo had maintained a policy of self-restraint for decades. The new strategy partially abandons a policy that had been insulated from the international standard.

China has been increasingly building up its missile capabilities. Because the US had been a signed party of the Intermediate-Range Nuclear Forces Treaty until President Donald Trump withdrew, the United States has been far behind China in terms of tactical medium range missiles. Japan's option of possessing counterstrike capabilities aims to achieve parity between the Japan-US alliance and China regarding this missile capability.

Deterring China’s assertive military expansion is the goal of the Japan-US alliance. Toward that end, the next option could be the deployment of US military missiles on the Japanese archipelago.

Tokyo's National Security Strategy introduced several new words and concepts. "Like-minded country," which appeared once in the 2013 version, is conceptualized while it reflects the ongoing policy advancement.

The Japan-US alliance is unquestionably a cornerstone of Japanese diplomacy. While China is rapidly expanding its military power without transparency, Japan's goal is one of further cooperation with allies and partners based on shared values.

The National Defense Strategy (NSS) expressly names Australia, India, the United Kingdom, France, Germany, Italy, and other nations as "like-minded countries." In this light, Japan, the UK, and Italy are also collaborating to build a sixth-generation fighter jet.

As it was launched, the public debate became over focused on financial resources. Instead of considering what is required to boost the Self-Defense Forces' military posture under the new NSS, critics focused on where funds would be taken from.

In Tokyo, especially left-sided media opposed the recent security policy development. In response, Yoshihisa Komori, a prominent Japanese journalist on international affairs, criticized Asahi Shimbun's position just after the NSS was publicized. Besides, China, North Korea, and Russia announced a predictably negative attitude toward the brand-new NSS, which seemed to resonate with the internal antipathetic voices in Japan.

However, the majority of public opinion has supported the direction of the security policy. According to a survey by the Yomiuri Shimbun in September 2022, 71% of the public were for the enhancement of Japan's national defense capabilities. This compared to only 24% who said they were against improving Japan's defense posture.

Issues Not Resolved by the National Security Strategy

There are some Japanese self-defense issues left untouched even under the new strategy. After the Russian invasion of Ukraine, Shinzo Abe initiated a discussion on the notion of nuclear sharing. In the aftermath of Abe's assassination, the driving force has been lost for debating this strategic concept.

Prime Minister Fumio Kishida, who hails from Hiroshima ー ground zero of the atomic bombing ー sympathizes with the movement for abolishing nuclear weapons. He will hold the 2023 G7 summit in his hometown to advocate denuclearization.

On the other hand, the China Military Power Report, an annual report of the US Defense Department, states that China "will likely field a stockpile of about 1500 [nuclear] warheads by its 2035 timeline."

Kishida is visiting Washington DC in early January and will meet US President Joe Biden on January 13. At the incoming summit meeting, two leaders will review the burden sharing of the bilateral alliance. Under the traditional Japan-US alliance framework, Japan would act as a "shield" and the US would take the role of a "spear" in the event of a contingency.

Applying the concepts of the new strategic documents, Japan will utilize its new counterstrike capabilities. That means Japan will serve as a spear of the alliance as well.

In sum, Japan has reaffirmed its commitment to the stability of the region by adopting the new National Security Strategy.