EDITORIAL | Japan's Efforts in Diplomacy Must Be Redoubled in 2023 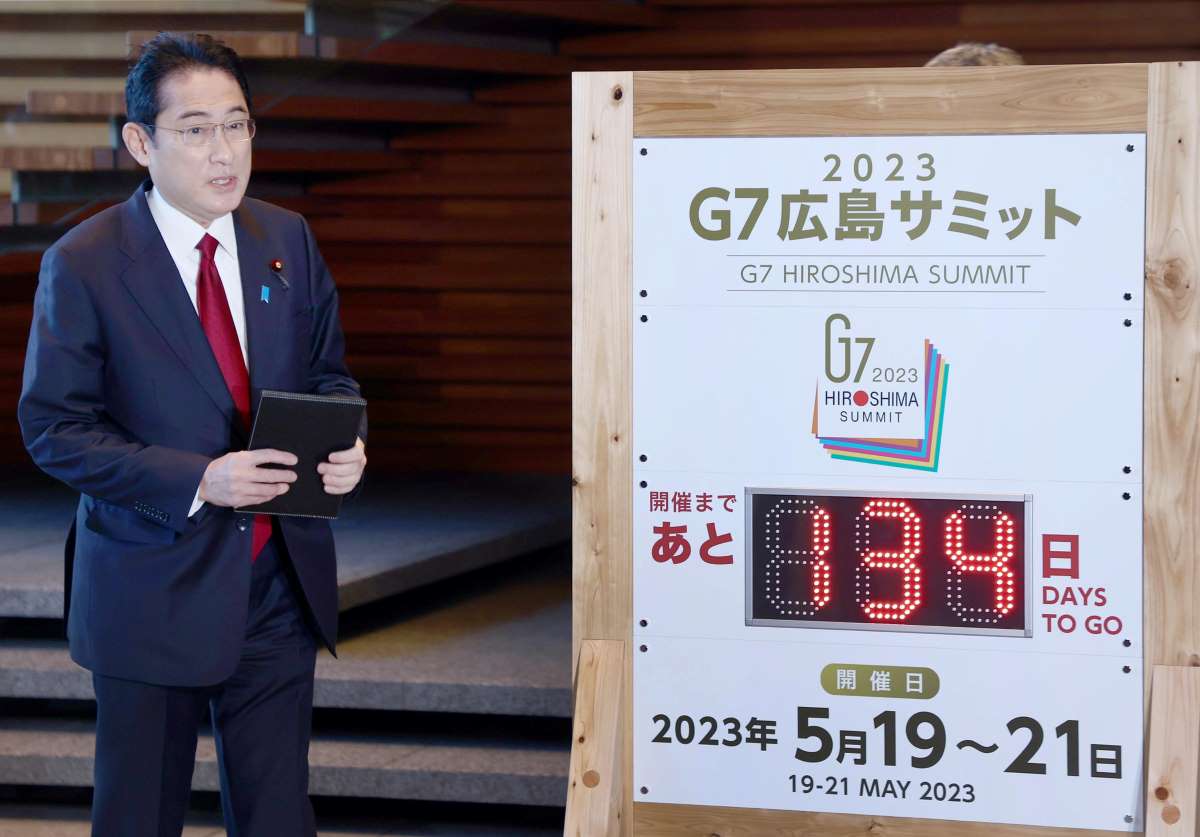 PM Fumio Kishida delivers a greeting at the G7 Hiroshima Summit countdown board lighting ceremony at the Prime Minister's Office on the morning of January 5 (© Sankei by Yasuhiro Yajima).

Japan's time has come for proactive diplomacy. Tokyo must be more active in 2023 in order to raise its standing in the international community.

In 2023 Japan is set to chair the G7 Summit. It is also elected to serve as a non-permanent member of the United Nations Security Council.

At the same time, the Russian invasion of Ukraine continues unabated. Meanwhile, China remains determined to annex Taiwan. Then there is Pyongyang's constant upgrading of North Korea's nuclear and missile capabilities.

Clearly, this is a year in which Japan needs to redouble its diplomatic efforts for the sake of global peace and stability.

On January 6 Prime Minister Fumio Kishida held a telephone meeting with Ukrainian President Volodymyr Zelenskyy. In reply to Zelenskyy's invitation for him to visit Ukraine, Kishida merely said that he would consider doing so while "taking into account various factors."

Kishida should make the trip as soon as possible. And he should assure President Zelenskyy in person of Japan's continuing intention to vigorously support Ukraine.

New Year's Trip to Europe and the United States

From January 9 Kishida will be embarking on an overseas trip that will take him to France, Italy, Great Britain, Canada, and the United States. He is scheduled to meet with US President Joe Biden at the White House on January 13.

Besides the Russian aggression against Ukraine, Kishida and Biden will discuss a coordinated response to China's attempts "to change the status quo through force." That includes Beijing's ongoing threat to annex Taiwan.

North Korea's nuclear weapons and missile activities are among the topics they will address. In addition, the agenda will include the issue of North Korea's abductions of Japanese citizens.

Surrounded by three nuclear-armed dictatorships in China, North Korea, and Russia, Japan finds itself in the most hostile security environment in the world, apart from Ukraine, which is now fighting for its very survival against Russia.

We hope Kishida will emphasize to President Biden in person Japan's commitment to drastically strengthen its defense capabilities. He must do so to convey to the world the full strength of the Japan-US alliance. This is essential for the sake of peace and stability not only in Japan, but also in the region and the world.

Preparing for Diplomacy in Hiroshima

The Prime Minister's upcoming diplomatic swing is also meant to lay the groundwork for the G7 summit. This year it will be held in Hiroshima in May.

There are public opinion polls indicating that "Ukraine fatigue" has set in to a certain degree in the United States and European countries. Nevertheless, we must not allow Russia to take advantage of divisions in opinion. Prime Minister Kishida should assume a leading role in further tightening sanctions against Russia and increasing support for Ukraine.

Leading the Way to UN Reform

For the first time in six years, Japan is a non-permanent member of the Security Council. The term is for two years.

It is a perilous time for the world body. Although a permanent member of the Security Council, Russia is flagrantly disregarding the UN Charter as it continues its invasion.

In fact, the Security Council has become dysfunctional regarding issues surrounding Russia and North Korea. In the UN General Assembly as well, there is a significant number of developing countries that have refused to support resolutions condemning Russia.

Japan should champion reform of the Security Council. Japan must make greater efforts in its diplomacy by reaching out to many developing countries. It must help influence international public opinion so that Russia's aggression will not be tolerated.