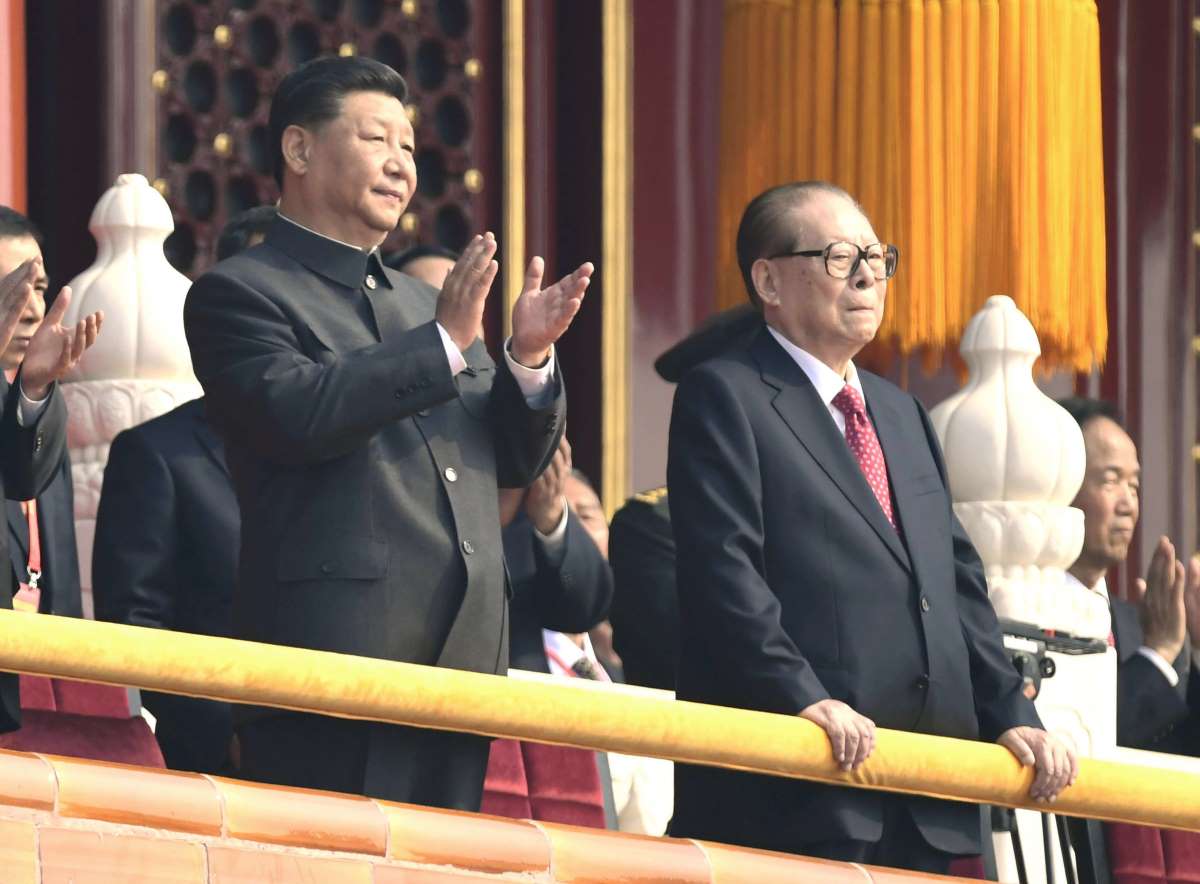 Jiang Zemin stands next to Xi Jinping at a ceremony marking the 70th anniversary of China's founding in October 2019. (©Kyodo)

Jiang Zemin, former general secretary of the Chinese Communist Party (CCP), led his nation for a decade. He passed away at 96 on November 30 in Shanghai, according to reports from China's official news agency Xinhua and other media outlets.

Jiang took over the helm in China in 1989 in the immediate aftermath of the Tiananmen Massacre. During his time in office, he championed the growth of the "socialist market economy." After retirement, he headed the "Shanghai Clique" faction within the CCP that helped launch the current Xi Jinping regime.

He is also known as the man who started the "history war" between China and Japan. Jiang delighted in using the historical issues card to gain diplomatic leverage over Tokyo. Undeniably, the impact of that strategy has left its mark on current Japan-China relations.

It was in the wake of the Tiananmen bloodbath of June 4, 1989, which saw many young people killed, that Jiang was chosen to lead China by CCP elders. After Western countries hit China with heavy economic sanctions for the carnage, Beijing found itself in diplomatic isolation.

But that didn't last for long. Japan quickly broke ranks and lifted its sanctions on China. Then-prime minister Toshiki Kaifu even became the first leader in the West to hold a summit meeting with his Chinese counterpart following Tiananmen, when he visited China in August 1991. A state visit to China by the Heisei Emperor Akihito and Empress Michiko (now emperor and empress emeritus) quickly followed in October 1992. Thus, Japan played a pivotal role in allowing China to return to the international community.

Nonetheless, Jiang took advantage of "anti-Japan" sentiment to regain the CCP's popularity after the Tiananmen protests. As part of his "patriotic education movement," the Chinese government established several museums throughout China to commemorate the Second Sino-Japanese War.

In November 1998, Jiang visited Japan to mark the 20th anniversary of the peace and friendship treaty between the two countries. He attended an evening banquet in the imperial palace dressed in a black "Mao suit," and in his speech castigated Japan, saying, "We must continue to draw lessons from our tragic history forever."

According to The Selected Writings of Jiang Zemin, which contains this speech, during an August 1998 meeting with top Chinese Foreign Ministry officials, Jiang said: "The Japanese militarists were extremely savage. China suffered 35 million casualties [during the war]."

Jiang went on to say, "We must keep mentioning the historical issues to Japan forever."

On August 15, 1995, then-prime minister Tomiichi Murayama, when marking the 50th anniversary of the end of World War II, issued a statement that included the expressions "colonial rule" and "aggression" in referring to Japan's past actions. He also mentioned "deep remorse" and "heartfelt apology."

Nevertheless, in a speech delivered a mere three months after Murayama's statement was released, Jiang declared, "Japan must seriously learn from the lessons of history and deeply repent for its sins of aggression in order to gain the understanding and trust of the peoples of Asia and the world." He refused to bring an end to the historical issue.

In 2015, an expert panel established by the cabinet of then-prime minister Shinzo Abe, issued a report titled "Report of the Advisory Panel on the History of the 20th Century and on Japan's Role and the World Order in the 21st Century."

Regarding the Murayama statement, it said: "After the Tiananmen Square incident, Japan moved to forestall China's isolation in the international community and announced the Murayama Statement on the 50th anniversary of the end of the war. Nonetheless, these efforts on the Japanese side happened to overlap the years of Jiang Zemin, when China enhanced its patriotic education as a means of reinforcing the legitimacy of the Communist Party after the Cold War."