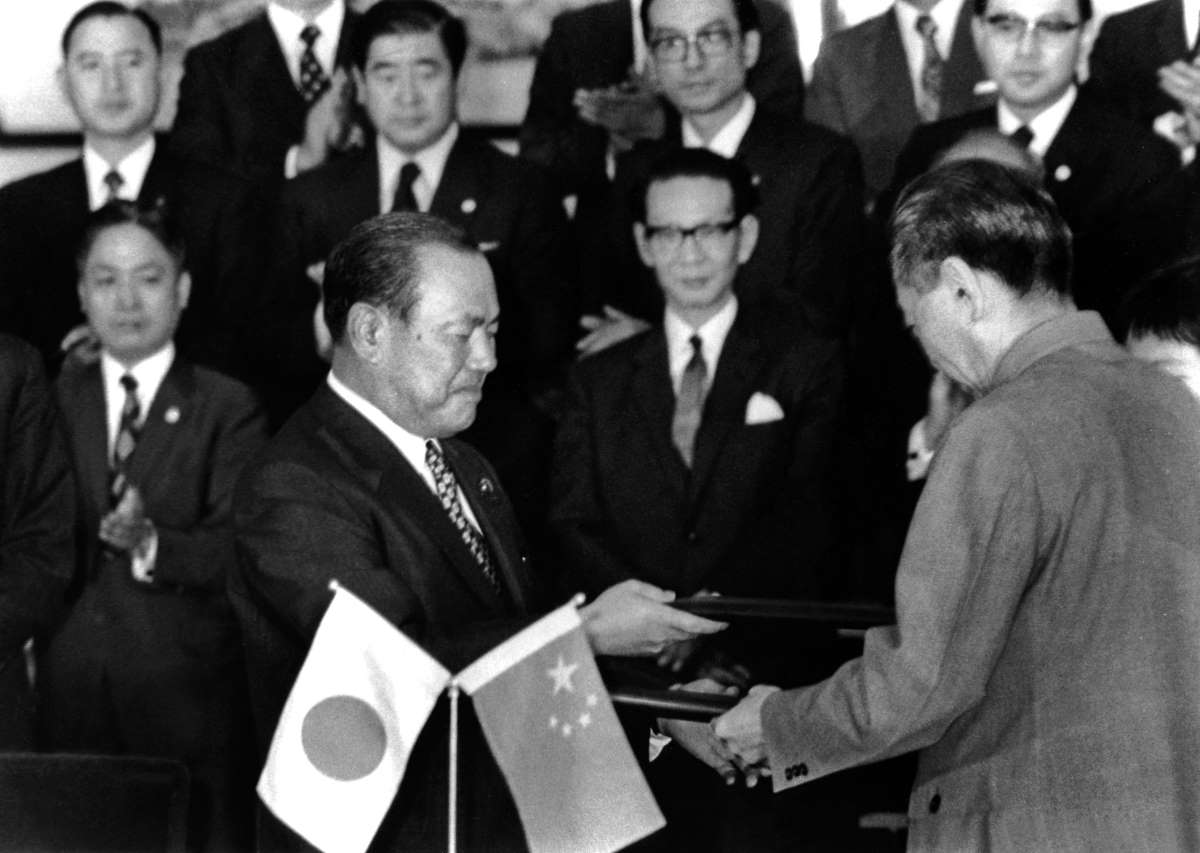 September 29 marked the 50th anniversary of the normalization of relations between Japan and the People’s Republic of China.

The super-heated atmosphere of wildly enthusiastic bilateral friendship that characterized the early honeymoon period has long since chilled.

The most important reason for the cooling of the relationship is the hegemonic behavior that the government in Beijing can no longer disguise. As China’s status has evolved from that of a developing country to its current position as the second largest economy in the world, it has engaged in feverish development of its military power.

The time has come for Japan to reappraise its relationship with its behemoth neighbor. This is a new era in which the preservation of peace for Japan itself, as well as in East Asia and the Indo-Pacific region, requires that we work to contain China.

That means not only strengthening Japan's national defense posture, but also taking other necessary measures to deter China in regards to the economy and academia.

At the height of the Cold War, Japan and China decided to rectify the then-existing situation in which the two neighbors did not have diplomatic ties. The compelling factor behind the rapprochement was the looming threat they shared from the Soviet Union. That strategic objective was not mistaken.

However, Japan’s desire to heal the wounds left by past historical conflicts and establish amicable relations with a stable China has proved an unrealistic fantasy.

For a long period of time, Japan provided generous support for the economic development of China. Nevertheless, the communist regime in China dropped all efforts to disguise its aggressive nature as it strengthened its national power, even willfully using aid from Japan to do so.

Beijing’s wild ambitions are clear in its efforts to seize possession of the Senkaku Islands of Ishigaki City, Okinawa Prefecture, which are an inalienable part of Japan. China Coast Guard vessels engage in frequent naval incursions into Japan’s territorial waters and adjacent seas, seeking to "normalize" their deviant behavior.

Furthermore, Beijing seeks to intimidate Japan, the United States, and other members of the international community that have shown concern over its efforts to change the status quo by annexation of Taiwan, by force if necessary.


Soul-Searching on Support Given to China

Obviously, China should change its hardline stance towards the outside world, along with its suppression of human rights at home. At the same time, Japan needs to do some profound soul-searching about how it has helped raise a great monster that is now threatening peace.

Japan has provided China with approximately ¥3.66 trillion JPY (about $25 billion USD) in official development assistance. Despite willingly receiving that largesse, the Chinese government has rarely acknowledged to the Chinese public that it has received such support from Japan.

Moreover, the Japanese government has gone along with the charade.

China continues to regularly interfere in Japan’s domestic affairs, for example when it criticizes visits by Japanese prime ministers or other officials to Yasukuni Shrine. There have even been some forces in Japan that have parroted that position.

But the lowest point in Japan’s interaction with China came in the wake of the 1989 Tiananmen Square massacre. China was sanctioned by the global community following the crushing of the hopes of students and other Chinese citizens under tank treads as they gathered in the square to demand democratization.

After China had resumed its economic growth without rejecting despotism, it managed to join the World Trade Organization (WTO). Japan, the United States, and other Western countries agreed to its membership.

Nonetheless, despite subsequently reaping many benefits from free trade, Beijing has made no move to change its unfair trade practices.

Mike Pence, who served as vice president of the United States during the Trump administration, made a speech in 2018 in which he noted that previous administrations had hoped to encourage greater freedom in China through things like support for China’s membership in the WTO, but that “that hope has gone unfulfilled.”

He added that, under the Trump administration’s National Security Strategy, the United States had adopted a “new approach to China.” The US government thereby officially turned its back on the engagement policy that American administrations had consistently pursued ever since President Richard Nixon’s trip to China in 1972 set the stage for normalization of diplomatic relations between Washington DC and Beijing.

The Biden administration has continued to adhere to this new approach of seeking to contain Chinese expansionism.


Facing Up to Political Risks

Japan in particular could have attested to the truth of the need for a new approach. The drastic strengthening of Japan’s defense posture now being considered by the government and due to be announced in December assumes peace is contingent on containing China’s ambitions.

Limiting this containment to the realm of defense will be insufficient, as cooperation from the economic sector and academia will also be essential. But Japan has sorely lagged in terms of developing the necessary frame of mind and effective responses. Our nation must now be prepared to assume more risk in standing up to China.

It is unrealistic to expect a total decoupling from the economic giant China that is our neighbor. At the same time, it would be the height of folly to continue to do business with China without viewing things from the standpoint of economic security.

Here is an example of how vulnerable Japan is. In 2010, in the wake of an incident in which an illegally operating Chinese trawler collided with Japan Coast Guard patrol boats near the Senkaku Islands, China halted exports of rare earths to Japan in what amounted to de facto economic sanctions.

China has not changed its strategy of acquiring by devious means the technologies and intellectual property of foreign firms operating in China. It has gone so far as to pass a law requiring foreign firms doing business in China to provide their private information to the Chinese government.

We cannot ignore either the allegations of the massive use of forced labor in Xinjiang, and other human rights abuses in China. If Japanese companies operating in China come to be viewed as contributing to the problem, then they may end up being excluded from Western markets.

From the standpoint of economic security, it is critical that we develop dual-use equipment and technologies. Simultaneously, we must begin preventing their outflow overseas. When viewed in that light, how can we accept the fact that the Science Council of Japan has gone so far as to sign a memorandum of understanding for the promotion of cooperation with its Chinese counterpart, the China Association of Science and Technology, an organization that is committed to the Chinese government’s model of military-civil fusion?

In short, as we mark the 50th anniversary of normalization of relations with China, we need to conduct a wholesale reframing of our relations with that country in order to deal with these issues.

Unless we do so, true Sino-Japanese friendship will remain nothing but a pipe dream.