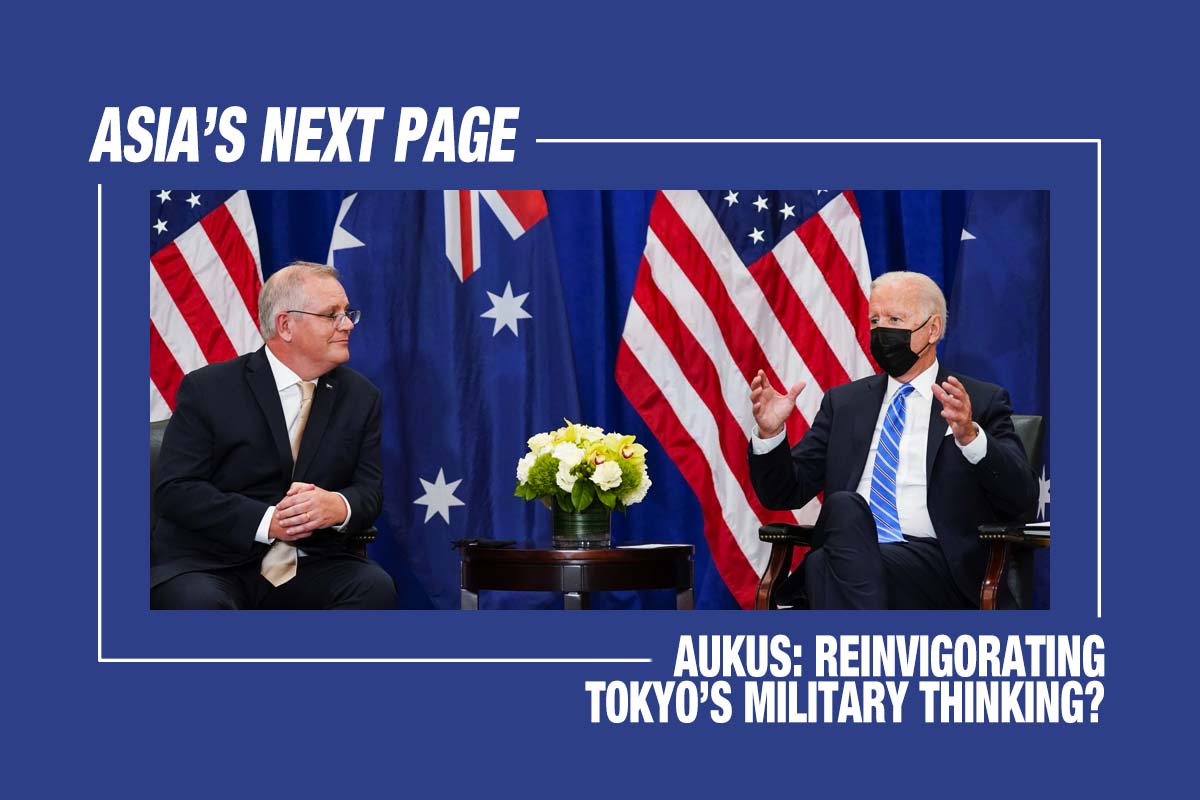 Amid mounting tensions with China, the Indo-Pacific has become a central feature of Japan’s foreign policy, and the Quadrilateral Security Dialogue (Quad) a key grouping to execute its regional agenda. These plans, and the geopolitics of the region at large, were taken by deep surprise with the signing of the Australia-United Kingdom-United States (AUKUS) security partnership on September 15.

It spurred a debate over how the alliance will complement (or contradict) existing groupings like the Quad – particularly considering that Japan and India were not included, consulted or informed about AUKUS by their Quad partners Australia and the United States. For Japan, which is also a security alliance partner of the U.S., such an overture raises more alarms about the realness of Joe Biden’s attempts at revitalizing partnerships to rebuild trust in American leadership.

What is Japan’s stand on AUKUS, and how does it affect Tokyo’s regional defense outlook?

As an “enhanced trilateral security partnership”, AUKUS focuses on the transfer of critically sensitive technology in the nuclear sector. Australia’s nuclear-powered submarine deal under AUKUS led to the cancellation of a $66 billion USD deal to buy French-built conventional submarines, dealing a huge financial blow for the French military industry, while causing a failure of diplomatic trust. It has ultimately highlighted a widening gap between traditional Western allies over their approaches to countering China.

In Japan, too, this development has caused much worry regarding similar behavior by the U.S., particularly towards its commitment to support Japan in the East China Sea (ECS).

Under Japanese Prime Minister Fumio Kishida, who is regarded as a consensus building leader, Japan is only set to further the strides made under former Prime Ministers Shinzo Abe and Yoshihide Suga. This makes Tokyo’s lack of involvement in AUKUS all the more surprising.

Japan’s exclusion from the grouping is particularly startling considering that it is a key U.S. treaty ally, and aligns with all three members on several points – including threat perceptions of China, shared membership of the Group of Seven (G7), and ad-hoc intelligence sharing with the Five Eyes. Through such platforms, Japan has long engaged with the West as a leading Asian power. Its absence from a security-centered Indo-Pacific grouping with some of its closest partners comes as a major gap.

It cast questions over not only whether AUKUS can be reinforced alongside the numerous minilateral ventures in the Indo-Pacific, but also the Quad’s future amid anxiety over American credibility.

Lack of confidence in the U.S. (and even Australia) could be detrimental for the Quad, which is slowly but surely seeking to expand its leadership outlook in the region, as showcased via recent summits. While the distinction drawn remains that AUKUS is a security/military partnership while the Quad a diplomatic dialogue forum, the alliance’s impact on the quadrilateral’s synergy and ties with each other and third countries, like France, could potentially turn over a sour leaf.

Regardless of its exclusion, the official government in Japan (and for that matter, the strategic communities in India) have welcomed AUKUS. However, Japan’s absence from AUKUS does indicate the need for Tokyo to reexamine its domestic defense industry culture and military limitations.

Here, we must take another look at ventures like Five-Eyes. While Japan is considered an unofficial “sixth” eye of the grouping, ultimately it is not an official part of the venture. For a partnership like AUKUS that looks at various national security-driven industrial sectors to succeed, previous deep-seated involvement in intelligence sharing and sensitive defense technology sharing is needed. The AUKUS powers enjoy the same via Five Eyes.

Japan’s limitations due to its post-war constitution and limitations under Article 9 have confined its military security outreach to the U.S. In fact, a key factor hindering Japan’s full membership in the Five Eyes is its insufficient counterintelligence infrastructure, which prevents extensive information sharing for fear of leaks. Ultimately, Japan has yet to enjoy a similar level of confidence in its alliance with the U.S. compared to Australia and the U.K.

However, absence from AUKUS can help Prime Minister Kishida to push forward amendments to Tokyo’s pacifist outlook (a key unachieved part of Abe’s agenda), especially as the public debate in Japan and its national security policy begins to more overtly recognize the threat China poses to the country.

In fact, Japan’s push towards active defense has already begun under the new administration. In an unprecedented move, Tokyo pledged to double defense spending to two percent of its national GDP, underscoring Japan’s haste in acquiring missiles, stealth fighters, drones and other weapons to deter the potential military threats by China and North Korea. And while such an ambitious goal is expected to take time to fulfill given Japan’s debt-saddled finances from the COVID-19 pandemic, the strategic community in Japan does expect Tokyo to abandon its commitment to a military budget within one percent of its GDP.

Another important fact to consider while discussing Japan’s view on the AUKUS is its complicated nuclear policy. For decades, Japan’s nuclear posture has been guided by the “three non-nuclear principles” which act as morally and politically binding norms: no possession, no production, and no permitting the introduction of nuclear weapons into Japanese territory.

This nuclear posture is deeply rooted in history and the memories of the Hiroshima and Nagasaki bombings, and has caused Tokyo to further champion various nonproliferation platforms, like the Non-Proliferation Treaty, the Comprehensive Nuclear-Test-Ban Treaty, and the International Atomic Energy Agency, among others. In essence, Japan has a deep-rooted strategic and moral culture against nuclear weapons, which could very well be a foundational factor for the lack of consideration of Japan’s inclusion in AUKUS.

However, Japan has increasingly and unambiguously relied on the nuclear umbrella provided by the U.S. for its security. Under Prime Minister Kishida, there has been a further injection of a contradictory tone to Japan’s nuclear posture. Notably, Kishida defended his pro-nuclear energy policies during the Liberal Democratic Party’s (LDP) recent leadership race, arguing that restarting nuclear power plants was vital after it was delayed post the 2011 Fukushima disaster.

Further, pro-nuclear lawmakers now hold key positions in the Kishida administration, and could shape a more pro-nuclear national policy, at least in the civilian sector. While institutional challenges are certain to come up, the need to embrace nuclear energy is increasingly part of the energy debate as a pragmatic way to meet Japan’s carbon emission commitments.

Moreover, such a policy shift could offer Japan an opportunity to strengthen its ties with the U.S., U.K. and Australia, while reducing its dependence on Washington as a security provider.

As China presses its claims to territories in the South and East China Seas, Tokyo has already embarked on a strategy to strengthen its partnerships in the Indo-Pacific as a means of better managing China.

Japan has been rapidly bolstering its partnerships with Britain, France and Southeast Asian countries. The strengthening of defense ties between the U.K. and Japan was visible as the British aircraft carrier HMS Queen Elizabeth visited Japanese ports in September for joint exercises. Both sides agreed to accelerate discussions for possible collaboration on Japan’s next-generation FX fighter jet, while British Defense Secretary Ben Wallace and his Japanese counterpart Nobuo Kishi further “confirmed [their] shared position in strongly opposing unilateral attempts using force to change the status quo in the East and South China Seas.”

AUKUS has also highlighted the need to actively build stronger Australia-Japan ties. In the past year, Australia and Japan concluded a defense agreement that will allow their forces to train in each other’s territory to fend off mutual tensions caused by China’s assertive actions. This comes as an important and remarkable development placing Australia in a high position in its defense partnerships, as Japan had previously signed such a deal only with its key ally, the U.S.

However, despite such growing ties, Canberra notably did not turn to Japan for collaboration on submarines, but looked to France – and then replaced Paris via AUKUS with Washington’s nuclear-powered submarines. Simply put, Canberra could have resurrected a deal that was almost signed six years ago with Tokyo to acquire 12 off-the-shelf Japanese Soryu class submarines, concurrently returning the Japanese taxpayers billions of dollars. The fact that Australia chose to anger France –a key maritime power with direct assets in the Indian Ocean –and go to AUKUS without looking at Japan highlights a deeper break in the broader Australia-Japan military nexus.

In terms of Japan-U.S. ties, AUKUS assures Tokyo of Washington’s continued engagement in the region and staunch commitment to deter Chinese aggression. But it also opens the Tokyo-Paris relationship to be leveraged as a key fulcrum of France’s Indo-Pacific strategy. In lieu of the U.S., Japan (and India) can be France’s key partners in the region to assure Paris’s continued engagement is welcomed and fostered.

This will in fact be a test of Prime Minister Kishida’s diplomatic abilities. He must employ his well-honed skills as a seasoned diplomat and use Abe’s diplomatic style of building personal camaraderie between leaders to further Japan’s partnerships with both AUKUS states and European powers.

A Window of Opportunity?

In many ways, AUKUS could prove to be a window of opportunity for Japan, coming as an incentive for Tokyo to double down on strengthening the security structure of democratic, like-minded powers in the Indo-Pacific. Prime Minister Kishida has already, for instance, held telephonic conversations with Quad states since assuming office, notably congratulating Australian Prime Minister Scott Morrison for signing AUKUS. Clearly, Japan hopes to receive AUKUS on a positive note as an opportunity to reinvigorate its bilateral ties, with not only AUKUS states but also other powers like India and France.

Moreover, the inking of AUKUS also comes as a prompt to review Japan’s own defense capabilities. As a security pact aimed at bolstering capabilities, AUKUS can be a crucial deterrence mechanism to Chinese belligerence. It can share the burden of regional security, thereby allowing Japan (and India) to strengthen their own naval capacity and enhance their own contributions to the region.

Dr. Jagannath Panda is a Research Fellow and Centre Coordinator for East Asia at the Manohar Parrikar Institute for Defence Studies and Analyses, New Delhi. He is also the Series Editor for “Routledge Studies on Think Asia”. Dr. Panda is the co-editor of the latest book, Quad Plus and Indo-Pacific: The Changing Profile of International Relations (Routledge: 2021).