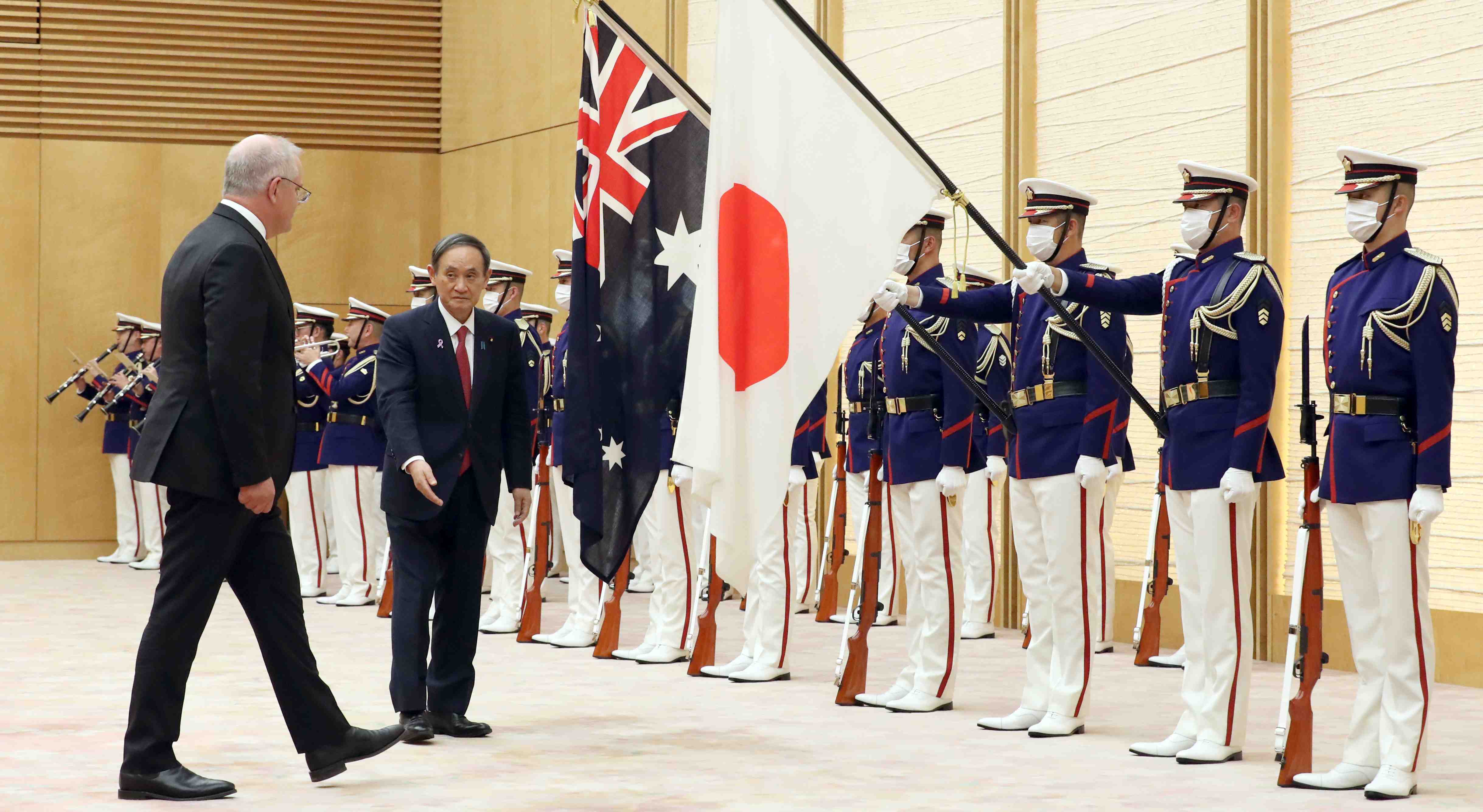 ~To take fullest advantage of Japan’s Reciprocal Access Agreement with Australia and the opportunities it offers, Prime Minister Suga needs to allow the JSDF to up its game considerably.~

The Australian and Japanese prime ministers met in Tokyo on Tuesday, November 17, and discussed trade, energy, environment, and defense matters. But the defense part gets the attention, as both leaders agreed “in principle” on a Reciprocal Access Agreement (RAA).

The RAA makes it easier for each nation’s troops to operate in each other’s country. It’s the first such agreement Japan has signed with a country besides the United States.

One imagines the Australians are wondering why it took six years to reach a deal, while the Japanese are probably congratulating themselves for having done it so fast.

The Japanese and Australian militaries are not total strangers. Japanese troops have been training in Australia since the early 2010s, to include sending ships and troops to the Talisman Sabre exercise. Japanese ships have recently exercised alongside the Australian Navy in the Indian Ocean Malabar Exercise and in the South China Sea.

But Australian units have not trained or been stationed in Japan. The door is now open wider in both directions, in theory.

The important thing with an agreement like this is what both sides make of it.

Japan’s natural inclination is to consider signing an agreement to be progress enough, and thus no need to do much more. That would be unfortunate.

Some of the low-hanging fruit to move things forward? Deploying a RAAF squadron to Japan ー and, vice versa, a Japan Air Self-Defense Force squadron to Australia. Bringing the Australian army and navy to exercise in Japan is also easy. Beside the favorable “optics” of the Japan Self-Defense Forces and Australian Defense Force operating together, the JSDF benefits from deeper exposure to another military and different ways of doing things.

Keep in mind this was all thought impossible a decade ago — or even four years ago, for that matter, after Australia went with a French replacement for its aging submarine force, despite the Japanese thinking the “fix was in” for their submarine.

Why Not Aim Higher?

Consider combining Japanese and Australian amphibious forces as a “joint task force” to master the complex air/sea/ground coordination that is part and parcel of amphibious operations.

Send a Japanese amphibious ship — even an older LST — and a battalion of Japanese “Marines” down to Australia for six months and operate out of Darwin and/or over in Queensland with Australia’s amphibious force. There is plenty of room in northern Australia.

Also, it’s a good way to give Japan’s new Amphibious Rapid Deployment Brigade (ARDB) some real experience outside Japan, in an unfamiliar environment and with foreign forces. That’s how a military professionalizes.

And it’s preferable to canned exercises in Kyushu or Hokkaido — with “commissars” at JSDF headquarters in Ichigaya nearby to keep the training as “safe” (in other words, unrealistic) as possible.

No. It’s good, but for the participants such exercises can become like a piano player who practices only one song. He might play it perfectly, but it is still just one song.

And maybe operate the Australian-Japanese task force up into Southeast Asia or throughout Oceania, with HA/DR training and response as one of its missions.

That would be something indeed, given that is where not long ago the Japanese and Australians were trying to exterminate each other.

Coordination Among Countries with Shared Values

This highlights the political importance of the Suga-Morrison meeting: Two of Asia’s key democracies deepen defense ties ー with the potential for creating real operational capabilities ー and employing them around the region. In other words, China is driving free nations together to defend themselves.

The RAA agreement also belies Beijing’s shrill claims that regional nations dislike Japan because of World War II and fear of a remilitarized Japan. The Australians have as much reason as anyone to hold a grudge, but they’ve long since recognized that today’s Japan isn’t 1930s-1940s Japan. Take away Korea and China, and that’s the feeling throughout most of the Indo-Pacific, if one looks closely.

On cue, Beijing has already complained and warned Japan and Australia will “pay a corresponding price” for the RAA.

Given this, one wonders if PM Suga’s administration might put a brake on attempts to do more with Australia on the military front. Some local observers point out that he is beholden to the LDP’s “China faction.” And others note that, if a Biden administration is “soft” on China, shouldn’t Japan be as well?

A similar dynamic may play out in Australia as Beijing inflicts trade punishment on certain Australian industries ー all in violation of trade agreements the PRC has signed.

The Americans have gotten scant mention so far, but the RAA is good news for them.

For starters, U.S. forces need the help and are overstretched in the region. Also, this breaks down the “hub and spoke” nature of the U.S. presence in the Pacific. That’s a construct that has American forces operating mostly — even if not always — bilaterally with Asia/Pacific nations (i.e., the spokes).

The “spokes” need to operate together — without the Americans driving things. Doing so improves capabilities and also deepens psychological and political ties that come of military-to-military engagements between like-minded nations.

This doesn’t mean the Americans are excluded or unnecessary, but rather it bolsters the U.S. presence as part of a more complex and stronger “web” of defense relationships.

An Australian Army liaison officer is reportedly going to be assigned to the Japan Ground Self-Defense Force. The right officer, doing some pushing and persuading — and with some help from the U.S. Marines and U.S. Navy ー can move things forward more than imagined.

But to take fullest advantage of the RAA and the opportunities it offers, PM Suga needs to allow the JSDF to up its game considerably. Japan’s military still needs more money (for training and personnel), a joint capability (which it doesn’t have), and to meet recruiting targets that it has missed by 25% annually for years.

How bad are things? The Ministry of Defense can’t find 500 MSDF sailors to crew two new Aegis destroyers they are contemplating building. So they are thinking about “press-ganging” 500 GSDF (Japanese Army) troops to join the Navy.

The glow of the Suga-Morrison meeting will wear off before long. Now comes the hard part of making something of it.