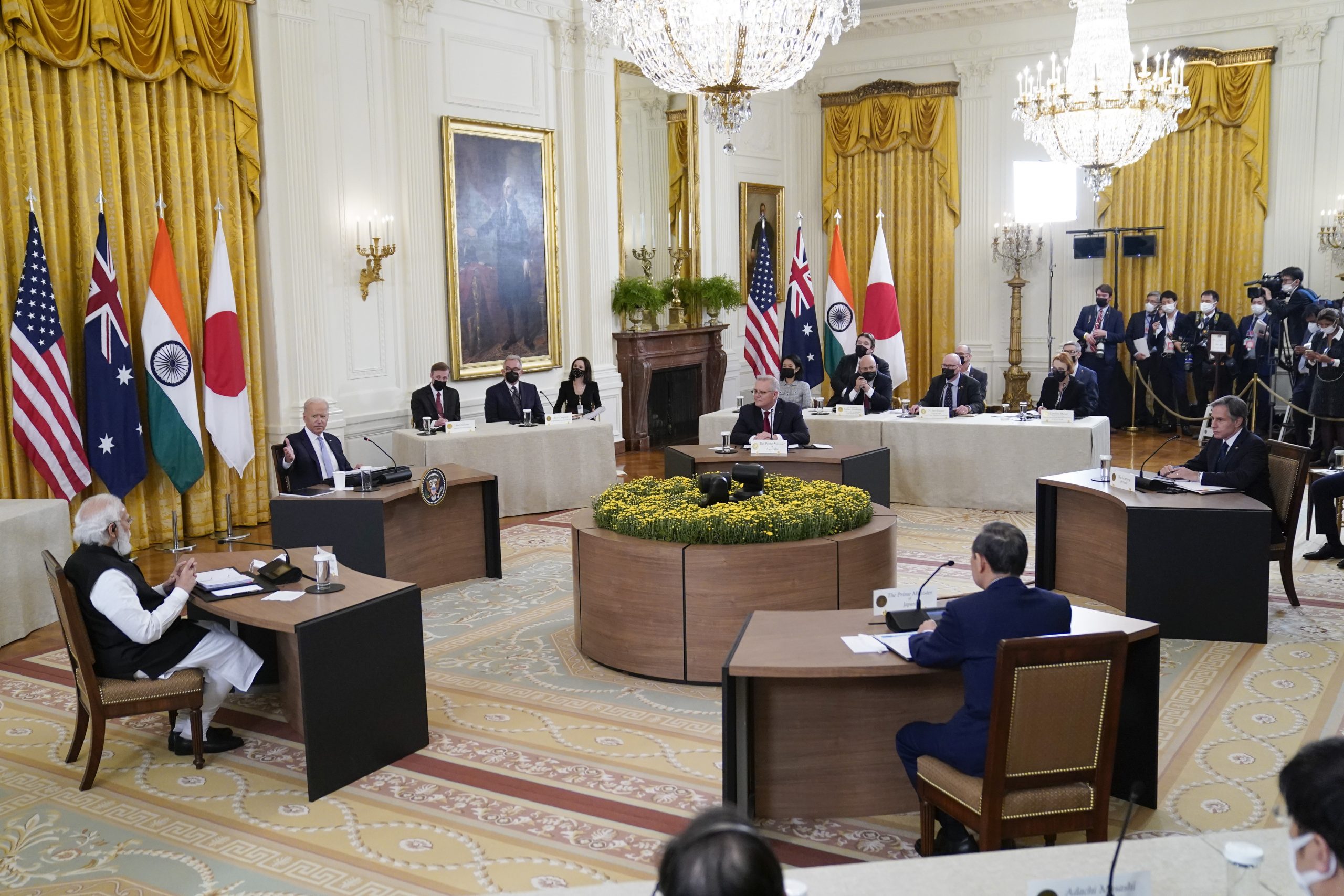 Restarted at the ministerial level during the Trump administration in 2017, the Quad has emphasized traditional national security issues in the Indo-Pacific since its origins in 2009. The Quad’s first two leaders summits this year — one virtual and one in-person — have added critical and emerging technology as one of the key issues driving security discussions between the United States, Japan, Australia, and India.

The four heads of state at March’s virtual leaders’ summit announced the creation of critical- and emerging-technology working groups. They also called for cooperation on international standards setting, monitoring trends of critical and emerging technology development, and dialogues on critical technology supply chains.

September’s in-person leaders’ meeting shed light on how the four governments plan to address these issues. It also defined the scope of the important technology-focused working groups.

The Joint Statement from Quad Leaders following the first in-person leaders’ summit in September explicitly identified critical and emerging technologies as one of the world’s “most pressing challenges,” and for good reason.

The risks for the emergence of tech totalitarianism and a larger surveillance state grow along with the expansion of Chinese government-backed firms such as Huawei and ZTE. To counter this, questions about individual liberty, national security, and societal implications of technology in 5G deployment, artificial intelligence (AI), and quantum information science (QIS) should play a large role in shaping the Quad’s discussions on critical and emerging technologies.

To their credit, the United States, Japan, and Australia have banned the use of Huawei in their 5G networks. India has not explicitly banned Huawei and ZTE as 5G suppliers, but left them out of their national 5G trials.

The Quad is playing a leading role in working towards clean, secure, and reliable next-generation networks. The members have emphasized this by recognizing the importance of private-public partnerships in the process.

The Leaders’ Statement builds on what each nation has already done. In conjunction with industry, it calls for advancing deployment of open 5G, post 5G (6G and beyond) technologies. Going further, it commands coordination on Open-RAN, which seeks to create a diverse, interoperable, and lower-cost 5G network without the security risks from companies like Huawei.

To help get there, the Quad established a Track 1.5 industry dialogue on Open-RAN deployment, gathering industry and government representatives to discuss Open RAN adoption, 5G diversification, and network security.

Technological standards setting regarding 5G and next-generation technologies will be a key barometer of whether or not the Quad is effective in shaping the global technological environment — and ensuring totalitarian tech does not dominate the next generation of standards.

The Quad Principles on Technology Design, Development, Governance, and Use adopted by the four nations say they will work together on developing new technical standards on communications and AI. But some of the most important work the group can do to shape the next generation of technology standards is through international bodies like the United Nations-operated International Telecommunications Union (ITU).

The Leaders’ Statement acknowledges the importance of the ITU as a multilateral standardization organization, and says the four nations will work to coordinate and cooperate in organizations such as this. But it may downplay the significance of the ITU in ensuring rules-based and democratic principles guide the next generation of technological standards.

In what is shaping up to be a contested race for the next secretary general and other down-ballot races at the 2022 ITU, the Quad will need to build a large coalition to ensure their preferred candidate wins important leadership elections and sets standards for the future.

It is competing against China, which has said its goals are to set worldwide technology standards by 2035. Without having influence over standards bodies, Chinese tech firms could dominate the standards for technology development for years to come, cutting out other country’s domestic industries and causing national security vulnerabilities across the supply chain.

In Washington, the leaders also defined resilient, diverse, and secure technology supply chains across hardware, software, and services as part of their shared national interest. Simultaneously, they called for cooperation on supply chains and supporting technology development.

Working together on these key areas could support foreign investment across the group, and supplement onshoring of specific national security-sensitive production to build resilience to outside shocks similar to those seen during the coronavirus pandemic. This would provide opportunities for other nations, such as Taiwan, to engage the Quad in a meaningful way, and open the door for further cooperation on important supply resiliency inputs, such as critical minerals production.

Developing these secure supply chains is crucial, given the real national security threat posed by certain foreign components and the economic impact of hundreds of billions of dollars of intellectual property theft by China and other actors across the economy.

Quad leaders will need to vigorously protect intellectual property and punish those who steal it. They must also find a robust way of protecting data flow in the technology working groups to protect both national security and economic concerns in all four countries.

The recent announcement of a new technology sharing deal between Australia, the United Kingdom, and the U.S. (AUKUS) shows there are additional opportunities to cooperate on critical and emerging technology outside of just the Quad. That deal includes the acquisition of nuclear-powered submarines, along with cooperation on AI, cyber, and QIS issues.

The already robust U.S.-Japan science and technology relationship offers several forums in which Washington and Tokyo can work together bilaterally — and also advance the Quad’s shared objectives.

Since first signing an agreement on International Cooperation on Science and Technology in 1988, U.S. and Japanese science and technology (S&T) leaders have met at the ministerial level 14 times to discuss policy coordination and policy priorities. U.S. and Japanese officials have not held a Joint High-Level Committee (JHLC) meeting since 2019 despite having met at the working level in June to discuss issues such as AI, QIS, and clean energy technology.

Reconvening this group with more of a national security focus could help the U.S. and Japan augment the Quad’s multilateral approach through robust bilateral coordination on emerging tech issues.

Other high-level working groups on space-based technology and quantum information science cooperation can also play a role in this policy development. But another meeting of the JHLC will be important to advance shared technology priorities to the leader-level.

As Japan unveiled its 6th Science, Technology, and Innovation Basic Plan earlier in 2021, the government also launched the new Digital Agency this September to address digitization issues. Their examination ensures heightened attention will remain on critical and emerging technology issues in Japan, both from a national security and a societal lens.

The Quad has identified several important critical and emerging technology spaces in which multilateral coordination will be necessary to ensure the success of like minded nations across the Indo-Pacific. Now it is up to policymakers in Washington, Tokyo, Canberra, and Delhi to deliver tangible results for the future on critical issues, including standards setting, 5G, AI, QIS, and the role of technology in free societies.