[Asia’s Next Page] Saving Sri Lanka: Can India and Japan Lead the Way? 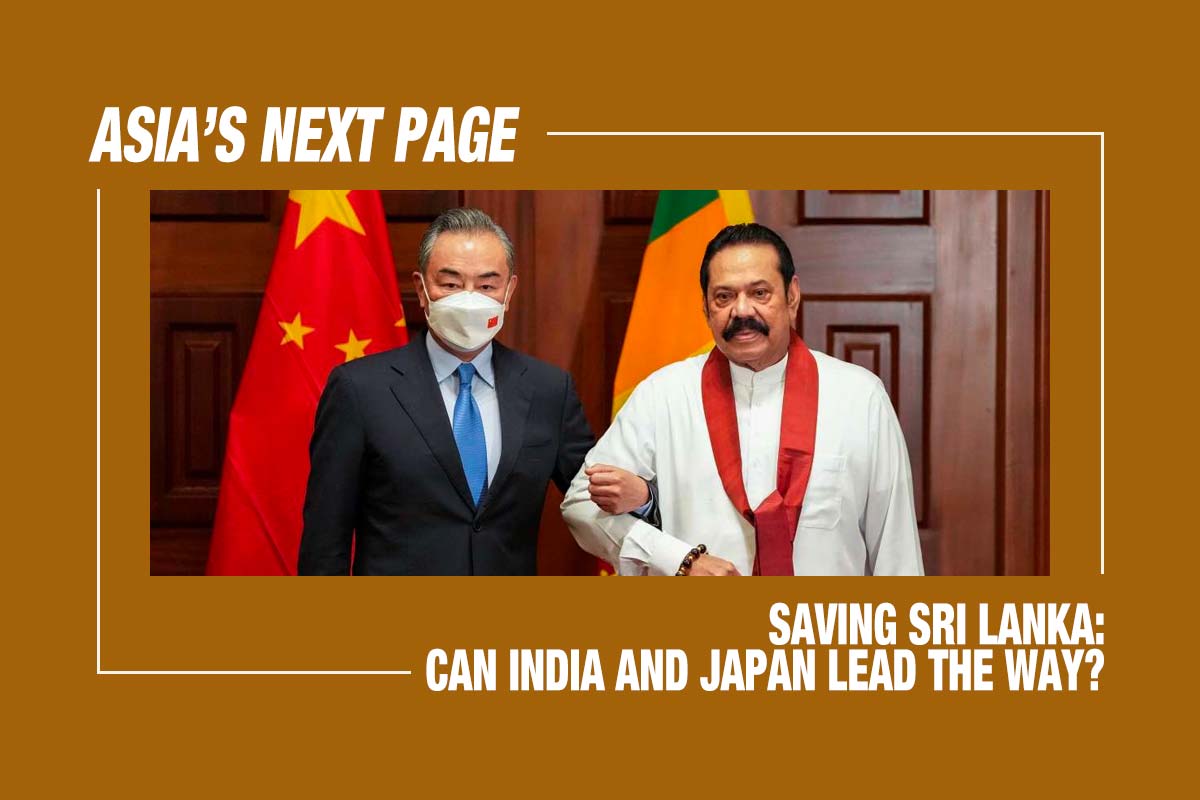 On September 1, under the new President Ranil Wickremesinghe, crisis-plagued Sri Lanka reached a staff-level agreement with the International Monetary Fund (IMF) for a $2.9 billion USD bailout package over 48 months. This was incumbent upon certain conditions such as “financial assurances” from official creditors (referring to debt relief measures) and additional financing in order to stabilize the Sri Lankan economy in the short term and promote sustainable, inclusive growth in the future.

Soon after, Japanese Finance Minister Shunichi Suzuki urged China and India, among other creditors, to discuss a plan of action for Sri Lanka’s debt restructuring.

Though China – whose lending tactics are partly being blamed among several quarters for “prolonging countries’ debt agony rather than fixing  it” – has already talked about its open intent to work with “relevant” countries for aiding the ailing island, it has not shown much interest in shouldering any responsibility.

However, China’s plan to work with other creditors on debt relief in Zambia is a ray of hope for Sri Lanka.

On the other hand, India and Japan have been intensely invested in the aid process, and in the coming months they will likely strategize about improving the destabilizing economic and political situation in Sri Lanka.

Can India and Japan utilize their combined strengths, deep camaraderie, and longstanding working relationship to help Sri Lanka tide over the present crisis?

How far will their constructive attempts be expected to check, if not contain, China’s growing influence and secure their national interests in the Indian Ocean region (IOR)?

Sri Lanka’s strategic location at the crossroads of major shipping routes makes it a sought-after country in the Indo-Pacific geopolitical jostling between regional and global powers, particularly for controlling access to major sea lines of communication in the Indian Ocean. Hence, states like China, India, Japan, the European Union (EU), and the US have been clamoring for influence in the island country to secure their respective national interests.

India has been the traditional security provider, during 2005-2015, under the Mahinda Rajapaksa presidency and then again post 2019 under Gotabaya Rajapaksa. However, Sri Lanka tilted to China significantly, which was of concern to India, Japan, and the United States.

The nepotistic and corruption-plagued Rajapaksa family regime – in 2020, Gotabaya’s older brother was prime minister and two more close family members held cabinet positions – was notorious for its close links to China. Beijing had provided economic and military support during the Sri Lankan civil war and subsequently gained an enormous foothold.

However, the unprecedented post-pandemic economic freefall in Sri Lanka that resulted in an unsettling political and humanitarian crisis is largely a result of years-long gross mismanagement by successive governments. For years, Sri Lanka was plagued by the “twin deficit” (fiscal plus current account) problem, compounded by high levels of foreign debt, high inflation, endemic corruption, and COVID-19 stagnation.


Japan and India After the April Default

Consequently, in April 2022, Sri Lanka preemptively defaulted on all its foreign debt totaling $51 billion USD, with international commercial entities comprising the largest share of the debt (36%).

Even as short-term, high-interest Chinese loans are said to have hastened Sri Lanka’s problems, China officially accounts for only about 10% of the total debt. However, certain estimates peg the amount held by Chinese entities overall – including commercial lending to the government and loans to Sri Lankan state-owned enterprises – to be about 20% at the end of 2021.

In contrast, the share of outstanding loans for India and Japan are 2% and 9%. Yet, it is the latter two that have taken the lead in setting up humanitarian and rebuilding efforts: Japan provided emergency grant aid of $3 million USD for Sri Lanka, and India has been a principal source of help providing about $4 billion USD in loans, currency swaps, and humanitarian assistance.

Besides aid, India is also working on a long-term multi-sectoral approach toward deepening economic cooperation, such as development of the Trincomalee Port, a fisheries harbor, connectivity, and power projects.


China After the Default

On the other hand, China has been non-committal to Sri Lankan calls for help, announcing emergency humanitarian assistance of only about $74 million USD. Chinese state media has in turn blamed Western commercial creditors and multilateral institutions, which have the largest stakes, for precipitating this debt crisis. Beijing has asked the IMF and World Bank to address the situation by coordinating with all relevant parties.

Beijing’s inadequate measures are in all likelihood an attempt at not setting a precedent for other countries in its debt.

According to government estimates, about 60 enterprises with $350 million USD in Japanese investments are operating in Sri Lanka. However, the current instability has put a halt on several projects. For example, the $464 million USD construction of a new multilevel terminal and viaduct at Bandaranaike International Airport by Taisei, which was to be finished by 2023, has been put on hold due to the suspension of loans by the Japan International Cooperation Agency (JICA).

India’s commercial interests in Sri Lanka are mostly investments by large Indian corporations, which have been affected by the shaky foreign exchange reserves and fuel shortages. For example, automotive companies like Tata Motors have stopped exporting vehicle kits to the country and halted assembly plant production.

Similarly, India-Sri Lanka trade and economic engagement is also facing the brunt, with synergy on avenues like civil-nuclear cooperation and tourism taking a backseat.

Nonetheless, the crisis has also provided opportunities for India. For instance, Indian planters and exporters are expected to fill the gap due to the ailing tea industry in Sri Lanka, the world’s top exporter of traditional loose-leaf tea. As a result, compared to last year, the average price for orthodox leaf in India has increased up to 41 percent. Additionally, even as Sri Lanka’s apparel industry shows signs of recovery in 2022, India has received a large number of orders from Europe and Latin America, with Tamil Nadu’s textile industry lobbying for removal of import duties to reap real-time benefits.

Moreover, in 2021, Sri Lanka, approved a proposal to develop the strategic Colombo Port’s Western Container Terminal under a public-private joint venture with India and Japan for 35 years, soon after it had scrapped a deal with the two to develop the Eastern Container Terminal. Notably, the deal preceded a United Nations Human Rights Council resolution on Sri Lanka’s war crimes accountability during its civil war, which was approved despite rejection by China and abstentions by both India and Japan.

The impact of the weakened Sri Lankan rupee will also be reflected in or negatively affect the financial performance of Indian and Japanese businesses that have direct operations there. But for the long-term stability of the region at large, India and Japan cannot afford to neglect the situation and avoid accountability as leading middle powers.

Trade concerns notwithstanding, for both Japan and India, the geopolitical implications of the crisis are more significant, especially in the wake of the emerging Fourth Taiwan Crisis and China’s reunification plans. However, through their value-based, common outcomes-oriented approaches, India and Japan can stem the Chinese tide in Sri Lanka and turn the tables.

National outcry (e.g., the unifying Aragalaya protests) against the Rajapaksas is unlikely to thaw despite it being too early to dismiss them as politically insignificant, China may have made a “failed bet” on the family-regime. Hence, India and Japan would be looking to maximize their leverage amid the present government’s lack of a clear impetus toward China.

One of the cornerstones of the Indo-Pacific security architecture has been the India-Japan broader partnership on common regional challenges, including third-country cooperation. Their strategic interests have been increasingly aligning to counter China’s hostility and clout, decrease economic overdependence on China, and effectively build regional convergence to lessen the impact of the China-US hegemonic conflict.

In the IOR, apart from the United States, the two have been coalescing with like-minded partners such as Australia and the European Union to enhance maritime security. Sri Lanka is surely a vital cog in that scheme.

The India-Japan joint summit in March, bilateral meeting on the sidelines of the Quadrilateral Security Dialogue (Quad) in May, and 2+2 dialogue in September have all reaffirmed the significance of collaborative projects in the Indo-Pacific.

The US call to support Sri Lanka’s debt restructuring and the EU’s support for “joint and inclusive” actions are welcome steps for India and Japan, which should seek to coordinate with these states for bringing Sri Lanka back on track and for boosting the long-term security landscape.

In the future, for the development of the island and the IOR, India and Japan could capitalize on their current commitment and existing investment by ideating the formation of a democratic trilateral with Sri Lanka. Their priorities should be focusing on maritime security, climate action, tourism, and trade so as to further weaken the China calculus for the region.