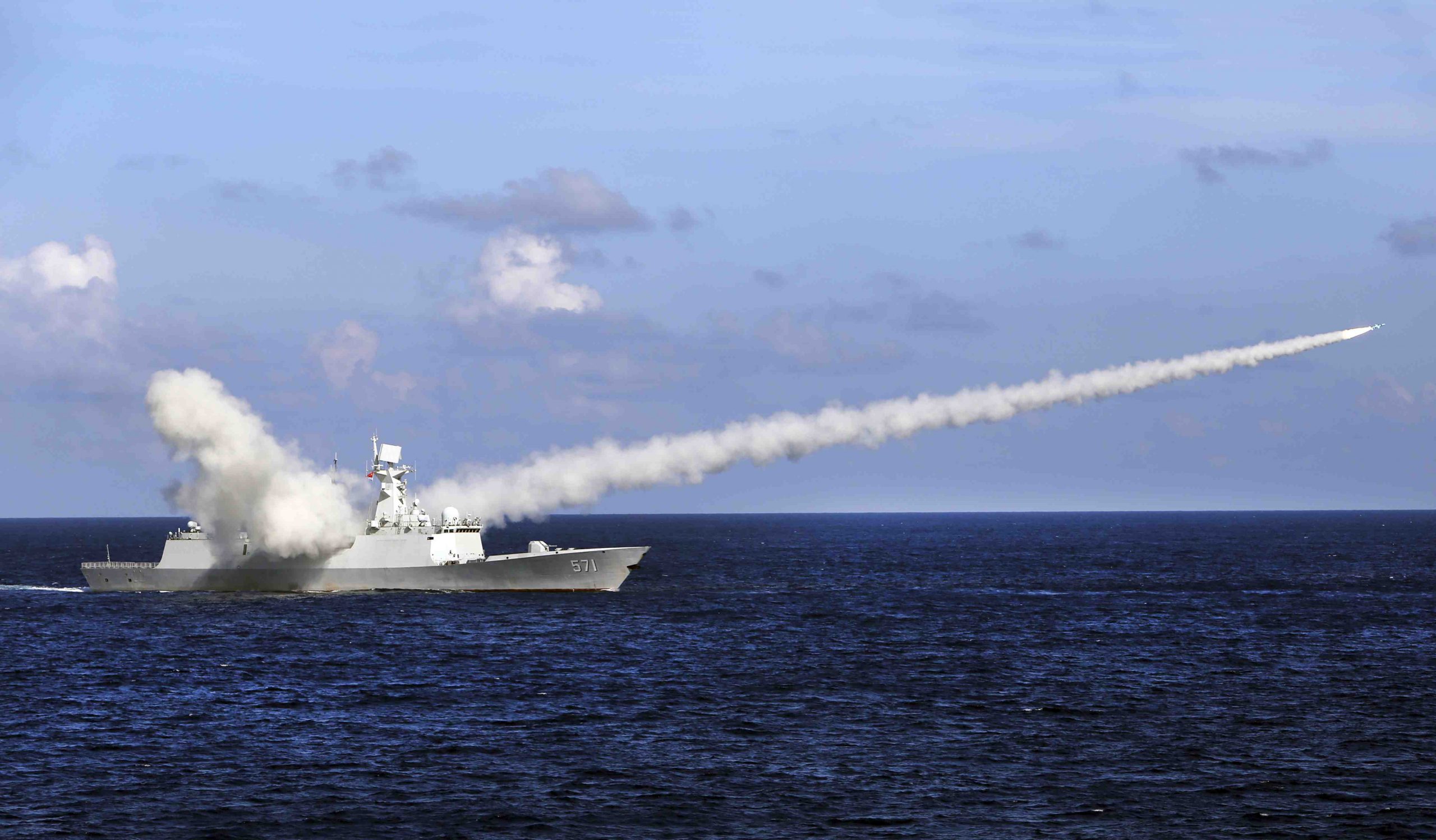 FILE - In this July 8, 2016, file photo released by Xinhua News Agency, Chinese missile frigate Yuncheng launches an anti-ship missile during a military exercise near south China's Hainan Island and Paracel Islands. Ahead of the 2021 annual Congress meetings, China is continuing its military buildup and recently authorized its coast guard to use force to remove foreign presences in what it considers Chinese waters. (Zha Chunming/Xinhua via AP, File)

United States Secretary of Defense Lloyd Austin and Japanese Defense Minister Nobuo Kishi’s March 2021 meeting brought them to an understanding, in principle, to closely cooperate in the event of a military clash between China and Taiwan, according to reports. This brings to the fore the heightened levels of security oscillations developing in East Asia.

Though there were no specifics on the operational aspect of this mutual understanding, the fact that this emergency scenario could well present itself to the regional players in the near future has amply been put on the table and discussed.

During their recent visit to Tokyo, Austin and U.S. Secretary of State Antony Blinken called out China, saying they “acknowledged that China’s behavior, where inconsistent with the existing international order, presents political, economic, military, and technological challenges to the Alliance and to the international community.”

The rapid expansion of China’s missile arsenal and its related technology upgrades reflect the strategic value and rising stakes in Beijing’s military build-up against Taiwan. In particular, China’s potential seizure of Taiwan by virtue of a military takeover has been at the forefront of many discussions of late.

Nominated to lead the U.S. Indo-Pacific Command, the U.S. Pacific Fleet commander, Admiral John Aquilino, spoke about the threat in his March 23 testimony before the Senate armed services committee. Alarmingly, he acknowledged that the United States’ most dangerous concern is “that of a military force against Taiwan. Forces positioned to be able to respond quickly...combined with the international community, with our allies and partners.”

The concerns discussed stemmed from multiple strategic challenges and stark security policy posturing adopted by China, both in the recent past and emanating out of the long-term missions and strategic tasks of the PLA.

A critical development in knowledge of China’s activities comes from the February 2021 Federation of American Scientists (FAS) report. Relying on satellite imagery, the report confirms the significant expansion of the number of ballistic missiles silos, concealed tunnels, and launch pads of the Chinese PLA Rocket Force (PLARF) in the Jilantai training area situated in the northern part of central China.

This area spreads amid wide stretches of desert and mountain ranges, showcasing at least 16 silos under construction and over 140 missile launch pads built since 2013. Currently there are 18 to 20 operating silos.

The upcoming silos at China’s Jilantai facility are relatively smaller and appear designed to accommodate the slimmer solid-fuel ICBMs, namely the DF-41 and DF-31A range. The DF-41 version is a MIRV-capable ICBM version, as is the future submarine-launched JL-3 ICBM which will also be capable of carrying multiple warheads.

The FAS report critically points out that an increase in the number of silo-based solid-fuel missiles and the number of warheads they carry could well enable Beijing to enhance its capabilities to penetrate other countries’ missile defense systems. This is taking a major leap forward in the nuclear modernization efforts of the PLA’s missile force, and impacting China’s nuclear posture in the future.

These developments seem to reinforce the Pentagon’s 2020 Annual China Report submitted to U.S. Congress. That report observes that the PRC’s growing range of missile forces complement its size and capabilities, as it modernizes and diversifies its land-, air-, and sea-based nuclear delivery platforms and their precision strike capabilities. Notably, the number of warheads on the PRC’s land-based ICBMs is expected to grow to roughly 200 by 2025.

Moreover, the Pentagon has reiterated that developments post-2019 suggest that China intends to increase the peacetime readiness of its nuclear forces by moving to a launch-on-warning (LOW) posture with an expanded silo-based force.

In China’s revamped robust approach, proponents of coercive nuclear policy and limited war-fighting strategies could find encouragement. The observed developments, posed against China’s public utterances, clearly bring out the dichotomy in China’s interpretation and application of power, both militarily and politically.

The Fruits of Military Modernization

The results of most of China’s military reforms have become more observable since early 2020. Showcasing its military prowess to the world, Chinese armed forces are signaling that they have come a long way from being essentially a rustic and bucolic Red Army that waged a “People’s War” more than seven decades ago. The over four-decade-long robust military modernization program undertaken by the PLA has become the primary foundation to attain the objectives of China’s military strategy.

Perhaps most critical here is the timing. 2021 marks the 100th anniversary of the founding of the Chinese Communist Party. Realization of this centennial goal remains the nucleus of Xi Jinping’s “China Dream,” which includes at its core the goal of national rejuvenation (read: reunification) of Taiwan with the mainland.

Given that Taiwan tops Xi Jinping’s agenda, the principal challenge for democratic stakeholders in the region would indubitably be ensuring continuing stability in the region. This can only be accomplished by maintaining a status-quo posture in cross-Strait ties.