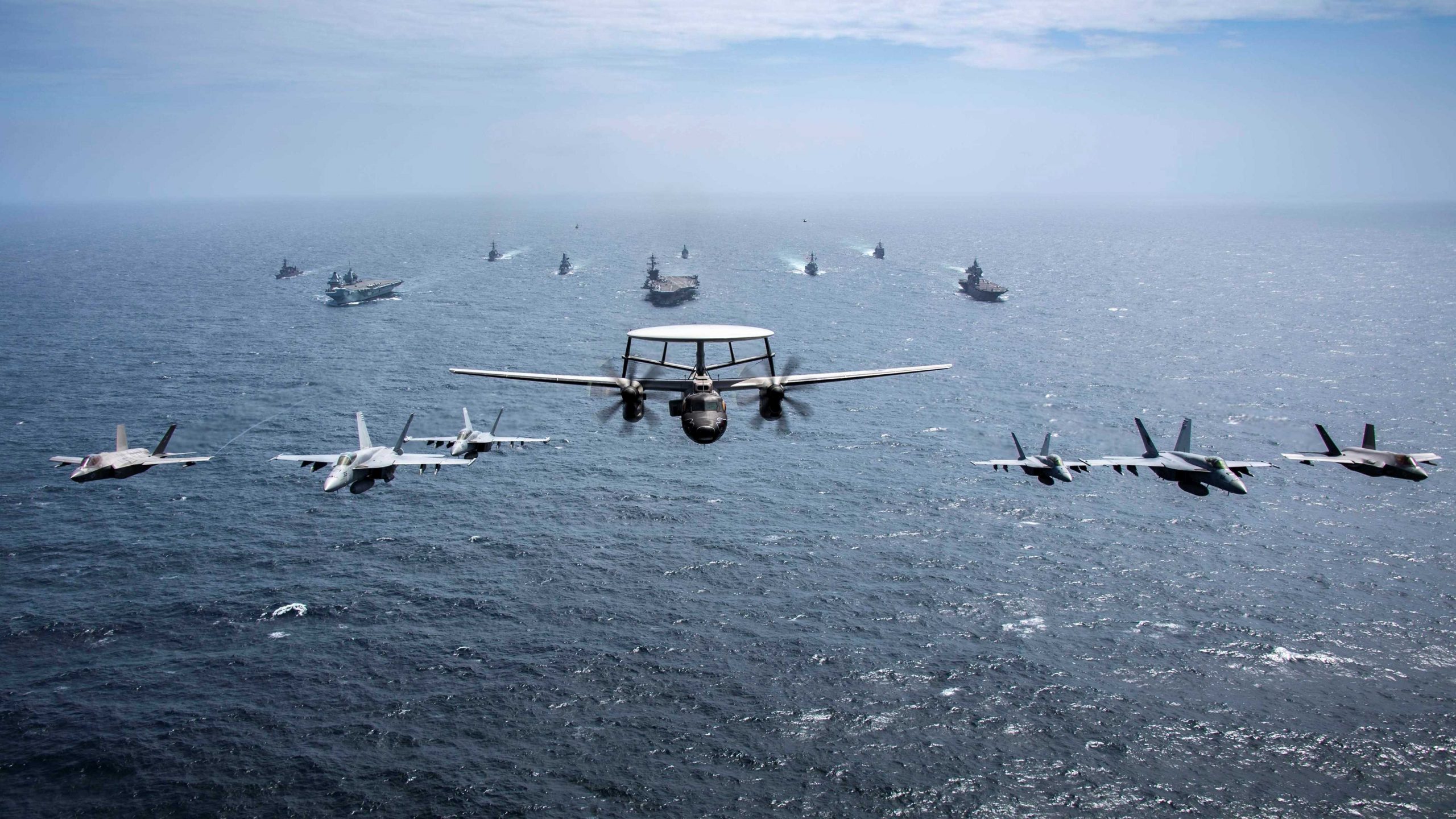 Joint exercises of naval vessels of six countries, including Japan, the United States and the United Kingdom, were wrapped up in the South China Sea on October 9. On October 2 and 3, drills were also conducted in waters and airspace southwest of Okinawa, Japan’s southernmost prefecture, with three aircraft carriers from the U.S. and the U.K. taking part.

In response to the joint exercises, a total of 150 Chinese fighter jets and other military aircraft intruded into Taiwan’s air defense identification zone (ADIZ) repeatedly in menacing formations from October 1 to October 8. The widespread view among observers is that Beijing’s intense reaction was due to the extraordinary deployment of three aircraft carriers in the region at the same time.

In addition to the two aircraft carriers from the U.S. and one from Britain, there were three Japan Maritime Self-Defense Force (MSDF) vessels taking part in the exercises this time, including the helicopter-carrying destroyer JS Ise. Joining them were frigates from the Netherlands, Canada and New Zealand.

The training exercises moved from waters off Okinawa on October 4 to the South China Sea. Then they were carried out in a formation, as if encircling Taiwan. The two U.S. carriers did not participate in the maneuvers in the South China Sea, but a senior official of Japan’s Defense Ministry has noted that the fact that the six countries have moved in coordination with each other for the purpose of keeping China in check was “of epoch-making significance.”

A shift in the balance of military power between Washington and Beijing is behind the emphasis on cooperation ー not only between Japan and the U.S., but with as many countries as possible.

Back in 1996, when China fired missiles repeatedly into waters near Taiwan in an attempt to intimidate the island ahead of its presidential election, the U.S. dispatched two aircraft carriers to waters near the island in a show of force. China backed down that time due to the obvious difference in power between Washington and Beijing.

Twenty-five years later, China has now deployed more than 1,250 surface-launched intermediate-range missiles, such as the DF-21D anti-ship ballistic missiles that are referred to as “carrier killers” in the area. Beijing has thus formulated a denial of access by U.S. carriers to the Taiwan Strait, which has prompted Washington to chart out a strategy to restrain China involving its allies and other friendly countries.

There were other pivotal moves on October 3 during the six-nation joint exercises. The MSDF carried out practice drills off the coast of Shikoku with the U.S. Marine Corps, testing the take-off and landing ability of F-35B advanced stealth fighter jets on the MSDF’s helicopter carrier JS Izumo, which had been equipped with a heat-resistant deck.

Japan’s Air Self-Defense Force (ASDF) is expected to begin deploying F-35Bs in fiscal 2024 with a view to mounting them on the Izumo and other vessels.

British Royal Navy’s cutting-edge aircraft carrier the HMS Queen Elizabeth has already been equipped with F-35Bs, and Japanese government officials say they place high expectation on seeing an accord reached between Japan and the U.K. to enable each country’s F-35Bs to take off and land on the other country’s carriers to boost efficiency in such tasks as supply missions.

This time, although China backed down on firing missiles in the Taiwan Strait as it had done 25 years ago, Beijing had its fighter jets relentlessly intrude into Taiwan’s ADIZ.

As tensions increase in the situation surrounding Taiwan, there is an urgent need for upgrading the cooperation among the armed forces of concerned countries, such as the United States and the United Kingdom, and Japan.