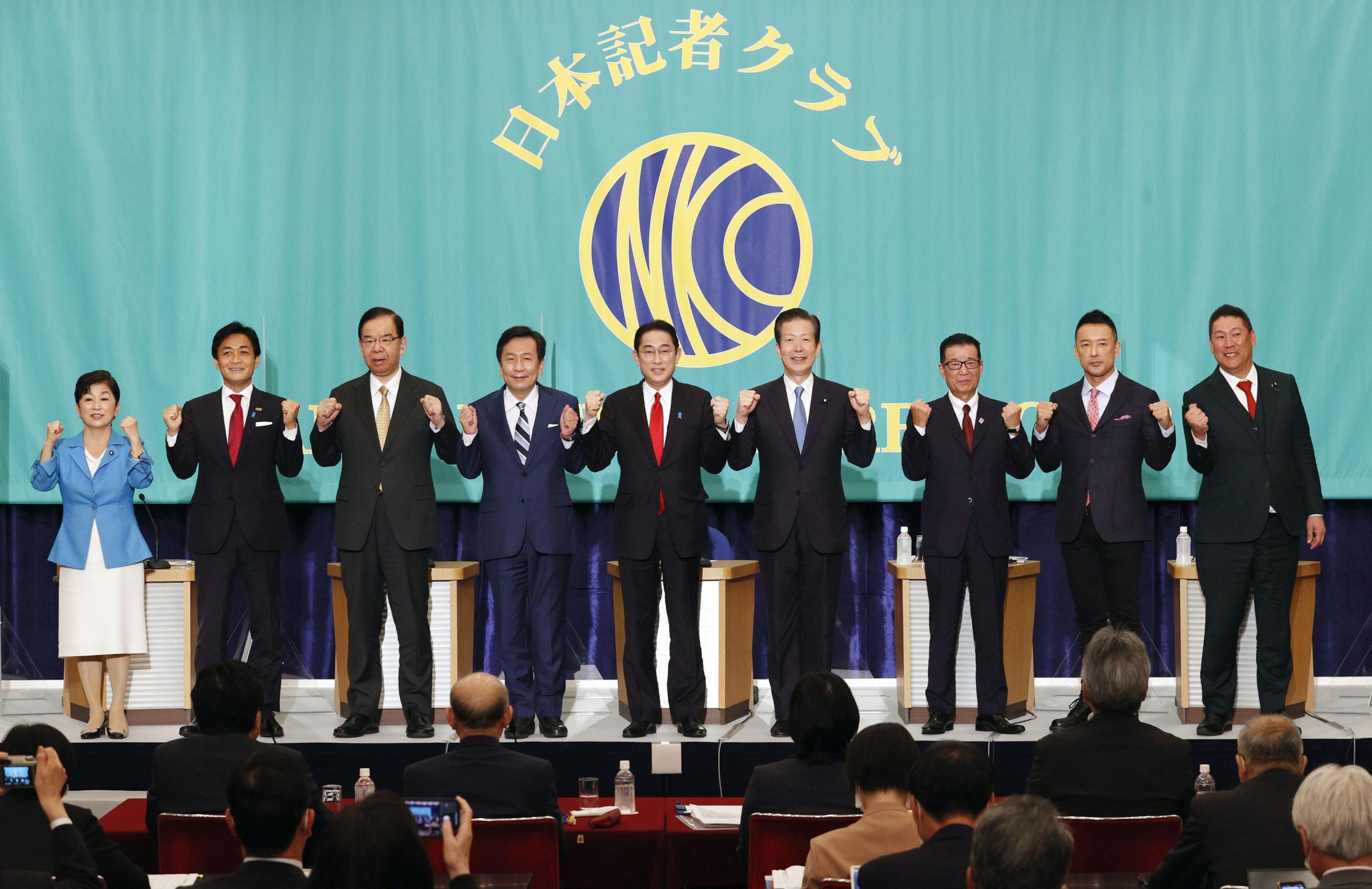 The party leaders campaign on October 18, 2021, ahead of Lower House elections. Prime Minister Fumio Kishida (LDP) is in the center, flanked on his right by Komeito leader Natsuo Yamaguchi (fourth from right) at the October 18 debate.

At long last, interest has grown in recent years within Japan and abroad about the influence of the People’s Republic of China (PRC) — and specifically the Chinese Communist Party (CCP) — in Japanese politics, society, education, economy, industry, defense, and foreign policy.

A recent example was the exposé on Taro Kono’s financial dealings with China through his family’s company, Nihon Tanshi, on the eve of the ruling Liberal Democratic Party (LDP) presidential election on September 29. That reporting likely caused him to lose as some party members withheld support — correctly, in this writer’s opinion — due to ethical or national interest concerns, or both.

While there was temporary relief that the worst-case scenario (of a Kono Cabinet) was avoided, many other people (this writer included) are worried about the Fumio Kishida administration’s ability to deal with China. After all, Kishida heads the Kōchikai faction, known to be pro-trade and generally sympathetic to China.

While Kochikai is also pro-U.S.-Japan alliance, the liberal leaning faction has historically been reluctant to invest in defense beyond the bare minimum, even though its founding father, Shigeru Yoshida, often said Japan must make contributions in the security realm commensurate with its growing economic strength. (This fact is either unknown or overlooked by subsequent generations.)

But there is an equally worrisome aspect of the Kishida Cabinet that needs addressing. It is one that has plagued the LDP since it formed a partnership with Komeito, the Soka Gakkai lay-Buddhist-backed political party which has close political (and business) ties to China, more than two decades ago.


What’s Going on at the MILT

Komeito has not only acted as a brake on efforts at revising Article 9, the so-called peace clause, of the postwar Constitution, and drafting more proactive security legislation. It has curiously been able to maintain a stranglehold on the position of Minister of Infrastructure, Land, and Transportation (MILT).

One smaller party in a coalition consistently having the portfolio for a particular ministry might not be odd if that party is especially knowledgeable in that field, but this does not seem to be the case. Readers can easily see how vested interests, corruption, and other problems will emerge (if they have not already).

This is not exclusive to Komeito or to Japan. It can be true of any party, in any country ー even, or especially, dictatorships like the PRC with the Chinese Communist Party. There are also other problems discussed later.

In the decade since the LDP-Komeito coalition returned to power in December 2012, Komeito members have been named to head the ministry every single time.

In the near decade before that, only two members of Komeito served as MILT minister, for just a total of three years. Those two men served as MILT ministers during the latter part of the Junichiro Koizumi administration (2001-2006), beginning in 2004, through the governments of Shinzo Abe (2006-2007) and Yasuo Fukuda (2007-2008).


Dependence on the Coalition Junior Partner

During that time, and the years since then, the LDP gradually grew weaker and has had to rely on its coalition partner in elections even more. As a result, the two parties cooperate in supporting one another’s candidates, deconflicting contested seats wherever possible.

Komeito, which practices strong party discipline (second only to the Japan Communist Party), is believed to have around 6-8 million voters (estimates vary), out of the approximate 7-9 million reported followers of Soka Gakkai. These numbers pay great dividends for the party and the LDP.

Added to this is the large number of votes coming from approximately 4 million workers in the construction industry, controlled by Komeito since it has singularly headed the MILT (since 2012).

Also, Komeito won 8 of the 9 seats it was contesting in the 2017 Lower House elections.

The popularity of the Komeito (and Soka Gakkai) is said to be declining nationwide, but they clearly remain a force with which to be reckoned. Some observers argue in fact Komeito is even stronger than ever, despite their declining numbers.

Unlike LDP party members, whose numbers are large but are unmotivated and disorganized, Komeito supporters — i.e., Soka Gakkai (which has become a very wealthy organization due to the fact that religious organizations are not taxed and some related companies have done very well business wise with China) — are highly organized and easily mobilized. Known in fact as the LDP’s kōdō butai (operational forces), they act as the casting vote in many or most of the 289 single-seat constituencies, where in some cases only 20,000 to 30,000 additional votes are needed to change the outcome.

They can also cause LDP candidates to lose and have done so in the past. They reportedly did this to Sanae Takaichi, the recent candidate for the LDP party presidency, in her 2003 bid for reelection in her former Nara constituency. As such, LDP members are afraid to cross Komeito.

As such, observers say, the LDP cannot easily end its marriage of convenience with Komeito.

Komeito is nevertheless extremely unpopular with more conservative members of the LDP and its supporters, who often pressure the LDP leadership to cut ties with Komeito. One reason is its resistance to revising the Constitution.

High among the other reasons are the Komeito’s unwillingness to be consistently and strongly critical of China, especially in human rights in Hong Kong, Tibet, and among the Uyghurs of Xinjiang, etc., and the emerging hegemon’s incursions into Japanese waters and airspace.

Some party insiders point to even more serious reasons why relations with Komeito need to be ended, noting the LDP’s over-reliance on Komeito is bad for the party’s identity and policies.

They point out that it is necessary to break Komeito’s hold on the ministerial position over MILT, as all information on infrastructure projects in Japan —especially roads, highways, ports, and airports— among other critical data, are evidently leaked to China and other foreign governments via Komeito.


Too Close to China to Protect Japan

Of course, it is entirely understandable and expected that Komeito, as a coalition partner, and obviously an important one at that, receives a cabinet post or posts for its electoral and legislative cooperation.

However, there are significant problems with the current arrangement, begun during the Second Abe Cabinet starting in December 2012 and continuing today through the Yoshihide Suga (2020-2021) and now Kishida governments.

The first problem, alluded to earlier, is the fact that when one party gains a stranglehold over a particular ministry or industry, vested interests and corruption are bound to set in. Certain liberties are taken, expectations met, rules overlooked, contracts arranged, payments made, kickbacks delivered, etc. This politically convenient quid-pro-quo between the LDP and Komeito is not good for transparency, accountability, and democracy.

The second problem concerns Japan’s external security. MILT has jurisdiction over the Japanese Coast Guard, and the JCG is greatly hampered in its ability to deal with the threat the People’s Republic of China poses daily in Japan’s Senkaku Islands and surrounding waters.

It is unhealthy to have a party historically close to the PRC, and which looks away from China’s human rights transgressions and other behavior that goes against international norms, in charge of the men and women who are responsible for protecting Japan’s waterways and coastlines.

Just like it would be dangerous to have a police chief in bed with organized crime, or a minister in charge of Health, Labor, and Welfare in the palms of the pharmaceutical companies, so to would it be deeply worrisome for the minister in charge of the coast guard so close to the country whose ships routinely harass Japanese fishermen and which permits the use of force on Japanese ships in Japanese waters through the revision to its Maritime Police Law.

Not only in the ministry, but also in the Diet the Komeito has acted to limit the ability of the JCG to respond. There have been calls to revise the Japan Coast Guard Law in response to the new Chinese maritime law going into effect, but Komeito and pro-China members of the LDP (of which there are quite a few) have helped to stall discussions.

Komeito’s too-close-for-comfort ties with the People’s Republic of China have been seen in other ways.

Cheng Yonghua, the PRC’s longest serving ambassador to Japan (2010-2019), is a graduate of Soka University and one of the original six students admitted to the school based on an agreement between Soka Gakkai founder Daisaku Ikeda and Chinese premier Zhou Enlai. Cheng served multiple times in Japan from the 1970s onward, and today is the vice chairman of the China-Japan Friendship Association, which is headed by former foreign minister Tang Jiaxuan.

While Komeito’s ties with China have undoubtedly helped Japan in the past, particularly in establishing relations, they most certainly have also harmed Japan’s interests at times as well.

If Kishida’s LDP wins the upcoming general elections on October 31 and he is chosen prime minister again, he should immediately take away the MILT post from Komeito and assign it to someone with a true interest in protecting Japan’s waters and infrastructure.

Komeito could have another, less potentially dangerous, post. This long-needed move would clearly raise morale in the JCG, which cannot truly perform its mission knowing its political bosses are close to the PRC.

It would also certainly increase support toward the Kishida administration, especially as so many people throughout Japan recognize that Komeito is unsuited for the MILT position.

Sadly, the LDP has gotten to the point where it can’t even win elections without the vitality of its junior coalition partner, repeating the negative spiral of dependency. However, the more it aligns itself with and depends upon Komeito, the more it will alienate its traditional voters.

The LDP leadership needs to understand this unhealthy arrangement is unsustainable politically, and dangerous from a national security perspective.

Eldridge is an author and the former political advisor to the U.S. Marine Corps in Japan.