EDITORIAL | After Big Win, Kishida’s Big Tasks are the Constitution and Inflation 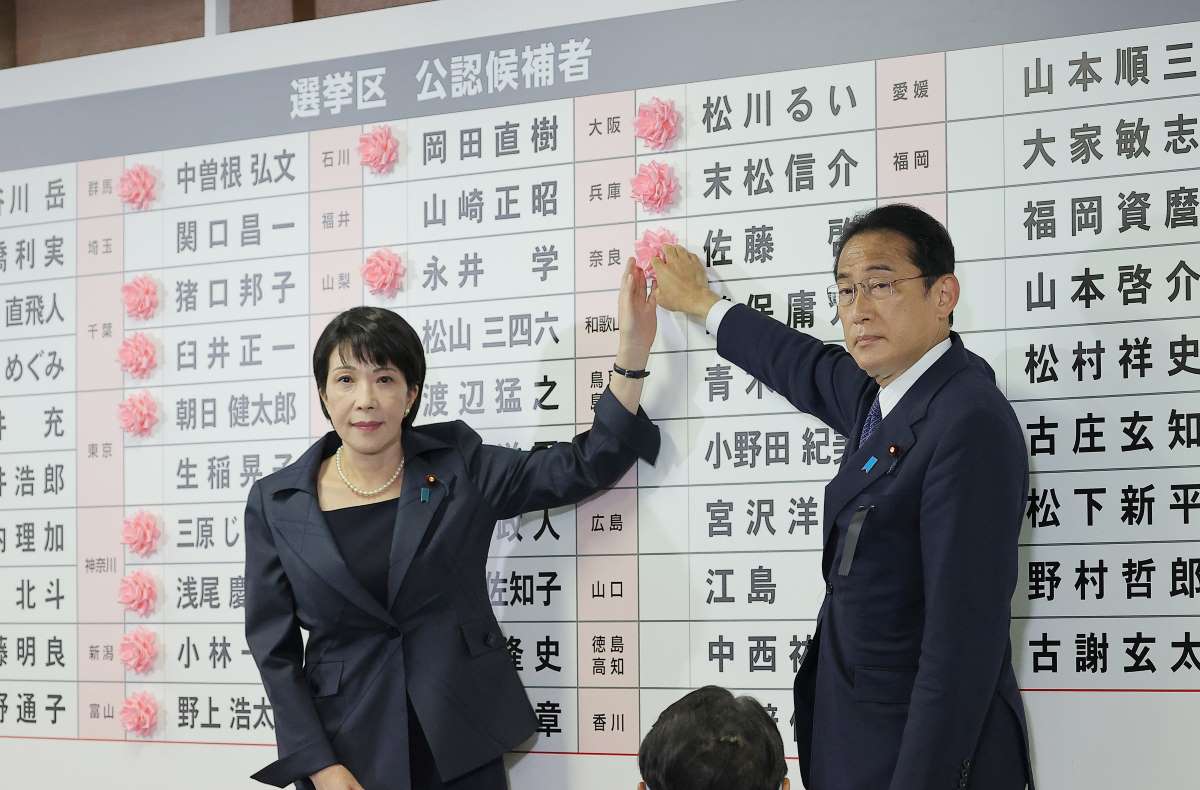 Prime Minister Fumio Kishida and President Sanae Takaichi at the Liberal Democratic Party headquarters in Nagatacho, Tokyo, on July 10, 2022, the day of the Upper House election, (Photo by Akihiko Otsuka.)

Results of the Upper House election on July 10 gave the ruling Liberal Democratic Party (LDP) and Komeito a majority of the seats that were contested. Half of the total number of seats in the Upper House had been up for grabs. With that win, they now control more than two-thirds of the Upper House seats and finally have the strength needed to press forward with amendments to the Constitution.

The election results mean that Prime Minister Fumio Kishida has a stable base of support in the Upper House. The Prime Minister and the ruling parties should now make their utmost efforts to fulfill their public pledges and move without delay to reflect the will of the people.

As the election campaign was nearing the finish line, former Prime Minister Shinzo Abe lost his life to a despicable act of terror. In the face of this unforgivable challenge to democracy, we could appreciate all the more the preciousness of every vote cast.

But we cannot simply mark time now. It is the duty of the politicians to directly face up to the longstanding challenges that have accumulated in postwar Japan.

Now, more than ever, we need to accomplish constitutional reform. Prime Minister Kishida must work to fulfill Abe’s long-held aspiration and not flag in his resolve to see it become reality.

The security environment surrounding Japan is becoming increasingly harsh. One neighbor, Russia, is invading Ukraine, while another, China, continues to pursue hegemonic expansionism. At the same time, North Korea continues its military provocations.

As it stands now, our Constitution, the foundation of the nation, provides no means for us to respond adequately to current challenges. “Postwar pacifism,” the belief that peace can be ensured by defending Article 9, is nothing but an illusion. The ongoing tragedy in Ukraine is proof positive of this fact.

The LDP has listed four priority items for the constitutional reform it envisions:

Regarding the priority of spelling out the role of the SDF within Article 9, Abe once said, “This is the crux of the matter in ridding ourselves of the postwar regime.”

We concur in this recognition and believe it is high time to put an end to meaningless debate about whether the existence of the SDF violates the Constitution.


Time for Komeito to Step Up and Act

Attention now turns to the cautious stance of the Komeito concerning constitutional reform. Its official position has been that most Japanese support the activities of the SDF and do not believe that its existence violates the Constitution. Therefore, possible reform should continue to be considered. Since it has only been willing to go that far, the Prime Minister should work to persuade Komeito to agree to overt recognition of the SDF in the Constitution.

If Japan and the Japanese people are to be defended, the deterrence capabilities of the SDF and the Japan-United States alliance need to be reinforced.

Those political parties which supported an increase in defense spending are the ones that increased their number of seats in the Upper House. That shows that the electorate well understood the urgent necessity to strengthen the nation’s defense capacity.

The LDP’s political platform clearly calls for the nation’s defensive capability to be substantially upgraded over the next five years, with an eye to increasing defense spending to more than 2% of GDP.

In December 2021, the government revised the National Security Strategy and established its budget proposal for the 2022 fiscal year. We now need to commit to the introduction of a counterstrike capability and speed up the timetable in order to get defense spending to above 2% of GNP faster than five years from now.

We would like to see Japan pursue security cooperation with NATO members and other countries that share our values in order to preserve peace and prosperity in the region.

Measures Against COVID-19 and Rising Prices

Once again, the number of new COVID-19 cases is increasing, and we need to adopt adequate countermeasures to deal with the threat.

First, we need to establish a Cabinet-level “Infectious Diseases Emergency Management Agency” that will function as a central command. The medical care system also needs to be drastically bolstered, including measures for home care workers and patients in elderly care facilities, among others.

At the same time, measures need to be stepped up to help the economy climb out of the deep hole it fell into as a result of the COVID-19 pandemic.

The soaring cost of living is an especially urgent issue. Energy and food prices have risen sharply and an increasingly wide range of products and services will likely be affected by inflation.

Increased prices for daily necessities hit low-income groups the hardest. It is therefore important to aid those people truly suffering due to the high prices. At the same time, we need to make sure that the most effective inflation countermeasures are implemented.

The calls by the opposition parties for the reduction or elimination of the consumption tax did not cause a big splash among the electorate. Voters don’t want to support grandiose promises without revenue sources to pay for them.

Rather, it would seem that voters viewed such promises of pork barrel spending with a jaundiced eye. The government should bear that in mind in its handling of the economy.

The question is how the Prime Minister proposes to realize his “new capitalism” concept. Kishida has basically been sticking to the Abenomics approach.

Abe’s economic formula has resulted in improvement in such areas as the employment picture and corporate earnings. However, major problems have continued to pile up in such areas as delivering labor productivity and higher wages.

Can Kishida’s new capitalism eliminate those problem areas where Abenomics has proved inadequate? Hopefully, the Prime Minister will offer measures effective in addressing those points.

Rectifying the income gap that has been exacerbated by the COVID-19 pandemic and inflation has also become a pressing problem. Kishida has not had much to say about the matter, so it remains to be seen how earnest he will be in tackling the issue.

In the days to come, the Prime Minister should further spell out the approach he plans to take, for example through tax reform, to strengthen the income redistribution mechanisms.