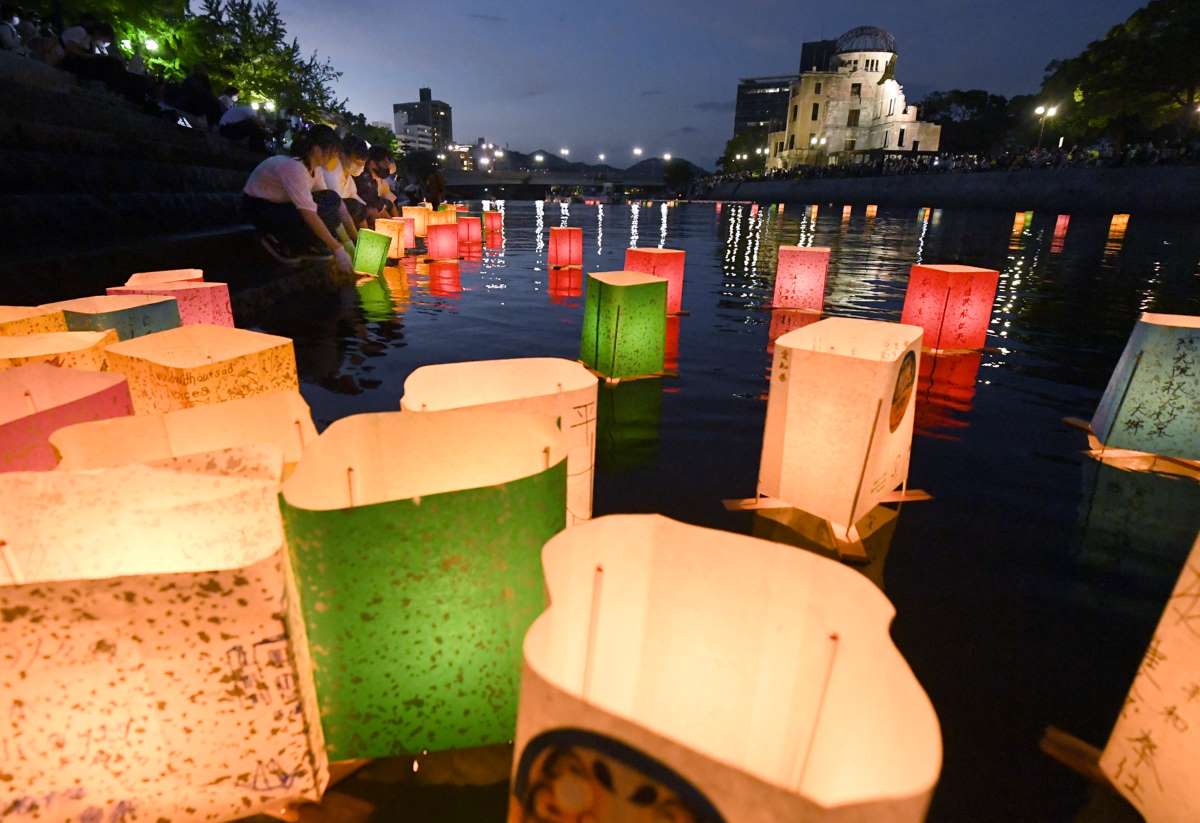 Hiroshima Atomic Bomb Memorial Lantern Floating on the Motoyasu River, on the afternoon of August 6, 2022, in Hiroshima's Naka Ward. (photo by Yuta Yasumoto)

August 6, 2022, marked 77 years since the atomic bombing of Hiroshima (and of Nagasaki on August 9). It was an event that destroyed countless lives instantaneously and indiscriminately.

In remembrance of those victims, we must renew our commitment to peace.

Now, as the Russian invasion of Ukraine continues, the threat of nuclear war again looms over the world, putting the security of all nations in jeopardy.

As the only country to have suffered atomic bombings on its cities and people, Japan has the responsibility to continue sharing the experiences of Hiroshima and Nagasaki. Using everything in our power, we must ensure that the tragedy remains the world’s first and last.

But however common — if not universal — the wish to abolish nuclear weapons may be, there is an enormous gulf between the ideal and the reality.

In a June 13 announcement, the Stockholm International Peace Research Institute in Sweden estimated that, as of January 2022, the world possessed 12,705 nuclear warheads.

Russia, as it continues its invasion of Ukraine, has responded to increasing sanctions from the United States and European nations with threats of using its nuclear weapons.

Meanwhile, North Korea has repeatedly carried out missile launches and nuclear tests banned under international law. And, according to a report by the United States Department of Defense, China intends to possess at least 1,000 nuclear warheads by 2030.

In his peace declaration, Mayor Kazumi Matsui of Hiroshima explained that the crisis in Ukraine had led to a global trend of accepting the expansion of nuclear deterrence. He called for the realization of a “world without nuclear weapons” to change this trend.

But, in reality, it is nuclear deterrence that has undeniably been holding back the use of nuclear weapons.

When Prime Minister Fumio Kishida attended the Nuclear Non-Proliferation Treaty Review Conference in New York, he stressed that he would bridge the gap between the “‘reality’ we face in the harsh security environment” and the “ideal of a world without nuclear weapons.” But the roadmap he presented lacked concreteness.

The Ukraine crisis has made it clear that the risk of nuclear war is a real threat, and pragmatic discussions on deterrence need to be held. The ideal of a nuclear-free world is noble, but simply advocating it will not protect the peace.

The Horrors of the Atomic Bomb

For the first time, the number of survivors holding the atomic bomb survivor’s certificate fell below 120,000, as of the end of March 2022. The average age of the survivors has risen to 84.53 years.

Their memories of the ravages of the atomic bomb need to be passed on to the next generation as a constant reminder of its horrors. Recent events have confirmed the importance of conveying the tragic aftermath of the atomic bombings, as well as the need for nuclear deterrence.

August 6 is a day to raise awareness of the horrors of the atomic bomb and remember its victims. At the same time, it is also a day for a renewed, pragmatic commitment to peace to ensure that the tragedy will never be repeated.