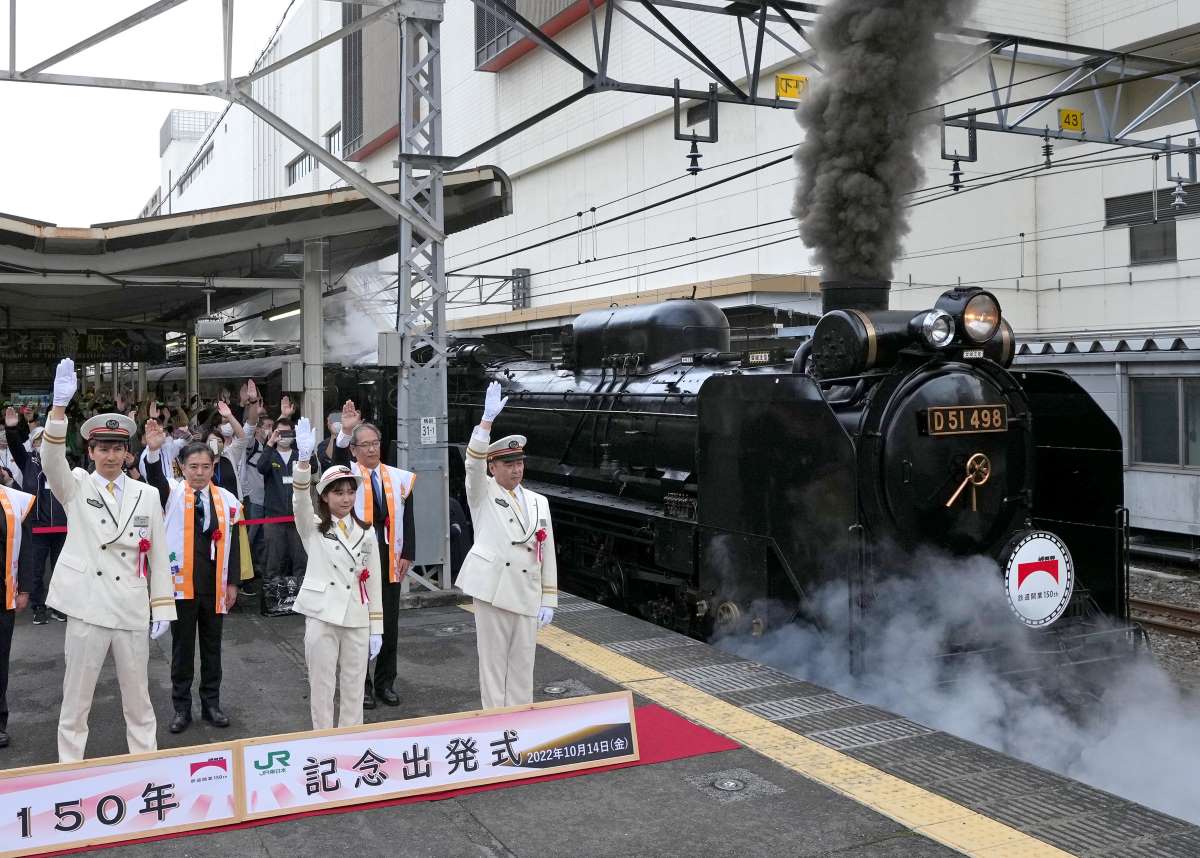 In commemoration of the 150th anniversary of the opening of the railway, a departure ceremony was held at JR Takasaki Station in which 150 people signaled the departure of the steam locomotive SL train "Yagisha Tetsudo Hyakugou" on October 14, in Takasaki City, Gunma Prefecture (© Sankei by Shiro Onishi).

It has been 150 years since Japan's first train line opened, linking Shimbashi (Shiodome) with Yokohama (Sakuragicho). The astonishing development of Japan's rail system that followed mirrored the nation's modernization.

We should be thankful for the great efforts of those who have gone before us. Nonetheless, the path Japan rail must take until it reaches its 200th anniversary will be perilous.

When Japan's train system marked its centennial in 1972, it was basking in the last glow of its glory days. In line with the slogan "Hikari to the west,"the Shinkansen bullet train service was extended as far as Okayama. And speeds on existing special express lines were further increased.

Meanwhile, the countdown commenced for the breakup of the Japan National Railway (JNR) nationwide system that finally came in 1987.

Breakup of the Japan National Railway

The preceding year had seen the start of a bitter management-labor battle as the JNR's "productivity improvement movement" (marusei undo) was frustrated due to staunch resistance from labor unions, including the Kokuro (National Railway Workers' Union) and Doro (National Railway Locomotive Engineers' Union).

The unions drew support for their "movement to oppose marusei" from the Japan Socialist Party (JSP), then the major opposition party, the Japan Communist Party, and elements of the press, especially The Asahi Shimbun.

Workplaces were destroyed during this labor strife, and in 1973 passengers irate at sabotage carried out by the unions as part of the struggle reacted violently. All these developments indicated that the JNR was on its last legs and foreshadowed the breakup and privatization of the system that finally came in 1987.

Privatization of the Railway System

The privatization carried out over the subsequent 35 years can for the most part be judged a success, although strains in the system have also appeared.

The system has managed to make it through the massive drop in the number of passengers carried during the COVID-19 pandemic. But it faces a "triple punch" as the nation ages, rural areas become further depopulated, and the network of expressways extends to more areas. Today, management at all the JR companies are under the gun.

JR East (JR Higashi) and JR West (JR Nishi) loudly lament the burden of maintaining local lines, even as the red ink on their books swells. As for JR Hokkaido, when it was launched it had approximately 3,200 kilometers of track, but since then about 600 kilometers of track have been scrapped. Furthermore, the decision has been made to scrap a section of the Hakodate Main Line once the Shinkansen is extended to Sapporo by 2030. Thus, the downscaling of the JR Hokkaido rail network seems to be accelerating.

Grasping a Grand Design for the Future

JR Tokai (Central Japan Railway Company), operator of the Shinkansen lines, has bet its fortunes on a futuristic linear Shinkansen system. But when that might begin business is totally unknown due to opposition from the governor of Shizuoka Prefecture.

In short, all private railway companies in Japan are beset by problems.

European countries, by contrast, are rethinking the role of railroads, as trains produce considerably less volume of carbon dioxide emissions than motor vehicles or airplanes. Several European governments are now providing them with large subsidies.

Linear Shinkansen service in particular is something that the national government should be proactively involved in as a growth strategy. Simply switching to bus service does not offer a cheap and simple solution to the question of whether or not to abolish local rail lines. Rather, the government must clearly spell out a "grand design" as to what form local transportation should take.

The 150th anniversary of the start of rail in Japan provides us with a good opportunity to look back at the sad tale of the dismantling of the JNR national railways system, and commit ourselves to pursuing unremitting reforms of the nation's rail systems.

As was the case when all night trains between Tokyo and Kyushu were abolished following the split up and privatization of the JNR, we cannot assume smooth cooperation between the various rail companies will always take place. Of course, it goes without saying that safety should be given top priority at all times.