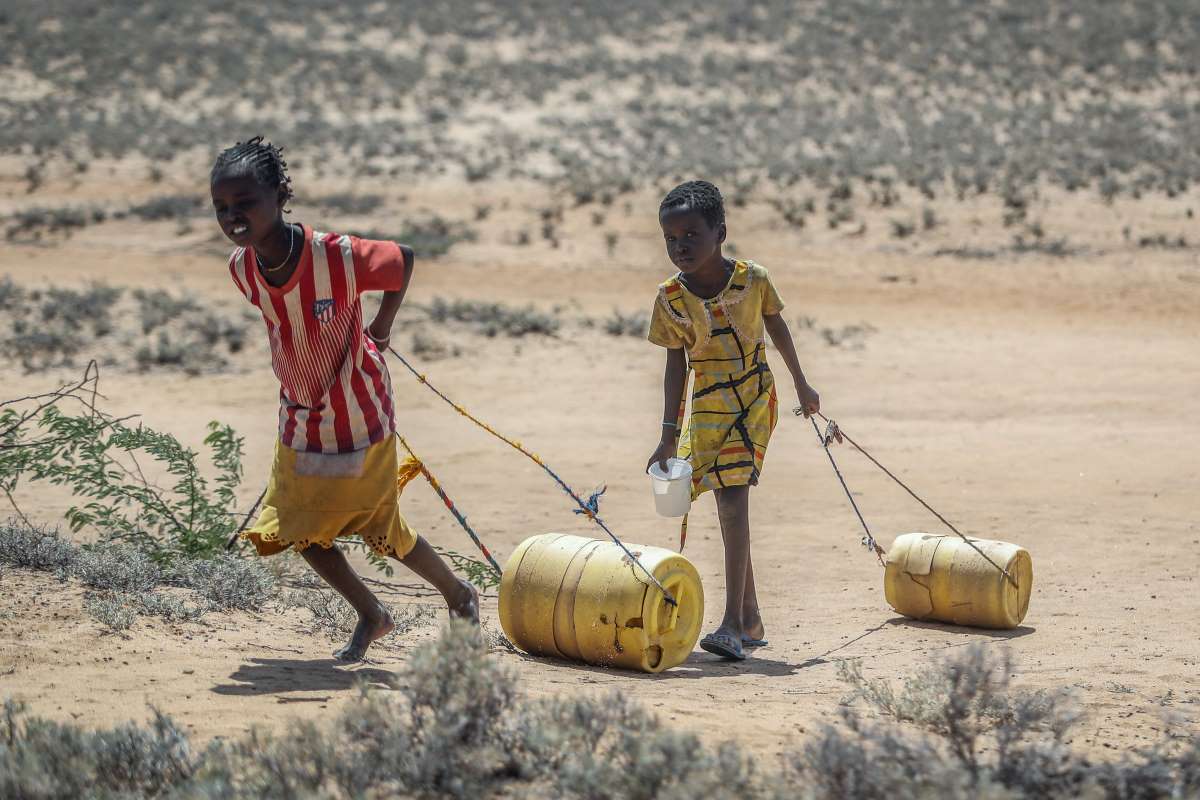 Young girls pull containers of water as they return to their huts from a well in the village of Lomoputh in northern Kenya Thursday, May 12, 2022. Russia's war in Ukraine has affected millions of impoverished people who are going hungry in Africa, the Middle East and parts of Asia. (AP Photo/Brian Inganga.)

Africa is sometimes referred to as the “last frontier for growth.” No wonder, then, that China and Russia have been aggressively seeking to extend their influence there through tactics like reckless financing and subcontracting of security services.

Japan should not turn a blind eye to the tactics these countries are using to spread the authoritarian model for political rule. Instead, we should join hands with the United States and other democratic nations to oppose these efforts.

Japan is the lead sponsor for the Eighth Tokyo International Conference on African Development (TICAD 8), scheduled to take place in northern Tunisia on August 27-28. The meeting is a valuable diplomatic tool for Japan since it brings together African leaders from throughout the continent. We should use the opportunity to highlight Japan’s role in the world.

The Biden administration has announced a new United States strategy for strengthening ties with countries in Sub-Saharan Africa. This reflects a clear concern in Washington DC about the increasing approaches that China and Russia have been making in Africa.

US officials point out that, in its pursuit of commercial and political advantage, China’s activities in Africa have sorely lacked transparency and openness.

As for Russia, they say that the Kremlin has sought to tie economic and security assistance to a softening of criticism of Russia’s invasion of Ukraine.

Developed nations as well as the many small countries in Africa each have their own single vote in the United Nations General Assembly. We cannot afford to ignore the importance of their influence on international public opinion. It is notable that few voices of criticism of Russia have been heard from Africa.

At the end of July, about the time that grain shipments from Ukraine restarted, Russian Foreign Minister Sergey Lavrov made a diplomatic swing through Africa, during which he blamed US and European sanctions on Russia for the food supply crisis.

Lavrov’s blame of the West for the Russian military blockade of the Black Sea that prevented the Ukrainian grain from being shipped is a lie. African countries are the biggest victims of the food crisis.

The “free and open Indo-Pacific” concept being championed by Japan and the United States envisages inclusion of the eastern shore of Africa. But that presupposes the elimination of authoritarianism and corruption in Africa, as well as embracing the rule of law.

Nowadays, China, South Korea, and other countries are holding conferences with African nations, but Japan’s TICAD was the original such event. It started in 1993, and TICAD 8 will be the latest in the series.

Where things fall short, however, is the low level of knowledge about the conference and its significance, even in Japan. Africa has entered an era in which investment will be more important than assistance. Hopefully, the conference will highlight business opportunities in Africa, with both the public and private sectors doing their utmost to increase interest.

Clearly, the most urgent issue to African nations is how to overcome the food crisis. Unfortunately, having come down with a case of COVID-19, Prime Minister Fumio Kishida will not be able to attend TICAD 8 in person. Nonetheless, he should deliver a compelling message to the meeting online.