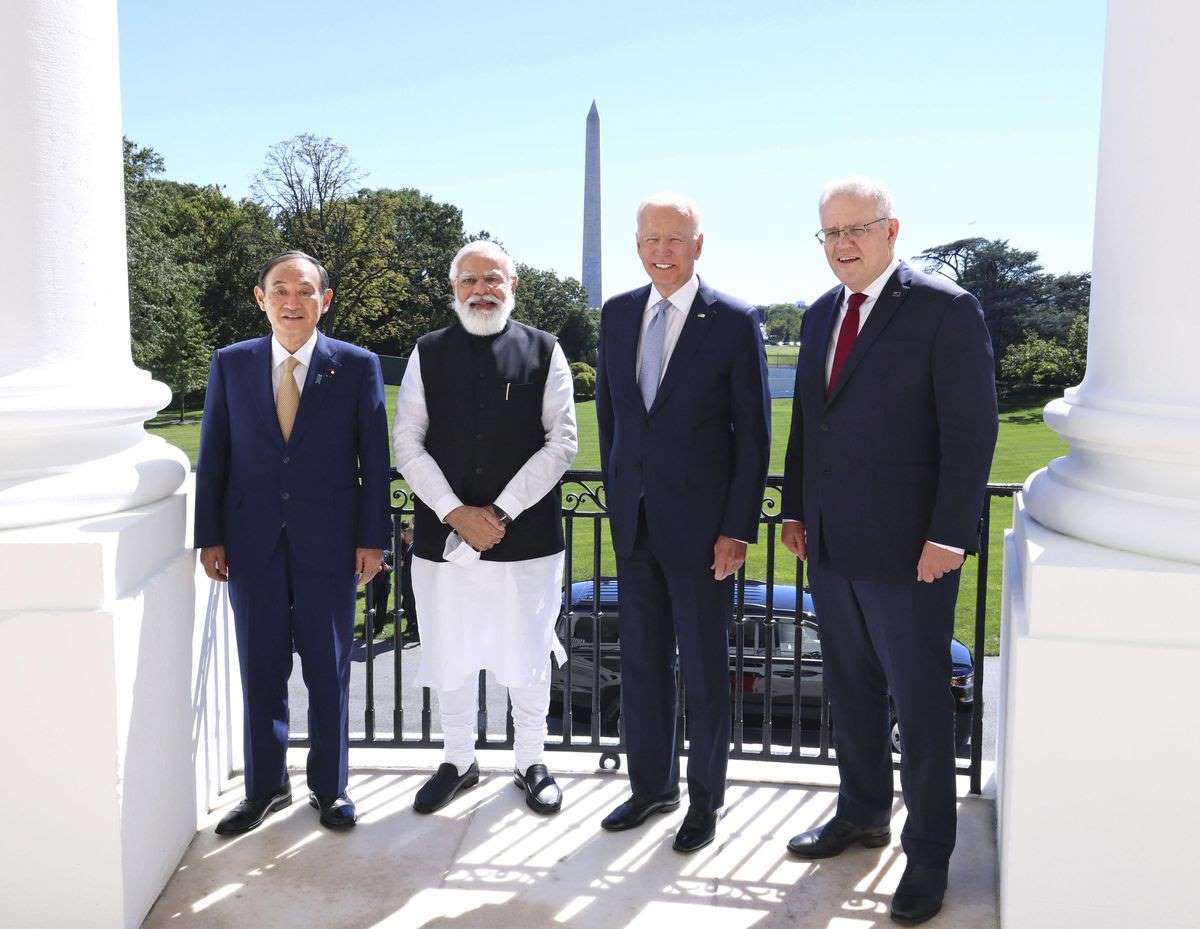 Quad leaders meet at the White House in Washington, DC on September 24, 2021.

Leaders of the four democracies of Japan, the United States, Australia, and India — known as the “Quad” — held their first in-person summit meeting in Washington on September 24.

In two hours at the White House, the parties agreed to work together closely for the security and prosperity of a free and open Indo-Pacific region amid shared concerns about China’s hegemonic behavior. They also concurred on holding annual meetings of the Quad leaders and foreign ministers.

It is important that Japan, the U.S., Australia, and India play a central role in the peace and prosperity of the region.

In a joint statement at the close of the summit, the leaders renewed their resolve to promote “the free, open, rules-based order, rooted in international law and undaunted by coercion, to bolster security and prosperity in the Indo-Pacific and beyond.”

They also announced readiness to cooperate in such fields as response to the COVID-19 pandemic and vaccines against it for the Indo-Pacific region and the world, a new Quad infrastructure partnership, space, clean energy, and critical and emerging technologies.

We earnestly hope to see these tasks progress steadily. Regional order and steady growth can only be materialized by states that respect freedom and democracy, rather than the authoritarian government of China.

The joint statement also called for support for and cooperation with the Association of Southeast Asian Nations (ASEAN) and European Union (EU) member countries. Broadening the range of friendships in the region is of vital importance.

The statement emphasized that the Quad would “continue to champion adherence to international law, particularly as reflected in the UN Convention on the Law of the Sea (UNCLOS), to meet challenges to the maritime rules-based order, including in the East and South China Seas.”

At the same time, the parties reiterated their demand for the “complete denuclearization of North Korea in accordance with United Nations Security Council resolutions, and also confirm the necessity of immediate resolution of the issue of Japanese abductees.”

In the summit, Japanese Prime Minister Yoshihide Suga pointed out that “ensuring peace and stability in the Taiwan Strait is of key importance.” He also expressed serious concern about the current circumstances in Hong Kong and the Xinjiang Uyghur Autonomous Region.

If China fails to change, the Quad should strengthen its checks on China’s human rights abuses by clearly spelling out these problems in a joint statement.

The Australian navy, for example, has participated since 2020 in the Malabar naval exercises between Japan, the U.S., and India. In April 2021, the maritime services of five nations — Japan’s Maritime Self-Defense Force and the navies of the U.S., Australia, India, and France — carried out joint drills in the Bay of Bengal located in the northeastern part of the Indian Ocean. Such defense cooperation should be encouraged to develop into regular meetings of the Quad defense ministers.

The Quad summit marked the final overseas trip for Prime Minister Suga, who will soon step down from office.

The trip was accompanied by some off-the-mark criticism by a few opposition party politicians, who seemed to think he should only stay home to focus on COVID-19 issues. However, if the Japanese prime minister failed to take part in the face-to-face summit of the Quad, the effects of the group’s deterrence against China would be vastly diminished.

It is our hope that Prime Minister Suga will emphasize the high significance of the Quad as he hands over responsibility for Japan to his successor.