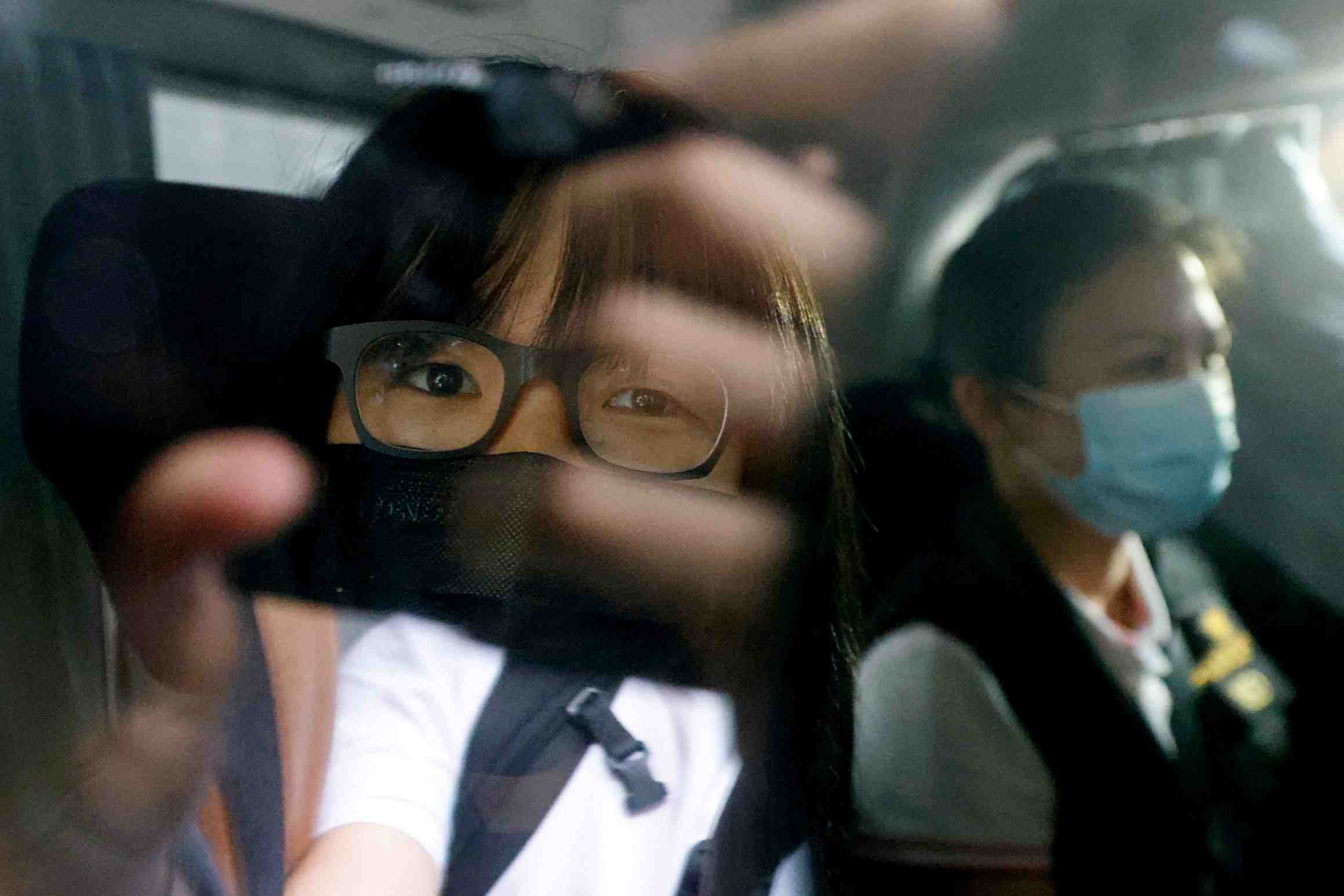 Hong Kong Alliance in Support of Patriotic Democratic Movements of China Vice-Chairwoman Tonyee Chow Hang-tung is seen inside a vehicle after being detained in Hong Kong, China, September 8, 2021. REUTERS/Tyrone Siu

In free and democratic countries such as Japan, there is no reason whatsoever for university lecturers to obtain official approval for the courses they teach.

However, in Hong Kong, now firmly back under the control of the Communist Party of China, any teacher who invites students to objectively scrutinize political issues could find themselves being arrested and thrown into jail.

The teaching profession is being forced to operate under the shadow of the National Security Law, imposed on Hong Kong by Beijing, which bans acts of secession, subversion, terrorism and collusion with foreign forces.

It has resulted in the arrest of dozens of opposition figures and activists.

Through an intermediary, JAPAN Forward reached out to a young person in Hong Kong who is familiar with life on campus. We asked if teachers and lecturers are changing the content of their courses.

“Definitely,” came the reply. “They avoid material related to political issues, since they are afraid that some people may misinterpret their words and report them to the National Security Department of the Hong Kong Police Force.”

We then asked about the impact on students and the mood in the universities. We were told by our source that “students are avoiding political-related topics. Also, Hong Kong’s universities tend to be biased towards China in terms of teaching and management.”

Our source said: “Some universities have professors from China serving as principals or vice-presidents and now plan to set up branches in Shenzhen or Beijing. National security education is on the curriculum and the bias towards China is getting worse.”

Recently, the management at Hong Kong’s Polytechnic University (Poly-U) ordered the removal of hundreds of copies of a student magazine that touched on freedoms under the security law.

The authorities recognize that it was anger among students and young people over China’s heavy-handed coercion of autonomous Hong Kong’s freedoms which led to the largely peaceful pro-democracy demonstrations which peaked in 2019, before they were forcefully halted.

Student and teacher organizations which are perceived as being sympathetic to the pro-democracy cause, are now being systematically silenced.

Hong Kong’s Professional Teachers’ Union recently announced it would disband, saying it was left with no choice due to the current hostile political climate.

The decision by the 95,000-strong union – the city’s largest teachers’ group – came after Communist Party propaganda mouthpieces called the group a “malignant tumour” that had to be eradicated.

Another sign the higher education sector in Hong Kong is being dominated by the Chinese Communist Party is a new “patriotic” exam which is being forced upon young undergraduates.

At Poly-U, students must listen to a three-hour lecture which explains the world from the perspective of the Chinese Communist Party and reminds them of the punishments handed out to some of the student protestors.

After listening to the rhetoric, the students must complete a multiple choice test。Anyone who fails the exam will have to retake it until they present their teachers with what are deemed to be the “correct” replies.

According to the South China Morning Post, several other universities in Hong Kong are following a similar approach to Poly-U, and this term they will make it compulsory for students to learn about national security from seminars, talks or lectures.

Professor Steve Tsang from the University of London says that the developments on the campuses in Hong Kong reveal the new political reality in the city.

Even though many organizations have decried what they see as an outright assault on academic freedom, Professor Tsang believes that the authorities are largely indifferent to international criticism.

“The Chinese Liaison Office in Hong Kong is behaving in a way which is first and foremost for an audience of one. That one person lives in Zhongnanhai in Beijing and his name is Xi Jinping,” says Professor Tsang, who is the Director of the SOAS China Institute.

“In their opinion, how the rest of the world sees their actions is less important than whether what they do and what they say meets the approval of the supreme leader of China.

“It is clear to them that he expects a robust position to be taken against any kind of dissent which could potentially challenge the authority of the Communist Party.”

Professor Tsang, who is originally from Hong Kong, believes that while some academics in the city are bowing to the Communist Party demands, others are trying to remain independent when deciding their curriculum. He also believes that student responses vary.

“There are some students who are still prepared to take risks, even though it could potentially get them into difficulties. Others are playing it safe, to ensure that they do not end up in jail under the national security law.

“I don’t think we should judge them because people have a right to choose,” he explained.

We asked if there is a risk to students in other countries, including Japan and the United Kingdom, when it comes to studying the politics of China.

Professor Tsang replied: “Even though the security law in Hong Kong has global reach, which means that anybody anywhere in the world who speaks about Hong Kong could be affected, I have the advantage of being able to ignore it because I am in London.

“I and my colleagues at SOAS, University of London are committed to independence and integrity. We will continue to teach and engage with our students in the same way as we have done before, although we take care to protect people from the impact of this law upon their studies.”

Duncan Bartlett is a regular contributor to Japan Forward. Find his essays on JAPAN Forward at this link. You can listen to his podcast, China In Context, via the website of the SOAS China Institute.