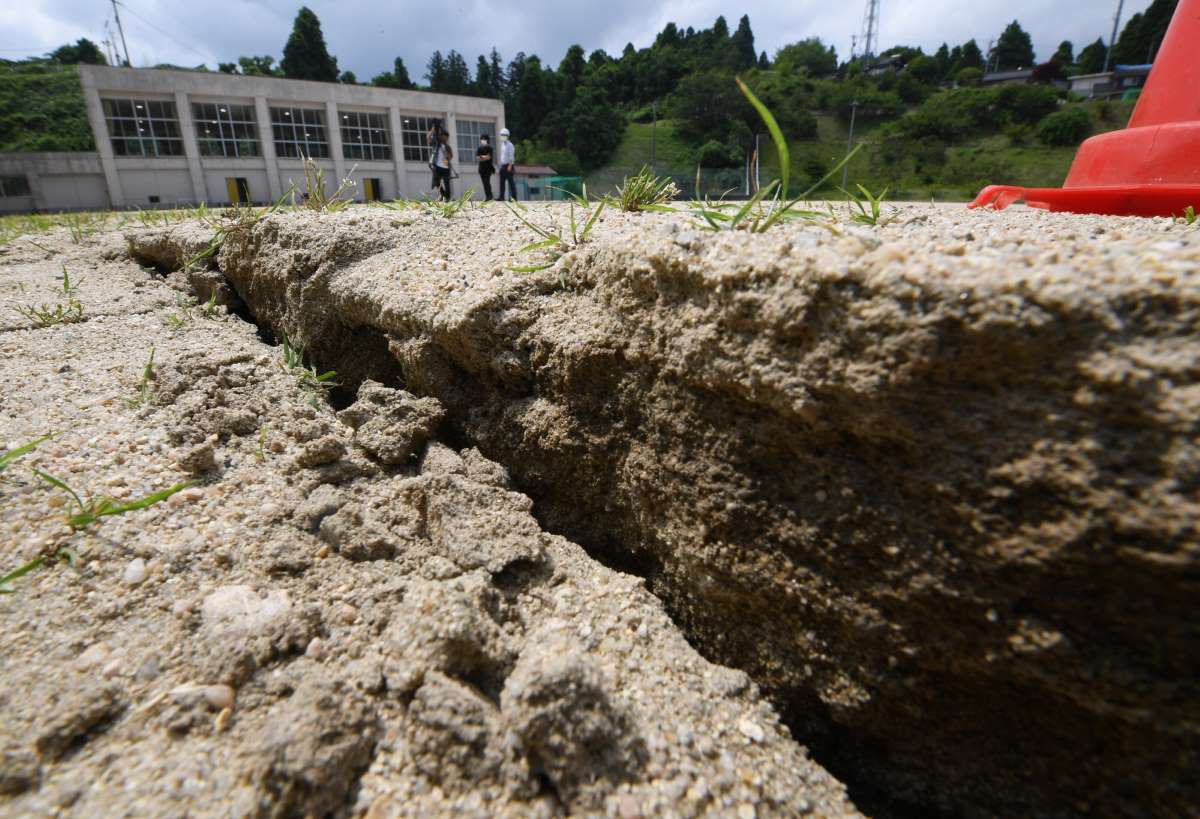 The Noto Peninsula and Ishikawa Prefecture along the Sea of Japan was hit by an earthquake with a lower 6 seismic intensity. Ground cracks in the school playground of Iida Elementary School. (June 20, Suzu City, Ishikawa Prefecture. Photo by Yuta Yasumoto)

A series of powerful earthquakes have occurred in the Noto region of Ishikawa Prefecture.

The Japan Meteorological Agency says that the Noto Peninsula, the epicenter of the series of earthquakes, has been seismically active since December 2020. Japan needs to remain vigilant for more strong earthquakes coming its way.


All of Japan is Active

Another earthquake in northern Hokkaido on the morning of June 20 registered a maximum intensity of 4.

A 7.4 magnitude earthquake with a maximum intensity of upper 6 occurred in March 2022 off the coast of Fukushima Prefecture, causing a Tohoku Shinkansen bullet train to derail.

In October 2021, a 5.9 magnitude earthquake with a maximum intensity of upper 5 occurred in northwestern Chiba Prefecture and paralyzed urban infrastructure in the Tokyo metropolitan area, albeit temporarily.

It is crucial to recognize that the entire Japanese archipelago is undergoing a distinctly active seismic phase — and not just the Noto Peninsula where the recent earthquake swarm continues.

The Noto Peninsula earthquake was smaller in magnitude than the 7.3 magnitude Great Hanshin earthquake in 1995, but because it had a shallow epicenter, the tremors were so powerful in some areas that they knocked over torii gates at Shinto shrines.

An inland earthquake of magnitude 5 to 6 could occur anywhere and at any time. We must act now if we want to save ourselves from collapsing buildings and structures.

Specifically, we can secure furniture, reinforce glass windows, improve the safety of our bedrooms, and have items for evacuation packed and ready to go.

Outdoor structures, such as concrete-block walls and signboards, should be re-examined for earthquake resistance and durability against an earthquake of lower 6 intensity.

The estimated probability of a magnitude 8 to 9 Nankai Trough megaquake occurring within 30 years is 70-80%. That percentage increases to 90% if the estimate is extended to 40 years.


Preparing for the Next One

Likewise, the 2011 Tohoku earthquake was preceded by the 2008 Iwate–Miyagi Nairiku earthquake, which was a magnitude 7.2. This means we should assume that a magnitude-7 class earthquake will occur somewhere in the Japanese archipelago before the Nankai Trough megaquake.

There is no other way to protect our lives in this earthquake-prone archipelago than to start acting now.