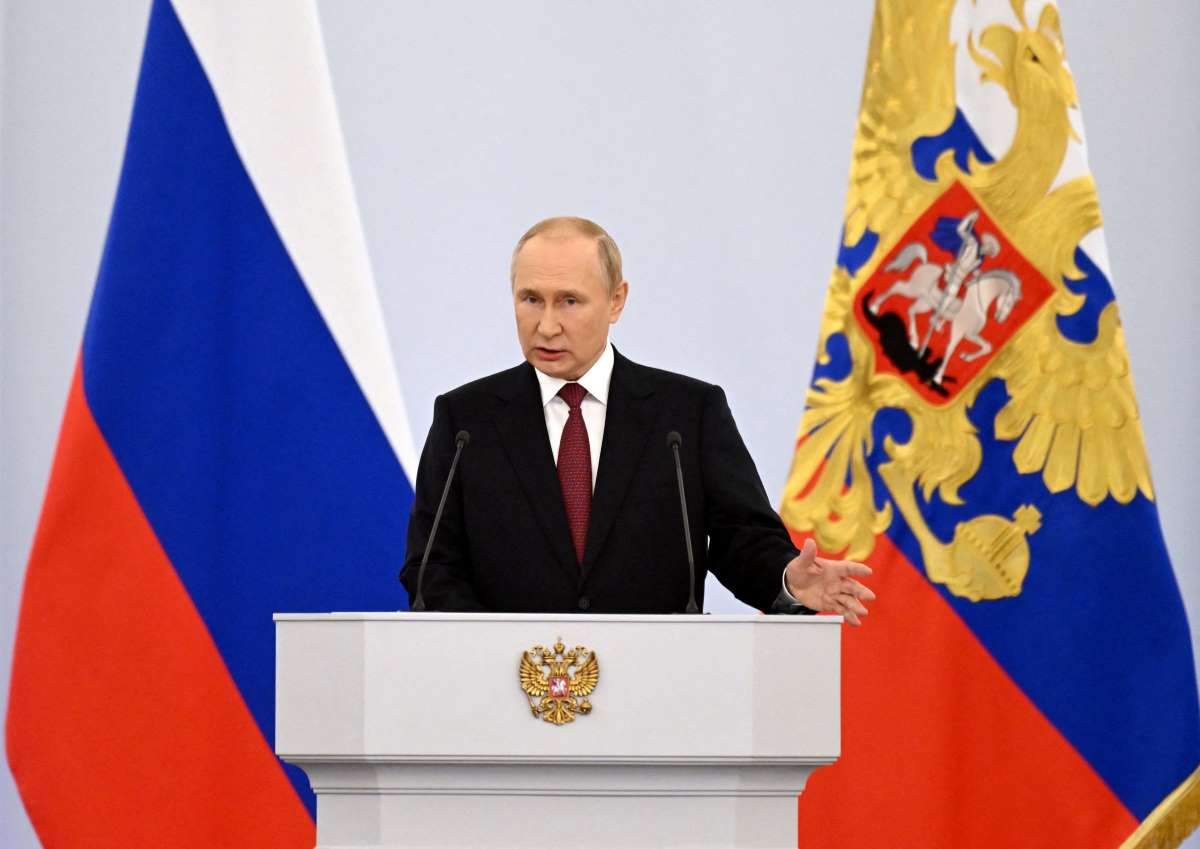 Russian President Vladimir Putin delivers a speech during a ceremony to declare the annexation of the Russian-controlled territories of four Ukraine's Donetsk, Luhansk, Kherson and Zaporizhzhia regionsin the Georgievsky Hall of the Great Kremlin Palace in Moscow, Russia, September 30, 2022. Sputnik/Gavriil

The referendum results are an utter sham.

Under the guise of a "referendum," election workers carried ballot boxes and went door-to-door to voters' homes, accompanied by military personnel who acted as intimidators.

Russia said it held "referendums" on whether or not to join Russia in four occupied regions in eastern and southern Ukraine, where the Russian regime of Vladimir Putin continues to invade without cause. The results in all four regions — Donetsk, Lugansk, Kherson, and Zaporizhzhia — showed overwhelming support for the proposal.

The published approval rates for each one are unnaturally high, ranging from 87% to 99%.

As with Russia's annexation of southern Crimea eight years earlier in March 2014, voting was forced at gunpoint and under duress. It was a false referendum, and it cannot be accepted.

President Putin declared the annexation of the four regions on September 30, following the voting results. Ukrainian President Volodymyr Zelenskyy, however, called for "the expulsion of Russia from all international organizations and the strengthening of sanctions against Russia."

The international community should respond to the annexation by rejecting this travesty in its entirety.

Threats Fed by Turmoil at Home

The Russian public is in an uproar over the call-up of reservists due to a severe shortage of troops. Instead of the exuberance that prevailed at the time of the annexation of Crimea, anti-war protests are frequent, and young people are flooding the border as they flee the country to escape the call to arms.

Vladimir Putin ordered the referendums and the troop call-up. He had become impatient with the Russian military's retreat from the violent Ukrainian offensive that began earlier in September, and wanted to replenish his troops for his war effort.

Forced annexation of the four regions would connect a land corridor from Russia to Crimea. Anxious to protect his stolen gains, Putin has also suggested the possibility of a tactical nuclear strike, saying, “If the territorial integrity of this country and pro-Russian areas of Ukraine is threatened, we will not hesitate to use all available weapons Russia has.”

He implies the possibility of a tactical nuclear strike. This must not be allowed to happen.

Turning Up the Bloodshed

The Putin regime plans to turn Ukrainians in the four annexed regions into "Russian soldiers" and send them to the front lines to fight their fellow Ukrainians without training.

One can't help but shudder at Putin's cold-blooded calculations and grotesqueness.

Tens of thousands of people, including innocent civilians, have already been killed by Russian troops in Ukraine. According to the Pentagon, about 80,000 Russian soldiers have also been killed or wounded.

Mr Putin must stop the brutal killings as soon as possible, abandoning his imperialist obsession with Ukrainian territory and promptly withdraw Russian troops.