Finding a Brilliant Citiscape in the Lingering Autumn Leaves 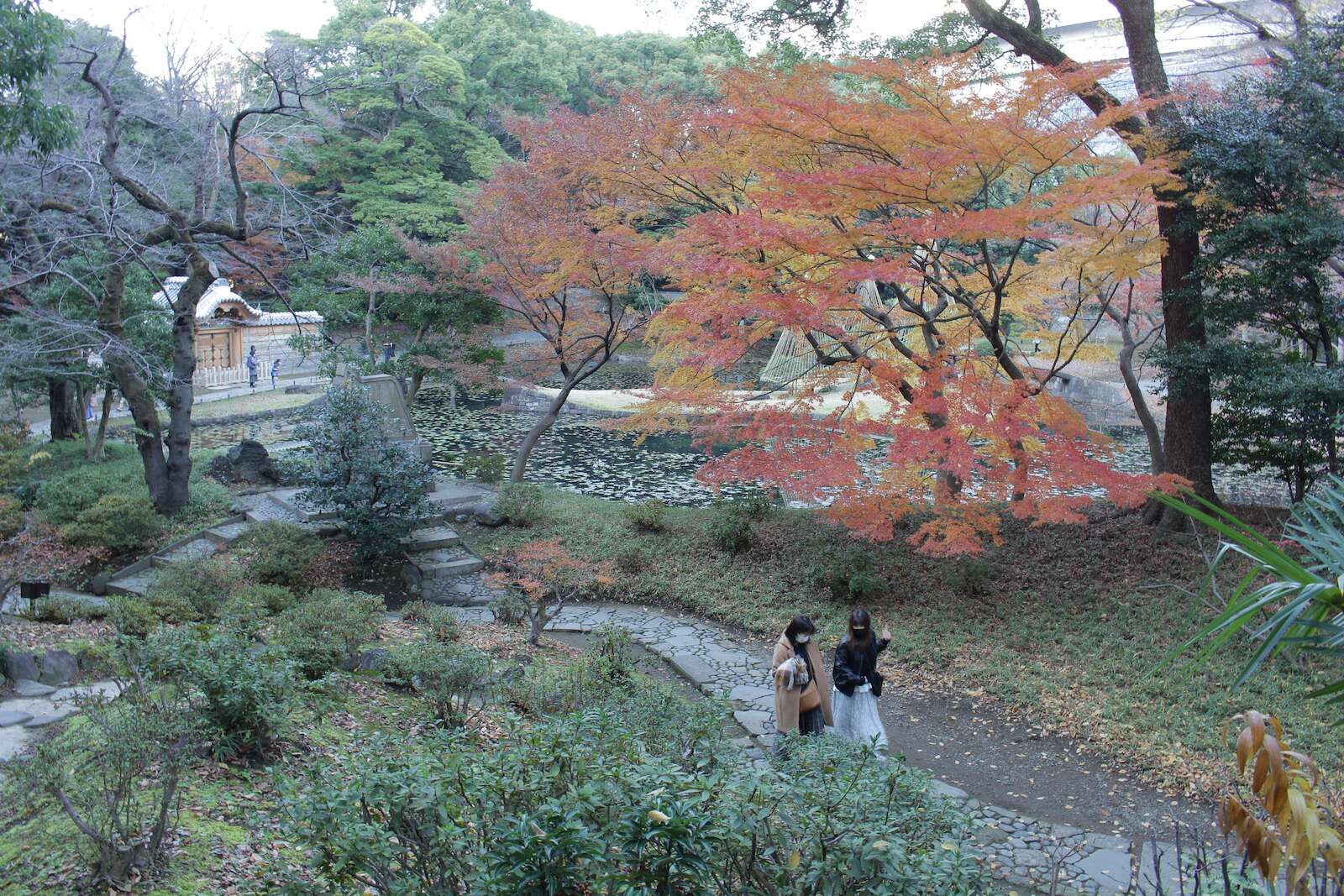 Autumn colors are steadily disappearing from Tokyo with the vivid yellow leaves of ginkgo trees falling to the ground leaving only bare branches behind.

Nonetheless, there are still stands of trees that retain most of their electric yellow foliage.

There are, however, few stands of maple trees with their orange and neon red leaves to be seen outside of the city’s parks.

In the colder peripheral areas of western Tokyo, autumnal colors have largely disappeared but there are places within the central 23-ward area where vivid displays remain.

One such place is the Koishikawa Korakuen Teien that is adjacent to the Tokyo Dome, a venue noted for its baseball games and rock concerts.

The Garden dates from 1629.  It was built for Tokugawa Yorifusa (徳川頼房) the 11th son of Tokugawa Ieyasu, the founder of the dynasty that would rule Japan until the Meiji Restoration in 1867.  It was given its name by a refugee Chinese scholar name Zhu Zhiyu (朱舜水).

The garden belonged to the Mito fief until 1869, when the property was surrendered to the Meiji government. Control passed to the Imperial Japanese Army, which used part of the site for a munitions factory that remained in operation until 1937.

That part of the site was then used for a baseball stadium until the construction of Tokyo Dome in 1989.

The Garden is structured to have stylized miniature representations of four environments: rural rice cultivation, a miniature lake inspired by Lake Biwa, the largest in Japan, a mountain that overlooks the lake, and a river inspired by the Oigawa (大堰川) that flows through Arashiyama in Kyoto.

Elementary school children from Bunkyo Ward plant rice in May and harvest it in September.

The Chinese influence extends beyond the naming. There are two arched bridges within the park that are notably Chinese in style.

The Engetsukyo bridge frames the scene behind it.

The Tsutenkyo is a vivid red, as are other such bridges in Japan.

The view from the bridge includes one of the three ponds in the Garden and overlooks the Kantokutei restaurant.

It is a popular spot for selfies and commemorative photographs for newlywed couples dressed in formal kimono.

There are several designated cultural properties in the Garden.

With the sun shining through them, the maple trees are blinding in their brilliance.

Aside from its vivid display of autumnal colors, the garden is known for its weeping sakura (シダレザクラ), one of the eight major varieties of flowering cherry trees common in Japan.

The Garden is a short walk from the Suidobashi, Idabashi, and Korakuen stations. Those wishing to use the Kantokutei restaurant should enter from the west entrance.

There is no car park for the garden, and at peak times there can be a long wait for slots to open in the car park at the nearby Tokyo Dome City.

Bringing your own food into the Garden is permitted, although you should eat only in designated areas.

I had a saba-shio-yaki teishoku (salt-grilled mackerel lunch set) for ￥1100 JPY (about $10 USD). This is somewhat more than you would pay for similar fare at many restaurants, but still reasonable given the scenic view.

The park is open year round (9 AM to 5 PM, except for the year-end period December 29 to January 1, when it is closed.

Photography using tripods or selfie-sticks may be restricted at peak times.

The garden is covered in the Tokyo Sightseeing Accessibility Guide.  Paths around the several ponds can be navigated in a wheelchair, but access to the various elevated vantage points and several of the listed cultural properties requires climbing steep stone steps.

The Kantokutei restaurant is prepared for wheelchair users.

A leisurely tour of the park ー even with lunch ー will take no more than two hours. Some might find the Baseball Hall of Fame and Museum in the adjacent Tokyo Dome City interesting.

The proximity to the Tokyo Dome is not a plus for the park. The Dome is acoustically transparent. Rock concerts and other noisy events are heard all too easily in the Garden.  or this reason going early or checking the events at Tokyo Dome is advisable.

I personally would suggest a visit to the Koishikawa Botanical Garden, not far north of Koishikawa Korakuen Teien.  Although the names are similar, the two are very different.

Koishikawa Korakuen is managed nature. In contrast, the botanical garden has large parts where there is little intervention and a wide variety of trees, shrubs, and wildflowers are allowed to grow as they will. In addition to autumn colors, the botanical garden is known for higanbana (spider lilies) and ajisai (hydrangea).

Aside from the noise issue, Koishikawa Korakuen Teien is a good example of a Tokugawa era aristocratic formal garden. It incorporates design principles that are still widely used today.

Because of its ease of access and low admission price, it is an excellent place to visit when you need a break from the endless blocks of generic office buildings that cover so much of Tokyo.