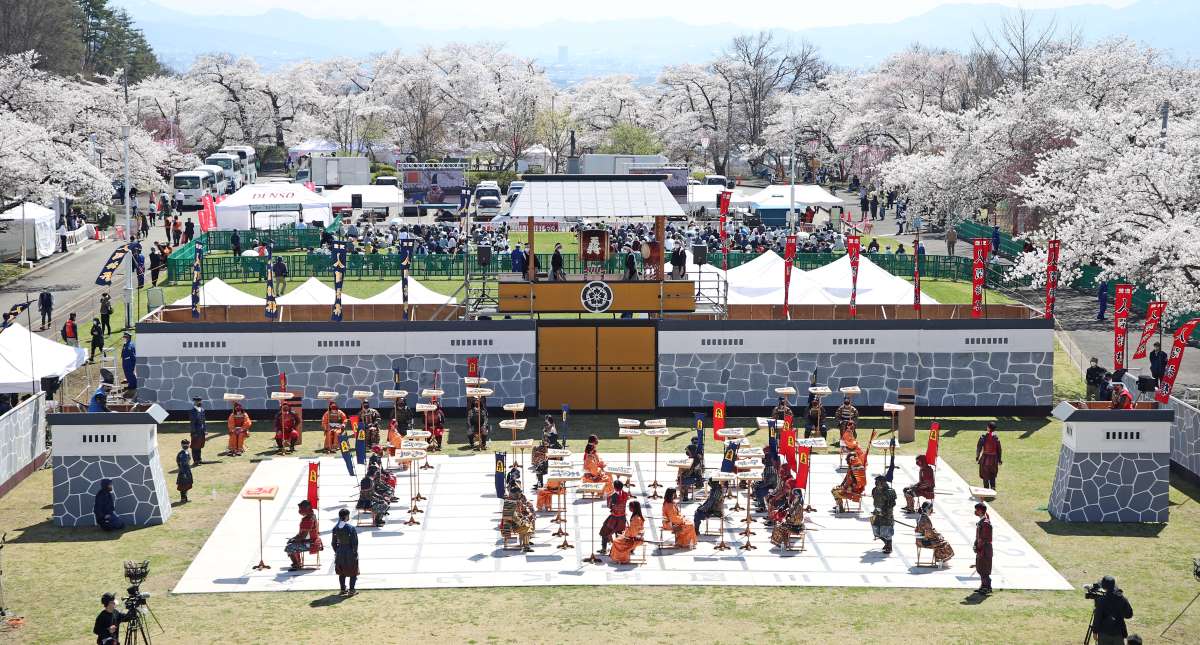 5-crowned Souta Fujii playing in human shogi with rival Daichi Sasaki on April 17, 2022. The game was held for the first time in three years on Mt Maizuru in Tendo City, Yamagata Prefecture (Photo by Takumi Kamoshida).

Tendo City in Yamagata Prefecture has a reputation for shogi, which is sometimes known as Japanese chess. For one thing, it is the largest producer of flat wooden shogi pieces in Japan.

On April 17, the city held its annual spectacle, a human shogi game with forty men and women dressed in traditional kimono, armor, and helmets of the samurai era. Each one played the role of a shogi piece.

Shogi master Sota Fujii, who owns 5 major shogi titles, Osho (king), Ryuo (dragon king), Oi (throne), Eiou (wise king), and Kisei (divine player), faced off in a heated battle against rival Daichi Sasaki, who holds the rank of sixth dan. It was the first time to hold the event in 3 years, following the disruptions caused by the COVID-19 pandemic.

With cherry blossoms in full bloom, the Tendo human shogi game board was set up on a 15-meter square on the top of Mount Maizuru in the city.

The five-titled Fujii started the match, calling out: “Let’s have a fair fight!” There are special rules in Tendo human shogi. Competitors must move each piece at least once during the game, while speaking their moves in the language of samurai.

Early in the game when the pieces were barely moving from their initial positions, Fujii called out an aggressive move. Six-dan Sasaki yelled out to the crowd, “A bit quick, don’t you think?.” Laughter burst out in the audience.

After much effort was exerted in maneuvering all the human pieces, Fujii won the match in the 130th move for checkmate.

The venue is a frequent location for major title matches of the game, as well as home to the annual human shogi match.

After the game, the five-titled Fujii was enthusiastic about the experience, saying, “The cherry blossoms are in full bloom and the weather is fine. It has been a great experience ー I want to come back again for the next title match.”