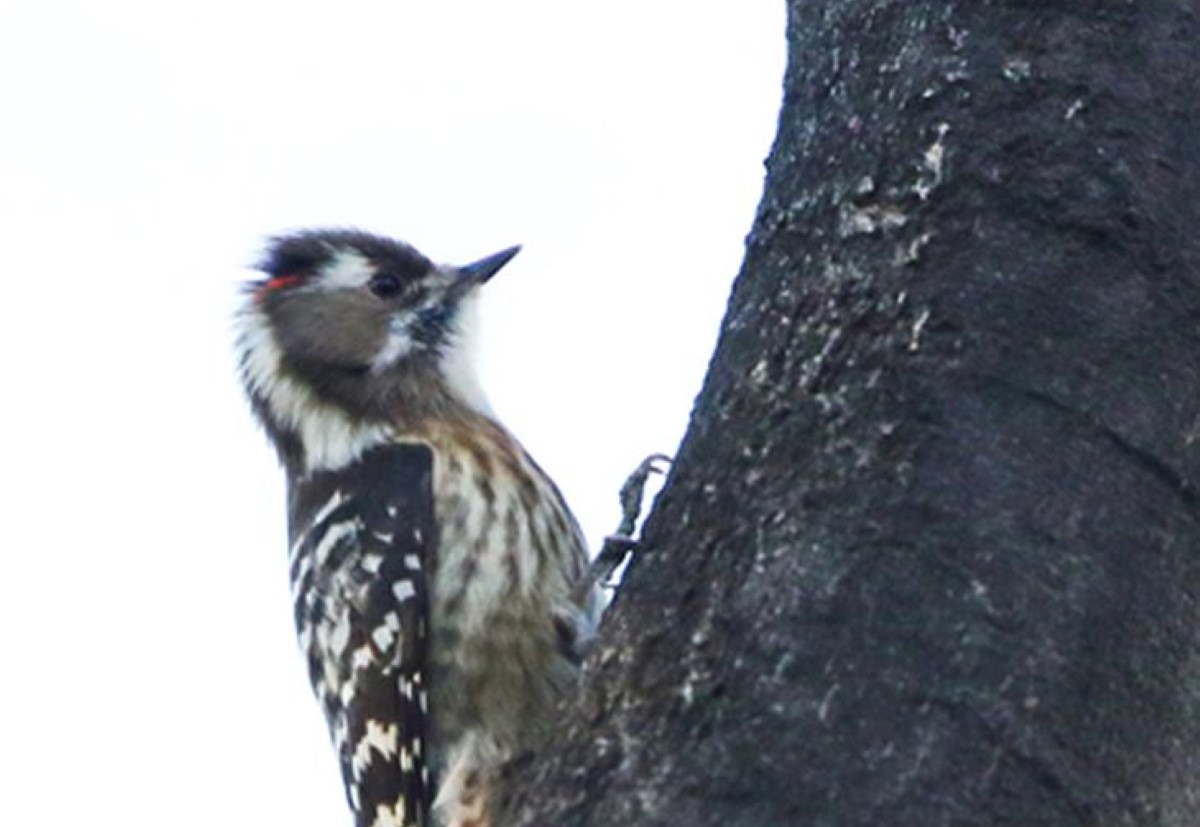 Leaving behind the hustle and bustle of Roppongi Avenue in Tokyo’s lively entertainment district and walking up a little hill, you are suddenly enveloped in a calm and peaceful atmosphere. It is the green space of Ark Hills Sengokuyama Mori Tower, in Tokyo’s central Minato Ward.

Stepping beyond the entrance where the bluebottle butterfly dances and following along the terraced path, you reach a courtyard called the Kogera no Niwa (pygmy woodpeckers garden). Here, the Japanese zelkova (elm-like trees) and camelia grow in abundance, and grasshoppers hover in the shade along the overgrown pathway.

Kawanina, or freshwater snail, are loitering in the waterway, and Orthetrum albisum (white-tailed skimmer, better known as dragonfly)​ rest on perches near the pond.

Here, Japanese pygmy woodpeckers, called kogera, are found together with critters such as lizards, pale thrush, and kuwagatamushi (stag beetles, aka dorcus rectus). They all thrive in the midst of the city in this small, rich ecosystem known as a satoyama, which aims to be the smallest forest environment in Japan where kogera live.

“We aim to create a green city to make people aware of living creatures,” explains Hiroki Yamaguchi, technical advisor to the Mori Building (Minato ward) who supervised the design.

The 1.5 hectare site is an optimal ecosystem habitat for the Japanese pygmy woodpecker.

No effort was spared in designing the space. Kogera search for dead trees, where they find food and material to build their nests, so the designers added more than 40 to attract the birds. They included a place for the birds to find water to drink and bathe their feathers.

A thicket of evergreen suda-jii trees (Castanopsis, a member of the beech family) line the Shinoki (bamboo grass) slope that passes next to the building. “Birds come and rest on the trees along the sidewalk”  notes Yamaguchi, who had the trees planted in a continuum to make it easier for the Japanese pygmy woodpeckers to traverse the broad green spaces scattered around the city center.

There are 36 types of native trees of varying heights and shapes. This three-dimensional effect of the greenery “helps to differentiate the creatures’ habitat,” explained Akihiro Suzuki, a member of the company’s design department who worked with Yamaguchi on the project.

The eco-stack of dried branches on the ground help insects breed, and the cracks in the stone walls allow reptiles like lizards and snakes to slip in and out easily. For each creature, “we are making a comfortable habitat that is yet welcoming to people, and we can intervene when protection is needed,” Suzuki said.

The design is dedicated to creating an environment that finds a balance for humans and other living creatures to coexist in the city.

In 2012, when the green space was completed,  the project became the first in the country to receive the highest level of the Japan Habitat Evaluation and Certification Program (“JHEP Certification”), awarded by the Ecosystem Conservation Society of Japan, for its contribution to conserving biodiversity. The kogera, the target of the project, began to appear in the urban satoyama the following year.

Even now, Japanese pygmy woodpeckers appear often, and 14 species of birds such as the varied tit, and 10 butterfly varieties have also surfaced.

The space is not without problems, however. Dragonflies and frogs which live near the water are being threatened by alien species such as crayfish. According to Kento Hirabayashi of Seibu Landscaping (Toshima Ward in northern Tokyo), which manages the green space, “invasive species are not bad in themselves , but they are harmful to the ecosystem.”

Greening “relieves the city’s burden of development and fosters the importance of living creatures and the natural environment,”  commented Yamaguchi. Interest in biodiversity is growing internationally, as seen in the United Nations’ Fifteenth meeting of the Conference of the Parties on Biological Diversity (CBD COP15) held in October 2021.

Yamaguchi would like the next generation of children to see the city’s green space as one which is full of various forms of life and “recognize that green spaces are alive and that humans are also part of the ecosystem.”

Unlike a well-maintained modern garden, the satoyama where Japanese pygmy woodpeckers live conveys the rich coexistence of creatures, nature, and human activity.