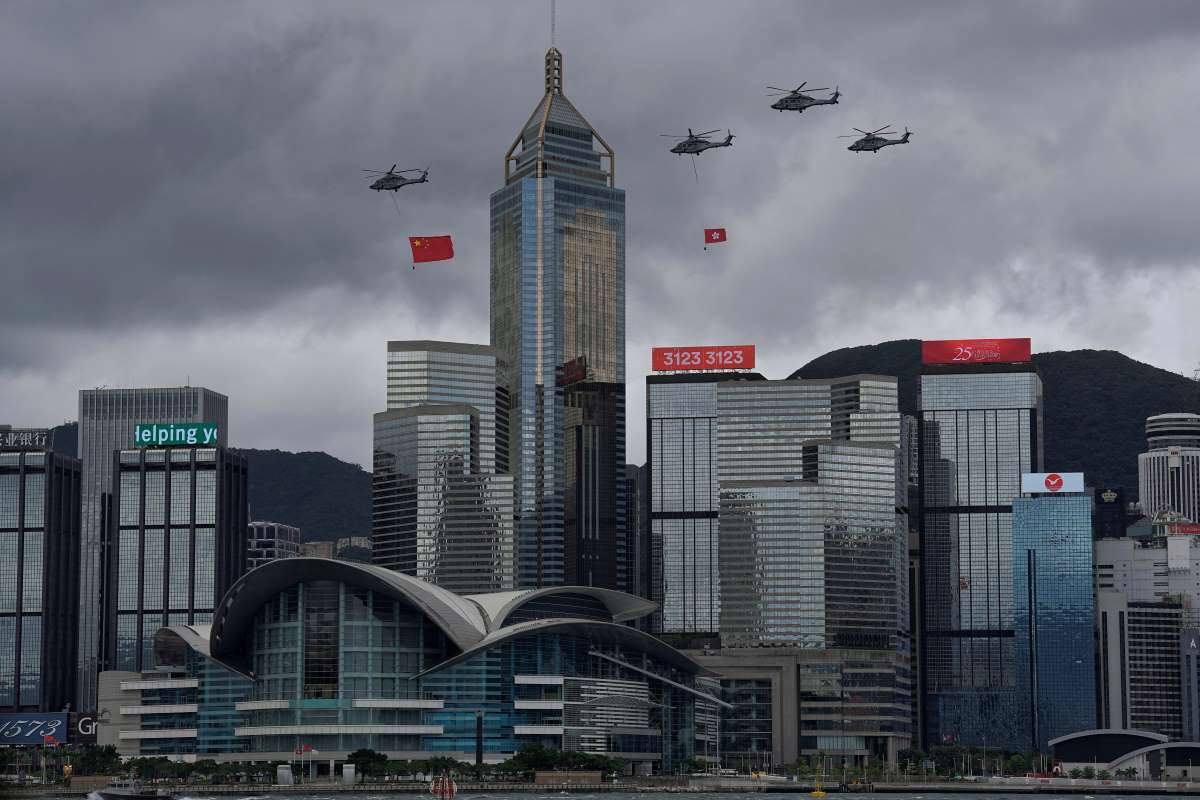 The propaganda department of the Chinese Communist Party has been ordered to present Xi Jinping’s visit to Hong Kong as a glorious success, in which the great leader has been warmly welcomed by citizens waving red flags.

The message is that Beijing now has total control over the city, which is unequivocally part of the People’s Republic of China.

However, a Hong Kong activist called Finn Lau says that in reality, many people are “disgusted and sickened” by this kind of political showmanship.

Mr Lau, who is now in exile, is among the pro-democracy leaders wanted on international arrest warrants.

He spoke at an event held at the British House of Commons in London, organized by the Henry Jackson Society and hosted by Christine Jardine, the Liberal Democrat Member of Parliament for Edinburgh West.

Mr Lau said he is dismayed by the national security law which was imposed on Hong Kong in 2020. He claims that many thousands of people have since been arrested for activities which would not be regarded as crimes in free societies.

According to him, “the Chinese authorities have crushed Hong Kong. They have weaponized the criminal justice system to crack down on political protests and they have put an end to the independent judiciary.”

Finn Lau believes Hong Kong no longer qualifies as an international finance center, but maintains that its loss of status is a price worth paying to prevent the city’s riches going over to China.

“I believe it is time for democratic countries to impose sanctions on the People’s Republic of China. I think the war in Ukraine has shown the high price of relying on an autocratic partner. We need to untie our connections to China, piece by piece,” Mr Lau told a packed committee room in the parliament.

One of Xi Jinping’s key tasks during his trip to Hong Kong was to oversee the inauguration of chief executive John Lee, who is known for his hardline approach against the pro-democracy movement. He is a former police officer and head of the government’s security branch.

The swearing in took place at the Hong Kong Convention and Exhibition Centre, after which cabinet members, as well as Executive Council members, also took the oath of allegiance to Beijing.

Roads around the convention center were closed on Friday and the building was surrounded with two-meter high water-filled barriers, guarded by hundreds of police.

Pro-democracy activists, including members of the League of Social Democrats, said they decided to scrap demonstrations after they were warned by national security authorities.

Several local and international news outlets were banned from covering the inauguration – including Nikkei, Getty and HKFP (Hong Kong Free Press) – while many mainstream outlets faced restrictions on their journalists.

In his speech, Xi Jinping urged all residents to “respect and safeguard the fundamental system of the country.”

He went on to say that political power should only be given to people who love their homeland and that no nation would allow its people to be unpatriotic, or even treasonous.

John Lee said at his inauguration that the enforcement of the national security law has allowed Hong Kong to “return to order from chaos”.

However, Dr Mark L. Clifford, former Editor of the South China Morning Post, says that the imposition of the law has “set in motion a terrible chain of events”.

He cites the example of Jimmy Lai, the founder of the pro-democracy newspaper Apple Daily, which was shut down by the Chinese authorities in 2021. After being arrested and marched through the paper’s newsroom in front of his staff, Mr Lai was sent to jail.

According to Dr Clifford, the person responsible for that miscarriage of justice is the city’s new CEO, John Lee.

Dr Clifford told the meeting in the British parliament that the authorities claimed that by holding up a candle in silent protest, Jimmy Lai committed an act of rebellion, akin to inciting a riot. He said that he would have described Mr Lai’s trial as “a kangaroo court, except that would be unfair to kangaroos.”

“Jimmy Lai is in solitary confinement in a maximum security prison but he’s not a security threat. He is a Roman Catholic and he’s always preached non-violence,” he continued.

To Dr Clifford, it’s another shocking sign that Xi Jinping is imposing a draconian system on Hong Kong, similar to the ones used in Xinjiang and Tibet. He notes that some of the officials now running the city have experience in running Communist systems in other regions of China, where human rights abuses are rife.

Timothy Lee, a councilor who represented a district in Kowloon, says that political opposition has nearly been wiped out in the city. He pointed to attacks on freedom of the press and moves against pressure groups and trades unions, including the main teaching union, HKPTU (Hong Kong Professional Teachers Union).  Civil society has “melted down” as a result, he claims.

Beijing is preparing a totalitarian model for Hong Kong, Timothy Lee believes. He says that the national security law is being strengthened to deter activists from putting up a fight. “This should raise awareness of the threat the PRC system poses to the whole world,” he told the House of Commons.

He said that Japan and its neighbors are waking up to the need to cut off the economic resources of the Chinese Communist Party. “I call upon the world to tighten sanctions,” he said.