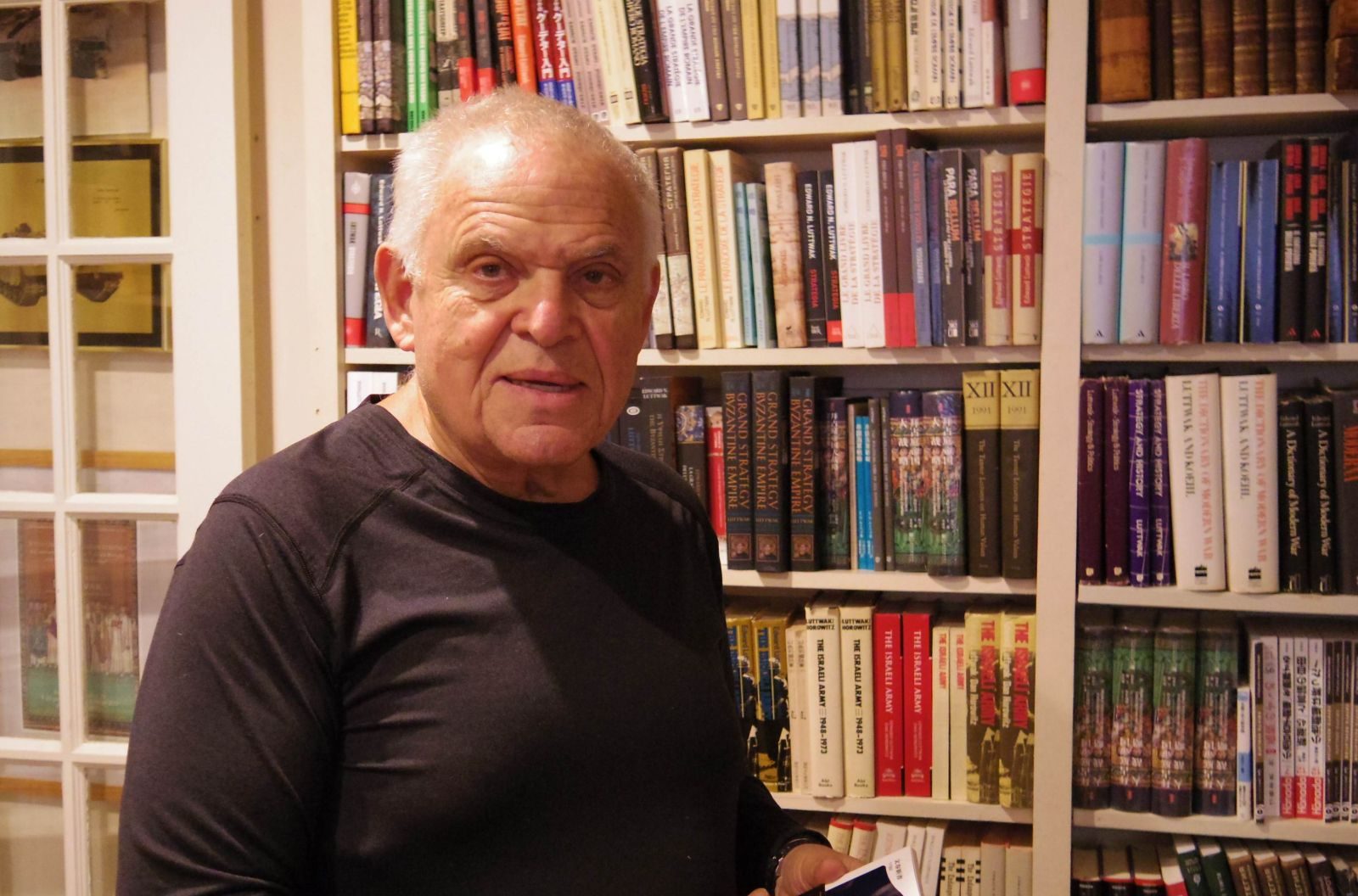 Part 2: China Loses In Its Cold War With the U.S. — Luttwak

In this third installment, Dr. Edward Luttwak says the international positioning between western countries and China has more to do with trade and intellectual property than meaningful militarization.

He explains why Beijing’s military facilities on coral atolls in the South China Sea are only symbolic — not a meaningful military strategy — as the outposts can be blown away in five minutes if a military altercation occurs.

At the same time, he warns that Western countries do not yet have the necessary mentality to counter China’s widespread espionage to steal advanced technologies. The result is a developing Cold War.

The following are excerpts from the interview done by Yoshinari Kurose, Washington correspondent for The Sankei Shimbun and JAPAN Forward in late December 2018.

Would China get out of the South China Sea?

The United States under Trump has started the pushback in the South China Sea. The Chinese claim of sovereignty has been comprehensively refuted, has been ridiculed actually.

The Chinese do not have sovereignty at all. The Americans fly over them, sail in there, and other countries do too. And Japan also will have to do this.

But would they abandon their military installations?

Well, you see, there is a complication. When you do a freedom of navigation operation, you are doing a symbolic action.

But in this case, remember, the [Chinese] military installation itself is symbolic. No practical military person would ever put valuable weapons on coral reefs in the middle of the sea where they cannot be protected by any means.

From a military point of view, these bases are not serious. This is theater. These are Beijing opera bases.

And if they ever tried to use those bases to stop navigation, then they would be immediately challenged. They would be in a situation where very fragile bases are vulnerable.

They are outposts, unprotected outposts, so they are very good for symbolic purposes. But it also means that if you fly over them and sail between them, you are negating their only value, which is symbolic.

Quite interesting because I thought that those bases are indeed equipped with anti-air missiles.

Yes, they can have all the missiles they want, but they are exposed.

Let’s say there was any kind of fighting, okay? Then any one of the four American guided missile submarines has enough missiles aboard to destroy all those bases in one strike. Non-nuclear.

I am talking about the famous four nuclear-powered ballistic missile submarines converted to cruise missiles, which have non-nuclear missiles. Each carries 62 missiles, plenty to knock out all of these bases in about five minutes.

You don’t put valuable weapons in an isolated outpost. It doesn’t serve any purpose.

What you can do in an outpost are things like putting in radar. Observation, you can do. But their militarization is symbolic.

Then is this an economic confrontation?

It cannot be solved in a military confrontation because these are nuclear powers so there is no room for military action. There is only symbolism.

What about the espionage war?

The real action is geo-economic and technological competition. And there the coalition has further allies.

For example, in Europe, the Chinese can no longer go and acquire technology companies. Until a few years ago, maybe even a year ago, the Chinese could go and buy a German company, French, Italian, whatever, and bring the technology back to China.

They can’t anymore. There is now careful observation, they need approval to buy it, and the approval is denied.

However, this is also a race between research and development in the United States and Britain, which is important. In information technology, the British definitely are the second most important after America.

It is a race between our research and development advances and Chinese espionage.

Until very recently, the Chinese had a free ride. There was some resistance, some security, there were some cases, but now in that world of technological espionage, it’s all-out war.

This is part of the secret world. What happens in the secret world is not necessarily very important, but it does tell you the real relations between countries. This can only really be determined by what the spies on each side are doing.

For example, Saudi Arabia is officially in a state of war with Israel, but the intelligence cooperation is full. That is the real relationship between Saudi Arabia and Israel.

There were security cases and espionage cases before. But it is only since Trump that the all-out war has started.

As far as I know, Americans are not trying to steal Chinese technology.

Maybe because they are not worth it?

Actually, the Chinese do have some technology worth stealing, but even in those cases, we don’t steal it – because we are lacking in appreciation.

We know that the Americans failed to steal technology from the Soviet Union when it was more advanced because they were contemptuous. I am talking here about the most important single advance in air-to-air technology, which is the helmet-mounted display and the Soviet Air Force had it before the American Air Force.

The MIG-29 with helmet-mounted display system fell into the German Air Force hands when East Germany collapsed. They immediately saw that the MIG-29 could outmaneuver and shoot down any Western aircraft. But even when the U.S. Air Force went to examine the aircraft, they said, “Oh, the plane is not beautiful, and the radar is not bright.” They missed the fact that there was a helmet-mounted display with which you could shoot down the other planes.

So, the people who developed that were the Israelis — on the basis that they took the Russians very seriously indeed. They were very concerned that they would be fighting the MIG-29 in Syria and they saw it as a superior system, so they copied it.

What about security mentality?

We have to remember this lesson, which is the Chinese are spying very actively and we are failing in two ways.

First, we are not spying on them, which is a big mistake because, by the way, it is only if you spy on Chinese technology companies that you detect what they have stolen. You see something arriving and then you know they stole something from the West.

The second thing is a very slow security reaction to their spying.

As we speak, there are hundreds of Chinese citizens in Google. Then, there are much bigger numbers of American-born Chinese, many of whom have connections with China.

And we have a phenomenon like Microsoft, which has an advanced research center in Beijing. And who do you think works there? It’s not Brazilians or Portuguese. It’s Chinese citizens.

So, if this is going to be a technology race, what does it mean to operate a Microsoft advanced research center in Beijing? It means that whatever you do, you are giving to the Chinese.

If this is going to be a geo-technological competition, which is what it appears to be, you have to remember that what you achieve by R&D, it is very hard to race ahead of their espionage. They cannot overtake, but they can be right behind.

So, you make a big effort to develop technology, they make a much cheaper effort to steal it.

Just remember that last year, Google employees voted and pressed and lobbied and said Google should not cooperate with the Pentagon.

An American company in the United States says, “We will not cooperate with the Pentagon.” But they are cooperating with China.

That’s correct. In other words, we are engaged in a confrontation, but we are in the very early stage of it and the mentality hasn’t arrived.

This is like the Cold War in 1946. In 1946, Winston Churchill went to America and said an Iron Curtain has descended in Europe and we have to oppose the Soviet Union.

Everybody shouted at Churchill that he was a warmonger and Russia is our ally, the Soviet Union was our brave ally, Stalin was our great ally.

It took several years. We are at this early stage, with lack of awareness of what the geo-technological competition means.

It means no Microsoft in Beijing and it means real security in the United States.

This is a serious thing, but it is just beginning to happen. Just now, elementary things like, for example, the Indian government is still relying on Huawei switchgear.

Huawei has been excluded from U.S. telecom for many years. Exclusion from other places hasn’t even happened. The British are just now deinstalling Huawei’s switchgear from the British telecom system.

So, in other words, we are in the early stages of a confrontation and the mentality is not ready.

Click these links for Part 1, Part 2 and Part 4 of this series.