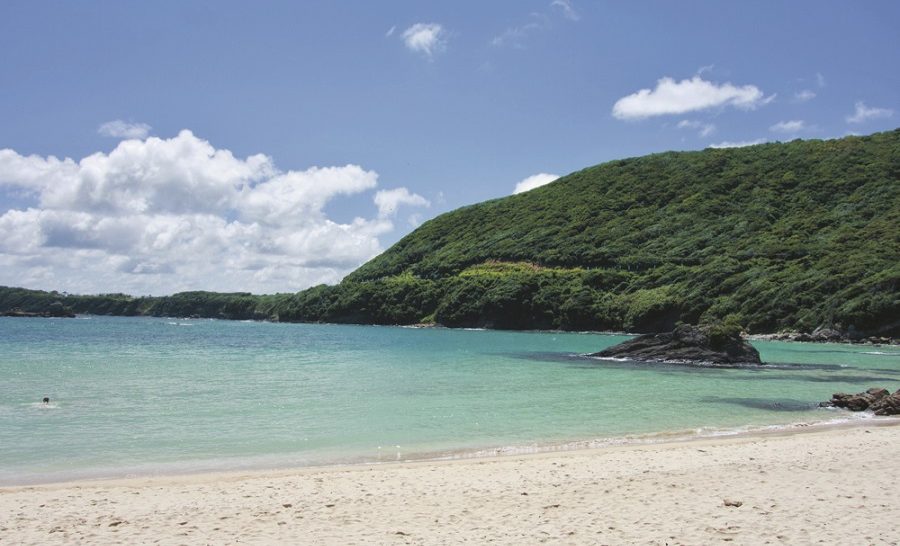 While Tsushima garners attention for its ocean garbage, not all of the islands’ shores are covered with trash. The beauty of Miudahama Beach is a powerful symbol raising awareness of the problem and spurring action.

Visit Tsushima and Save its Pristine Shore from Plastic Waste 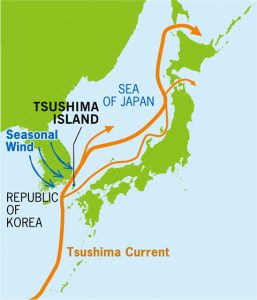 Situated in the Sea of Japan and wedged between the Kyushu region of southwestern Japan and the Korean Peninsula, Tsushima is a group of islands with a resident population of 30,000 people. The blue, clear ocean waters encircling Tsushima are a popular spot for fishing and marine sports, while on the northern shore lies one of the best beaches in Japan, Miudahama, which has natural white sand. It is an idyllic place, with rich fishing grounds thanks to the Tsushima Current, mountains that enfold the scenery with signs of the seasons, and a lifestyle that has shown respect to nature for generations. The beautiful islands and shores are sights that few have yet seen, but hopefully more people will come to witness them. 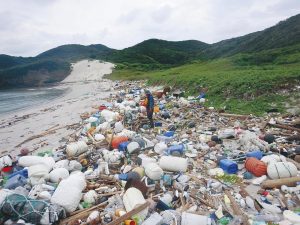 So much garbage drifts ashore that it buries the coastline. In addition to the high cost of collecting the trash, there are concerns about damage to ecosystems and the rest of the coastal environment, as well as the impact on the fishing industry. 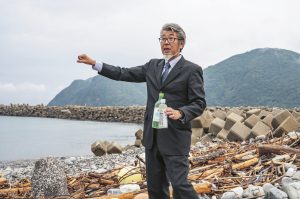 Suenaga was born and raised in Tsushima. Presently, he is working on organizing talks on the islands and beyond to inform audiences about Tsushima’s ocean garbage problem.

Ocean garbage, a serious problem worldwide, is now causing concern here in Tsushima. At the G20 Summit in June 2019, countries agreed to swiftly take action both nationally and internationally, in partnership with relevant stakeholders, to prevent and significantly reduce discharges of plastic litter and microplastics to the oceans. In addition, the “Osaka Blue Ocean Vision,” which aims to reduce additional pollution by marine plastic litter to zero by 2050, was shared.

SUENAGA Michinao, the director of Tsushima CAPPA, a general incorporated association that collects and publicizes information about the islands’ efforts to combat marine debris, said, “There wasn’t this much garbage when I was a kid. It’s changed in the past 10 years or so. I’m at a loss because no matter how much we collect, we can’t keep up.”

Trash brought over by seasonal winds and ocean currents piles up on the western shore of Tsushima, stacking up two or three layers deep. Plastic bottles and other containers stand out, mixed in among the large pieces of polystyrene flotation devices and floating pieces of hard plastic, along with fishing nets and other fishing gear. Furthermore, there are gas canisters and plastic containers containing hazardous chemicals, as well as medical waste such as needles and ampules. Those items pose a danger that complicates collection efforts. On top of that, even if the shore is cleaned up once, in about half a year, around the same amount of garbage floats in to replace it. 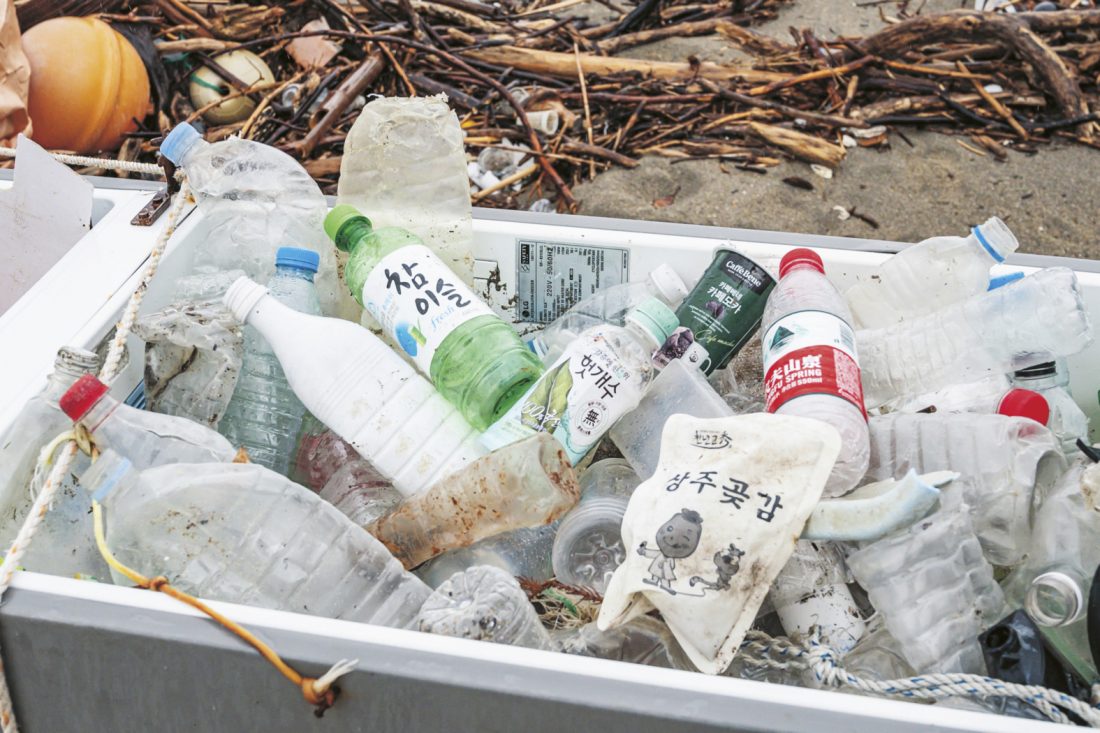 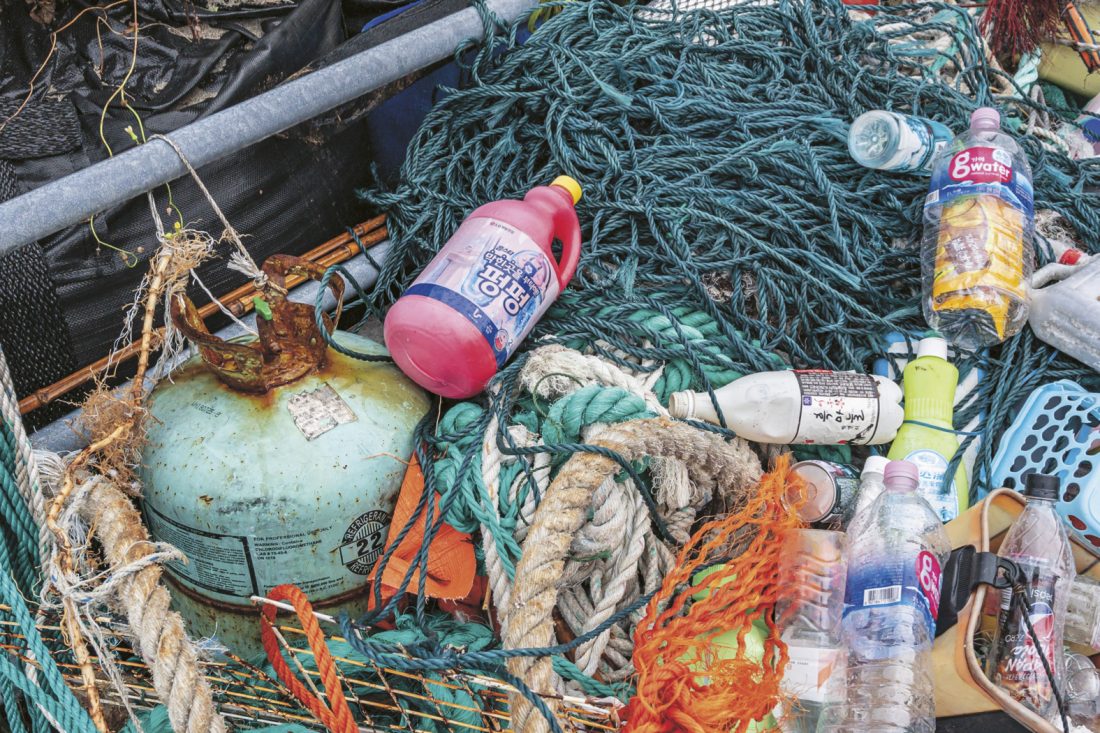 Much of the household garbage dumped into the sea in nearby countries floats over to Tsushima.

A survey conducted by the City of Tsushima estimated that the volume of garbage floating to the islands each year amounts to 18,000m3. Of that, plastics of all types, including PET bottles and polystyrene, account for over 50% of the total. When the surveyors checked the garbage’s countries of origin on labels, barcodes and elsewhere, they learned that approximately 85% of the plastic bottles drifted over from neighboring countries.  This is a serious problem that not even Japan, let alone Tsushima, can resolve. 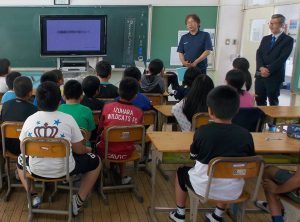 Tsushima CAPPA continues to raise awareness among children to encourage them to think about the problem of ocean garbage.

Tsushima CAPPA is engaged in various activities. They include organizing a collection routine by the fishing cooperative and teaching children at elementary and junior high schools on the islands about the current situation. According to Tsushima CAPPA, Japanese companies have recently been providing more opportunities for employees to visit the islands and clean up the marine debris as part of their training.

Suenaga said, “What we really want to do is tell people more about Tsushima’s appeal, but at present, I think it’s important to publicize what’s happening now on the islands and inform people of it.”

While awareness of the issue grows, the people who love Tsushima carry on their fight as they deal with the frustration that there are no signs that the countries producing the garbage will take action.