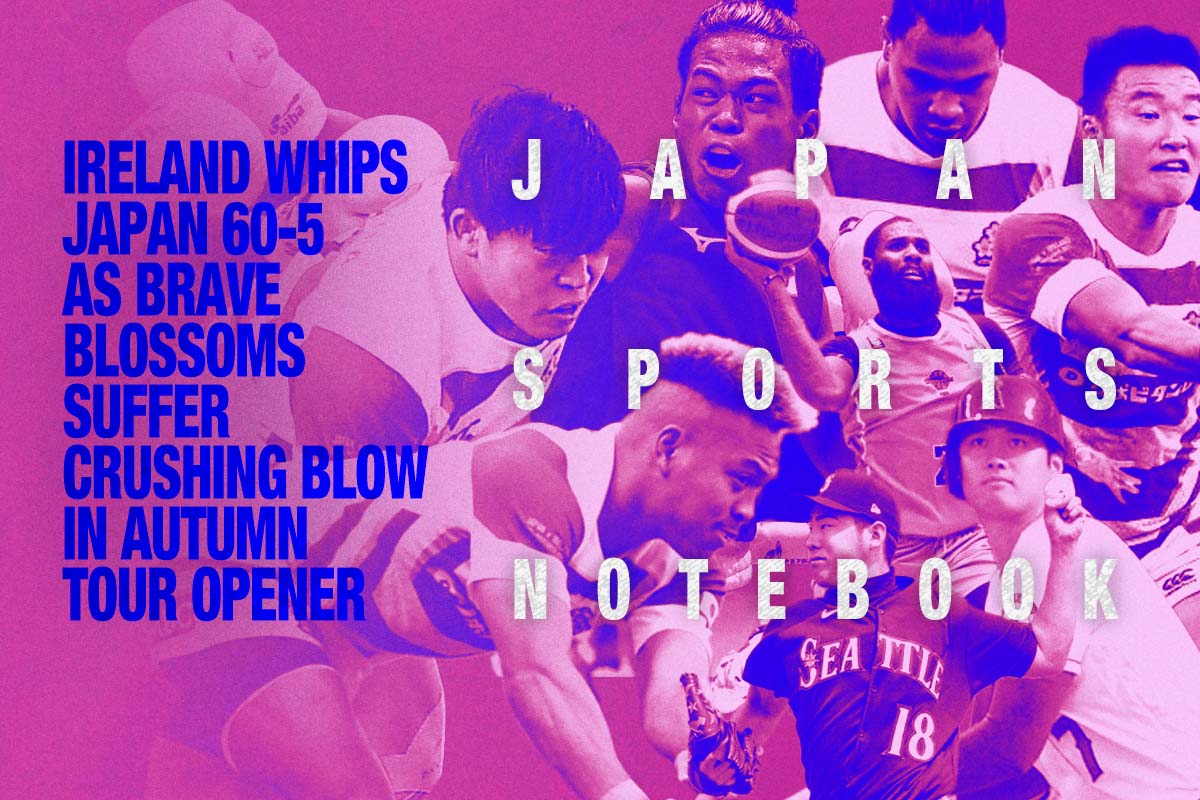 The past and the present collided in Dublin on Saturday, November 6.

Returning to the spotlight for the first of three autumn tests on its European tour, Japan faced a tradition-rich Ireland squad that reminded Joseph the Brave Blossoms’ success two years ago means little at the present time. The hosts hammered Japan 60-5, with Andrew Conway producing three of Ireland’s nine tries in the comprehensive beatdown at Aviva Stadium.

The Brave Blossoms faced a 29-0 deficit at halftime.

"The Irish national team was great, and I think the 100-cap Sexton is a great player,” Joseph said after the match. “Due to the pandemic, there aren't many matches and Japan's preparations for the next World Cup are certainly delayed. This delay must be regained as a team. The difficult conditions are the same for any rugby union. We were able to fight a very strong Irish national team this time and continue to do what we can and what I should do as a head coach.”

Joseph added that defensive mistakes were a factor for his club.

“Two things stand out: Our defense was outstanding,” Farrell said, according to The Associated Press. “We didn’t have to do much but there was a reason for that, we put pressure on Japan and they spilled the ball a bit. And our set-piece got on top of them.”

The Brave Blossoms have little time to dwell on the disappointment of their lopsided loss to Ireland. They face Portugal on Saturday, November 13, and Ireland will play New Zealand on the same day.

Saso, who was born in the Philippines, is a dual citizen. Her father is Japanese. The 20-year-old was raised in both countries, but represented the Philippines in the Tokyo Olympics this summer.

Japanese law requires dual citizens to select one country they will be citizens of before their 22nd birthday.

Saso made the announcement a day before the Toto Japan Classic got underway in Otsu, Shiga Prefecture.

Nakajima, the world’s top-ranked amateur player, is the third Japanese golfer to win the event. The others: Takumi Kanaya (2018) and Hideki Matsuyama (2010 and 2011).

“I am very proud of what I have achieved. To follow in the footsteps of Hideki-san and Takumi feels great,” Nakajima said at Dubai Creek Golf and Yacht Club.

Japan is in fourth place, trailing Saudi Arabia, Australia and Oman in Asian Group B qualifying for the 2022 World Cup, and Moriyasu spoke about the team’s sense of urgency as it approached matches against Vietnam and Oman.

"I'm aware that we're in a very difficult situation," Moriyasu was quoted as saying by Agence France-Presse. "We have our backs to the wall and we have to give everything to give everything to take as many points from our last six games as possible. I strongly believe we can qualify for the World Cup."

After a banner season in the Japan Football League, Iwaki FC has secured promotion to J3, the third tier of Japanese professional soccer under the J. League pyramid.

Iwaki FC, established in 2012, has climbed the soccer ladder since its first match in 2013.

The Tohoku-based club got its start in the Fukushima Prefectural Football League (2013-17, with league titles in its final three seasons in the third, second and first divisions, respectively). Iwaki FC then competed in the Tohoku Soccer League in 2018-19, with more success, winning titles in the second division (South) and top division. That earned the club a spot in the JFL in 2020.

Yuzo Tamura has served as Iwaki FC manager since 2017.

It has been a disappointing season for FC Cincinnati.

With four wins, 21 defeats and eight draws entering the club's final match of the season, FC Cincinnati had the worst record among Major League Soccer's 27 teams.

In the 2020 season, Kubo appeared in 19 games and scored three goals.

The 27-year-old Kubo began his pro career with the J. League's Kyoto Sanga F.C. in 2011. The Yamaguchi native has 13 career caps for the Japan senior national team.

Setting the Pace in the WE League

In the inaugural WE League season, one of 11 teams had a perfect record through six matches. That distinction belongs to INAC Kobe Leonessa.

Coach Kei Hoshikawa's club has six wins in as many games, while the Mynavi Sendai Ladies were also unbeaten (three wins and three draws) entering the next round of play on November 6-7.

Okazawa, who competed at the Tokyo Olympics, sustained a left shoulder injury in the semifinals but overcame the pain to achieve his goal.

“I just thought I had to believe in myself. I'd have lost if there'd been a doubt," the 25-year-old Okazawa told reporters after the final, Kyodo News reported.

Tsuboi said his next goal is to win a gold medal at the 2024 Paris Olympics.

Okazawa and Tsuboi became the first Japanese fighters to earn titles at the world championships, which began in 1974. Middleweight Ryota Murata, the 2012 London Olympic gold medalist, was the runner-up at the 2011 world championships.

Southpaw starter Yusei Kikuchi is a free agent after a three-year stint with the Seattle Mariners.

The American League club declined its contract option on him (four years for $66 million USD) through 2025, it was announced on Wednesday, November 3.

Kikuchi had a player option for 2022 ($13 million USD), but after the team's plans were revealed, the former Saitama Seibu Lions pitcher opted to test the free agent waters.

There is some speculation that the 30-year-old will return to NPB next season.

This past season began on a positive note for Kikuchi, who was 6-4 with a 3.48 ERA before the All-Star break in July.

Kikuchi lost his spot in the starting rotation in late September. In his final 13 pitching appearances of 2021, the lefty went 1-5 with a 5.98 ERA.

Mariners manager Scott Servais said he believes the team made the right decision to demote Kikuchi before parting ways with him.

“Not the way I think anybody envisioned the season ending for him, certainly with the way it started,” Servais was quoted as saying by The Associated Press after the Mariners season ended. "But you have to make adjustments, you have to do what’s best for the team and at the time, I thought that was the best thing for the team.”

Hiroshima Carp outfielder Seiya Suzuki will be posted, giving MLB teams a chance to negotiate a contract with him in the offseason, MLB.com reported on Friday, November 5.

A Look Ahead to the MVP Announcements

The American League and National League MVP award winners will be announced on November 18.

Los Angeles Angels slugger/pitcher Shohei Ohtani is the favorite, with Vladimir Guerrero Jr. of the Toronto Blue Jays is considered another top candidate.

Naomi Osaka is working on her tennis game after a self-imposed break after her third-round defeat at the U.S. Open in September.

The four-time Grand Slam singles champion informed her legions of social media followers on November 5 that she’s back on the tennis courts.

“Kinda rusty but feels good to be back,” Osaka wrote on Twitter. “I really want to say thank you everyone for all the kind messages, I really appreciate it.”

Through the end of October, the first month of the 2021-22 B. League season, Reynaldo Garcia of the Saga Ballooners was the top scorer among the 36 teams in the first and second division.

The 31-year-old Cuban point guard is averaging 26.5 points along with 7.3 rebounds, 4.4 assists and 3.5 steals in eight games. Garcia had a season-high 34 points against the Kumamoto Volters, a second-division rival, on October 16.

In the B. League first division, Gunma Crane Thunders standout Trey McKinney-Jones is No. 1 in scoring (22.6 ppg).

More than 9,400 runners participated in the seventh edition of the event, which was canceled last year due to the pandemic.

Explaining his aggressive racing strategy after crossing the finish line, Ushiyama said a fast start was a key to his winning performance.

"If you attack halfway [through the race, you lose. I was prepared to collapse," he was quoted as saying by The Chunichi Shimbun.

“If you round it up, I’m already ‘around 30.’ There are many of my juniors whose names I don’t know. I want to influence them. I want to teach them many things.”

ーSki jumping star Sara Takanashi, 25, on being a role model for the younger generation.

ーJapan Football Association President Kozo Tashima was quoted as saying by Kyodo News in a straightforward rejection of FIFA's proposal to hold the World Cup every two years instead of once every four.