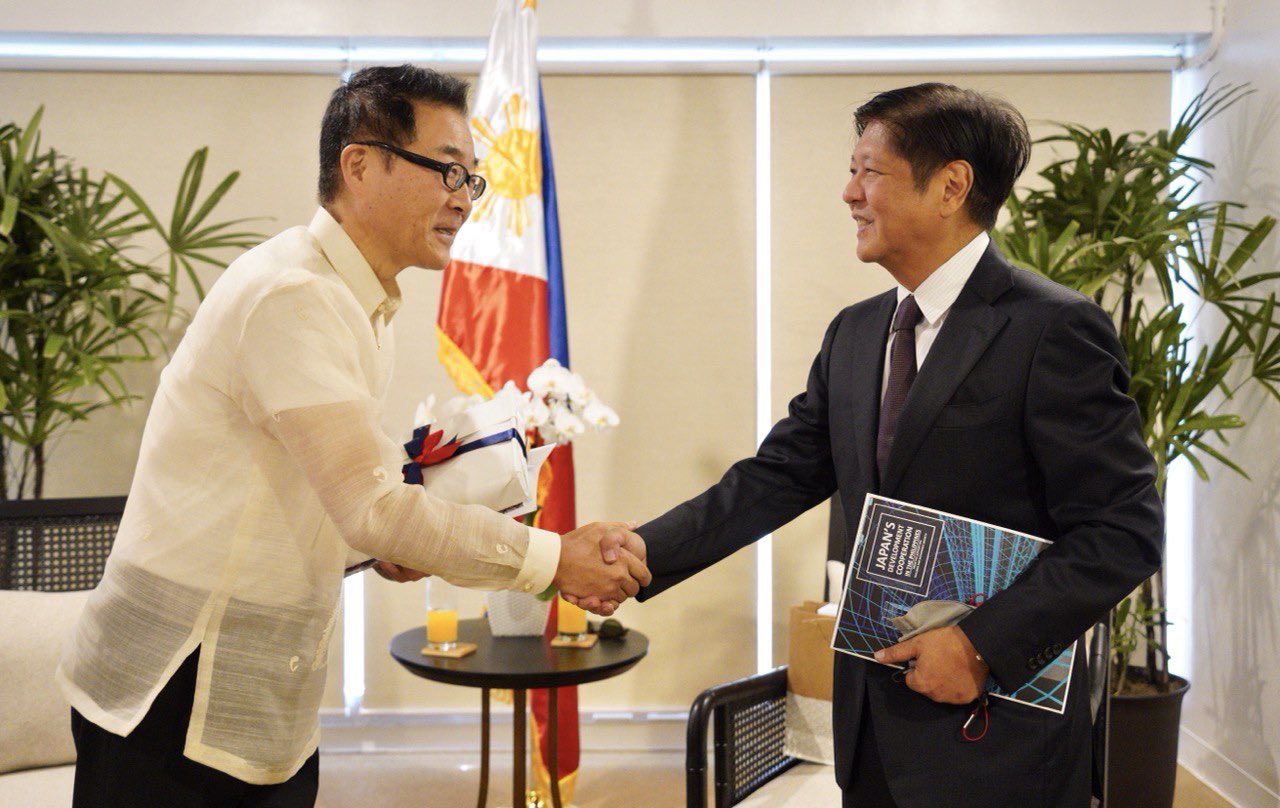 Koshikawa came to Marcos’s campaign headquarters- turned- transition office with two other ambassadors — those of South Korea and India — and the chargé d’affaires of the United States embassy.

In a press briefing after the meeting, Marcos said that, in his individual discussions with the envoys, they agreed that “the survival and stability of the global economy, even just the regional economy, is going to depend on the partnerships we make with the other countries.”

He added, “We have to open as much of the economy as we can to trade.”

Koshikawa, he said, spoke about projects that could be pursued via official development assistance through the Japan International Cooperation Agency (JICA).

“He showed us many possibilities in terms of…transportation infrastructure…and also employment,” Marcos said. “Japan would like to see an increase in the employment of Filipinos in Japan. So we will pursue those opportunities.”

Later on Monday, Marcos tweeted about his “fruitful discussion” with Koshikawa:

Marcos, son of the dictator Ferdinand Marcos who was deposed through a people power revolt 36 years ago, won by a landslide in the recently concluded presidential election. His running mate Sara, daughter of the outgoing President Rodrigo Duterte, also won with an overwhelming lead.

The presumptive president, once officially proclaimed in the coming days, will assume office midday on June 30 for a six-year term.

He inherits from the outgoing government the enormous task of rebuilding the economy, with debts having piled up as a means to finance pandemic response in the past two years. At the media briefing Monday, he mentioned that his administration could only have a better handle of the finances for projects once the national budget for 2023 is passed.

On May 20, Japanese Prime Minister Fumio Kishida spoke on the telephone with Marcos to congratulate him – the third head of government to do so after United States President Joe Biden and Chinese President Xi Jinping.

“Prime Minister Kishida expressed his resolve to continue cooperation on the economic front, such as infrastructure development…as well as in the security and coast guard law enforcement fields…among others,” a statement from the Japanese embassy said.

“In response, President-elect Marcos stated that the relations with Japan are of utmost importance to the Philippines, and communicated his intention to deepen cooperation with Prime Minister Kishida in a wide range of areas,” it continued.

The two leaders agreed to hold an in-person meeting as soon as possible.

As of December 2020, JICA has 79 ongoing projects across the Philippines, grouped into eight types:

After the Marcoses and their cronies were ousted in 1986, official documents surfaced, revealing that during the dictatorship of the father Marcos, he and his associates had received commissions from loans that were meant to fund Japanese projects in the Philippines. Lessons from the scandal became a factor in the passage of Japan’s ODA Charter in 1992.