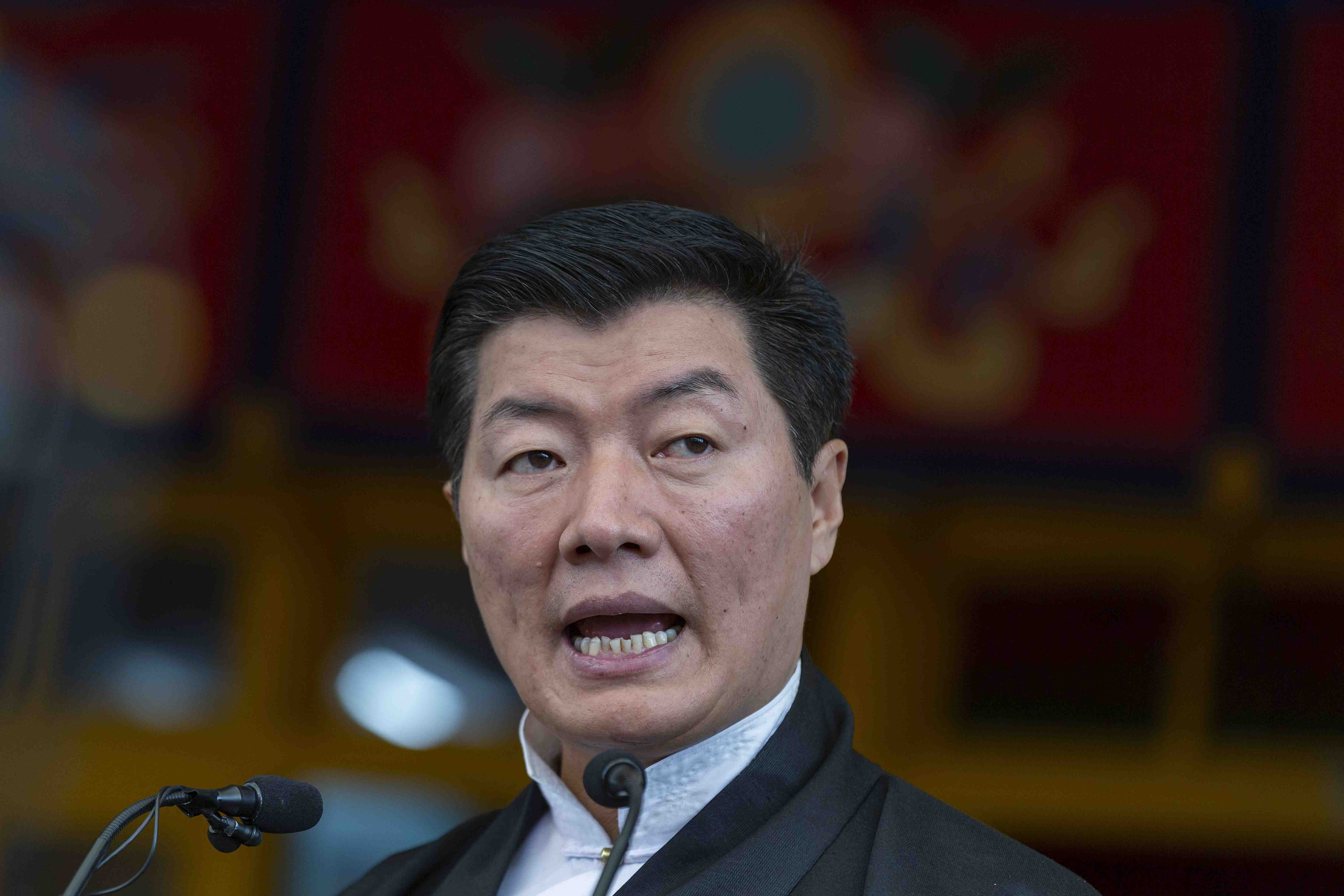 Lobsang Sangay, the president of the Central Tibetan Administration, speaks during a gathering to mark the anniversary of the 1959 Tibetan uprising in Lhasa, in Dharmsala, India, Tuesday, March 10, 2020. Hundreds of Tibetans had staged a protest in 1959 in the Tibetan capital Lhasa against China's rule. (AP Photo/Ashwini Bhatia)

The six million Tibetans suffering Beijing’s relentless repression inside Tibet, and the Tibetans living in forced exile in India and across the world, led by His Holiness, the Dalai Lama, have had but scant hope for preserving their identity.

Yet, the most recent illustration of political support from one of the world’s leading free democracies lends a measure of optimism. It comes in form of the April 27, 2021, virtual meeting between the All-Party Japanese Parliamentary Support Group for Tibet, which reports say congratulated the Central Tibetan Administration (CTA) president, Lobsang Sangay, on the completion of his two-year tenure as Sikyong. Japan’s 98-strong group pledged continued support for the unpromising, yet spirited, struggle for Tibet and Tibetans.

Japan’s All-Party Parliamentary Support Group comprises members of most parties of both the upper and lower houses of the Japanese parliament. Among its members are former Prime Minister Shinzo Abe, Vice Defense Minister Yasuhide Nakayama, and former Education Minister Hakubun Shimomura, who is also the chairman of the group.

Since 1959, when the Dalai Lama was forced out of his homeland in Lhasa, the northern Indian hillside town Dharamshala, surrounded by lush cedar forests on the edge of the Himalayas, has hosted The Dalai Lama and the Tibetan government-in-exile.

The idea to launch Japan’s Parliamentary Support Group for Tibet sprouted around 10 years ago, when Abe and Hakubun met the Dalai Lama in Dharamshala, along with other Japanese lawmakers. They were accompanied by Yoshiko Sakurai, president of Japan’s leading public and foreign policy think tank, Japan Institute for National Fundamentals, who was instrumental in setting up that meeting.

Subsequently, the All-Party Parliamentary Group for Tibet was formed in December 2016, constituting members across Japan’s political party lines. The primary objective of the Parliamentary Support Group remains to support the Tibetan cause. The group has evolved to become the world’s largest parliamentary support group for Tibet, offering support and assistance through Japan’s Official Development Assistance program.

“[It is] a message that human rights are fundamental, and democracy is universal. These values are in contrast with what China says is ‘socialism with Chinese’ characteristics,” Sangay said.

He highlighted the plight of Tibet under the tyrannical rule of Communist China, where “monasteries are being demolished, Tibetan language is discouraged, and more than half a million Tibetans are uprooted from the nomadic areas and put in labor camp-like situations to assimilate Tibet into China.”

These views have been echoed in the 2020 Tibet report by Freedom House, which highlights how ethnic Tibetans are denied fundamental rights, with the authorities being especially rigorous in suppressing any signs of dissent, including manifestations of uniquely Tibetan religious beliefs and cultural identity. State policies encourage migration of Han Chinese from other parts of China, thereby reducing the ethnic Tibetan share of the restive province’s population.

In autumn 2020, the Sankei Shimbun reported that representative members of ethnic minorities from China, who have been living in Japan, met Japanese lawmakers at the National Diet in Tokyo. During the meeting, they described Beijing’s “assimilation” policies and other authoritarian measures, which they alleged were tantamount to cultural genocide.

The group requested Japan’s National Diet members to highlight China’s blatant disregard for basic human rights. The meeting was part of the joint protest activities organized by Tibet’s support organizations, which carried out protests in 36 countries to mark China’s National Day. A protest against the communist regime in China was carried out in Tokyo on October 3, 2020, in the city’s landmark commercial district of Ginza, near the Imperial Palace.

Coupled with the much-needed and continuing support from Japan, another major encouragement for Tibet and its diaspora residing globally has been the Tibetan Policy and Support Act of 2020 (TPSA) passed unanimously by the United States Congress on December 22, 2020. The bipartisan legislation calls for the establishment of a U.S. consulate in Tibet’s capital city, Lhasa, and commends the Dalai Lama for his decision to implement democratic governance. It applauds the exiled Tibetan community for having successfully adopted a system of self-governance to choose their present and future leadership.

The contest between China’s “peoples” with their “freedom to practice religion” and Beijing’s violent state power seems unending. Socio-political subjugation and demonstration of socio-economic change under duress is a bitter reality that Tibet has learned to bear.

Any potential move that would likely threaten the political authority or legitimacy of China’s Community Party will continue to be treated with an iron fist, resulting in human rights violations, the magnitude and intensity of which cannot be fathomed.

Japan, with deep roots connecting it to Buddhism, owes it to Tibet to be the latter’s life raft helping it remain afloat. In the meantime, we can all hope to see Tibetans once again experience autonomy for their homeland, called the Tibet Autonomous Region.