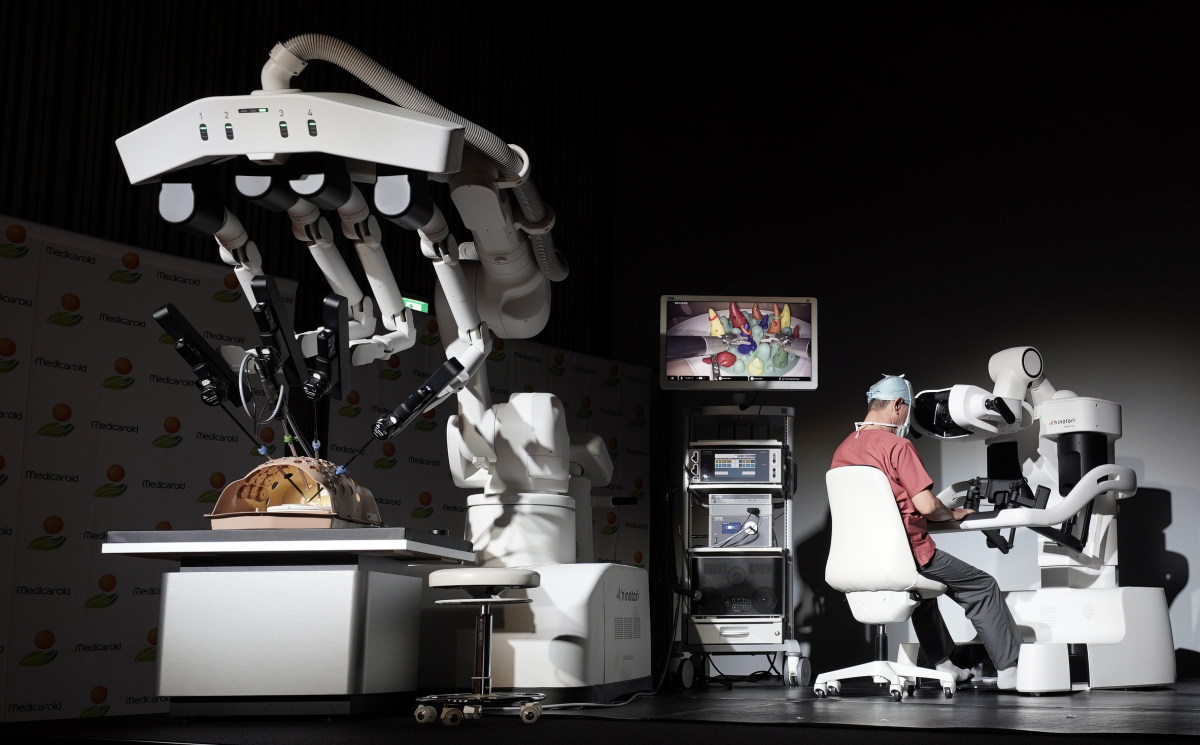 Amid rapidly progressing automation in surgical operations, the first domestically produced surgical robot has been introduced. "Hinotori," developed by Medicaroid Corporation, is expected to cut into a market that has been nearly monopolized by foreign companies up to now.

The new surgical robot was approved for manufacture and sale in Japan in August 2020. More recently, in December 2022 additional robotic surgical procedures were approved for insurance coverage. Then, on January 10, 2023 hinotori was awarded the Prime Minister's Prize related to the Ministry of Economy, Trade and Industry.

The robot is equipped with four robotic arms to replace the surgeon, who operates the robotic arms from a remote location. The surgeon then conducts the procedure while confirming with detailed 3D stereoscopic images.

Development of hinotori began in 2015 by Medicaroid, a joint venture between Kawasaki Heavy Industries and Sysmex Corporation. Kawasaki is the industry pioneer that developed Japan's first industrial robot, and Sysmex is a leader in medical testing and diagnostic technology. Hinotori takes advantage of the technological capabilities of both.

Robotic surgery is expanding to an increasing number of medical departments, such as urology, gastrointestinal surgery, and gynecology. Including university hospitals, 28 Japanese medical facilities had introduced the robot as of June 2022. Six months later by December 15, 2022, 840 surgeries had been conducted with hinotori.

From 1999 through 2022, the da Vinci Surgical System (hereafter referred to as da Vinci), manufactured by the United States company Intuitive Surgical, Inc., nearly monopolized the market for surgical robots. However, their patent expired in 2019 and many companies have entered the market since.

Hinotori is smaller and cheaper ー starting at about ￥200 million JPY ($1.56 million USD) ー and it's gaining momentum. Medicaroid estimated in June 2022 that it would have about 20% of the domestic share within two years after sales began.

Surgical procedures have progressed from the conventional "laparotomy" to "laparoscopy," in which the abdomen is not cut open. Instead, instruments are inserted through the smallest possible incisions.

Laparoscopic surgery is less of a burden on the patient, as it allows for a smaller incision, less bleeding, and faster postoperative recovery. On the other hand, a certain level of experience and skill with surgical instruments is required.

Surgical robots have increased in automation and have become advanced systems that compensate for the limitations of human laparoscopic surgery. For that reason, introduction of these robots has been increasing at about 13% per year.

Surgical robots have especially stood out in prostate cancer surgeries. Robot-assisted surgeries surpassed the number of conventional laparoscopic surgeries in 2013, according to a survey by the Japan Society for Endoscopic Surgery. Robot-assisted surgeries covered by insurance were revised in December 2022 to include gastrointestinal surgery and gynecology. These changes have also been a driver of growth.

Hinotori's compact design is intended to fit the physique of the typical Japanese person. And the robotic arm has 8 joints that allows it to perform detailed work with smooth hand-like movements. The know-how of Kawasaki Heavy Industries, which has excelled in industrial robot technology, is concentrated here.

An additional advantage of the robot is that it cannot get tired or suffer from shaky hands. It is used alongside a detailed 3D-image monitor, which is placed in the so-called surgical "cockpit." From there, the surgeon can perform the procedure "as if he was operating inside the body."

For these reasons, the robot has been praised for reducing the burden on doctors compared to conventional products, even during long surgeries.

A doctor at a Japanese university hospital who has performed over 1000 surgeries with the US-made da Vinci robot said, "The 'da Vinci' machinery is large. And for a smaller Japanese person, there is the rare chance that the robot's arms come in contact with each other. But hinotori solves this issue. From the point of view of the surgeon, this is a significant improvement."

The demands on equipment used in surgeries are extremely high. Interruptions cannot be tolerated.

Meanwhile, sufficient training is required to operate hinotori. At the same time, though, doctors who have already used da Vinci can easily switch to using hinotori because there are many points in common. At the very least, training time can be shortened.

Japan is one of the world's leading producers of industrial robots. But for medical robots, it has lagged behind in domestic production and has relied on imports.

Olympus Corporation and a venture company from the Tokyo Institute of Technology have been developing surgical robots since the 2010s. However, Medicaroid was the first to put them into practical use. Although Medicaroid was a latecomer to the industry, it listened carefully to the needs of surgeons in the field. The increase in the usage of hinotori seems to come from the fact that the product reflects improvements and reliability.

Even more than before, the instruments at the ends of the arms can be improved and expanded using AI analyses of how surgeons, who are equipped with data from previous surgeries, perform operations. In this way, the wealth of data from the advanced surgical robots can be used effectively to comprehensively improve healthcare, and even support hospital management.

With the entry of many related manufacturers into the field, there are expectations for further development of the domestic market.

Furthermore, work is being done to begin demonstration tests of "remote surgery" systems that will make use of high-speed communication lines dedicated for this purpose. This will connect major health systems in urban areas to regional hospitals, allowing doctors to remotely carry out operations, by guiding, and supporting robots from several hundred kilometers away as if they were in the same room.

Hinotori is currently preparing for sales approval in the United States and Europe, where advanced medical services are widespread. As for the Asia-Pacific region, the company recently established a base in Singapore to prepare for sales in the area. It also expects to spread in this region, where economies and medical infrastructure are growing rapidly.

Medicaroid has set a sales target of ￥100 billion JPY ($780 million USD) for its surgical robot business by the end of March 2031.

Advances in medical technology are closely related to war. There are numerous aspects of medicine that moved from military use to civilian use. For example, beginning with medical tape invented during the United States Civil War in the 19th century. Other examples also include hemostatic agents, blood transfusion and delivery systems, X-rays, prosthetic arms and legs, hearing aids, nursing and rehabilitation techniques, and more.

The surgical robot "da Vinci" also has its roots in war. It is a medical device jointly developed by an American university and the United States Army for military medical purposes.

Ironically, the technological innovations that were developed to treat soldiers wounded in war and to defend against biological weapons are now reflected in advances in medical technology for the public.