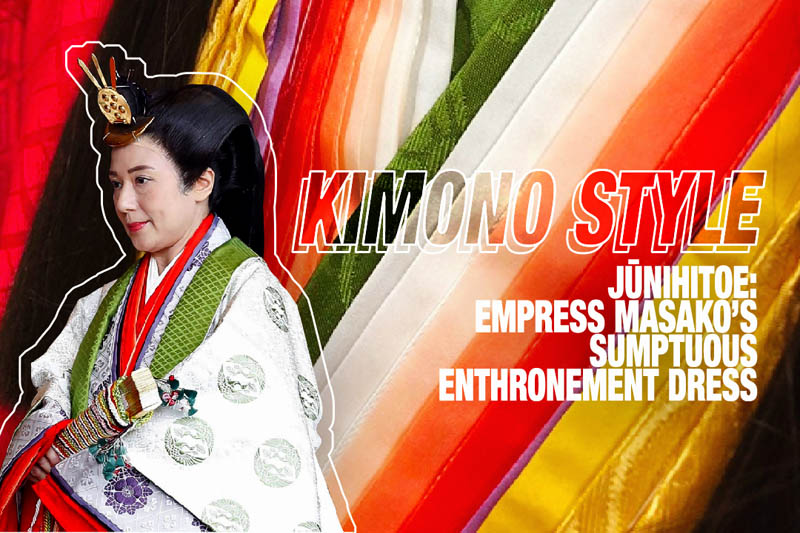 The recent enthronement ceremony of the new Emperor and Empress has been a talking point in the last few weeks, with dignitaries attending from all over the world, many in their own national dress.

The sumptuous dress worn by Empress Masako attracted the attention of news outlets both in Japan and abroad. As is Japanese tradition for formal imperial events, the clothing worn is that of the courtiers of the middle ages, the Heian era in Japan.

In this installment, I will discuss the history of the garment and my personal experience in wearing it. 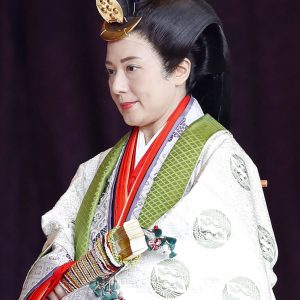 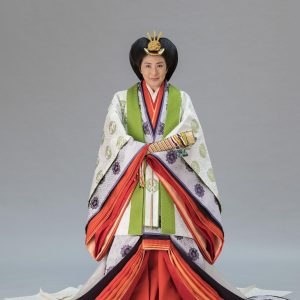 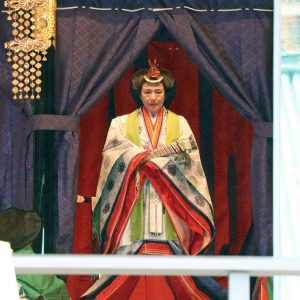 The jūnihitoe is a woman’s garment considered to represent the pinnacle of loveliness in Japanese traditional dress.

The name literally means “12 layers,” but there could be fewer or even more. Twelve is meant to signify there are a great many. Empress Masako’s jūnihitoe was a combination of various reds, a sliver of purple, some leaf green, all topped with a white brocaded coat.

For her wedding she also wore the jūnihitoe. At that time, it was a combination of layers of red and yellow with a green brocade jacket on top.

While many non-Japanese like to go to a henshin stadio (make-over studio) to dress up as a maiko or an oiran and have their photographs taken, I have to admit that my own imagination is captured more by the jūnihitoe.

How and why did such an incredibly complex and impractical-looking garment come into existence? What purpose does such impractical clothing serve?

As there are no extant versions of the clothing, our information comes from the illustrations of the Tale of Genji (early 11th Century), written by the courtier Murasaki Shikibu, and from other women of the Heian court who indulged in writing novels and diaries. Also, the jūnihitoe is pictured in scrolls that show scenes from The Tale of Genji.

While men of the period are sometimes seen playing kemari (a kind of football) and moving around outside in the pictures on these scrolls, women are almost always seen languishing in a little heap on the floor, surrounded by huge mountains of cloth and leaning forward considerably. Written records describing the correct kasane (layering) for various seasons do exist. This was studied in detail by Lisa Dalby and shared in her book Kimono (1993, Yale University Press).

In this period in history, the Japanese were already weaving complex silk patterns, largely learned from China and Korea, but the technique of dyeing patterns were still in their infancy. Tie-dye techniques were almost certainly known, but rather than reading motifs, the courtiers read the kasane combinations. These combinations usually bore the names of plants and flowers and were changed seasonally. As there were 72 seasons in the traditional calendar, there was a lot of changing of clothes going on.

Practical explanations for this clothing fail, as such a system was not worn by men. Neither was it for outside socializing, as women were rarely permitted to leave their rooms; when they did, they would ride in ox carts with screens on the windows.

Heian women were protected from the eyes of others at all times. If they were visited by a man, he would get only a glimpse of hemlines and sleeve edges as the woman’s face would be hidden by hanging screens.

According to the style of the day, women also grew their hair long, had their faces painted white, and their eyebrows shaved and redrawn halfway up their foreheads.

While European women have been hooped, bustled, and corseted into numerous intriguing shapes during the past few hundred years, the garment worn by Japanese remained relatively unchanged for over 1,000 years. Western fashion has always been about changes in shape, but Japanese fashion has had other preoccupations. Perhaps this is one reason why fashion in kimono has been missed by theorists.

A common feature of fashionable clothing is often its impracticality. Clothing has the ability to dictate the movements of its wearer, which often means limiting the movement — of women more than men. While men have suffered the inconvenience of the necktie, this hardly compares with the corsets, bustles, hoops, and, more recently, the impossibly high heels to which women have been subjected.

I was very curious whether the Japanese courtier of the middle ages was also a fashion victim like many of her Western counterparts, and about the impact of such an outfit on a woman’s body. I wanted to know how life was experienced by the women of the Heian court, who bore the weight of over 20 kilograms of silks on their backs and shoulders. Padded garments for winter weighed an additional four kilograms.

Underneath the layers they also wore red hakama (trousers), which were long bags that trailed out behind their feet. This meant that taking a step would lock up the leg in fabric unless it was actually kicked forward before putting down a foot.

The impact of the pressure of all this fabric on a woman’s body must have been devastating over a period of years. The Heian courtiers, however, lived for their culture of beauty. Largely unable to move, these women spent their time writing or playing musical instruments and indulging in contests comparing various types of incense. The lack of freedom to do other kinds of activities is a poignant reminder of the high cost of such beauty. 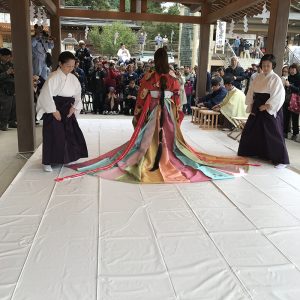 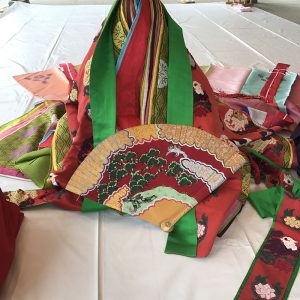 About three years ago, I watched a jūnihitoe dressing ceremony while attending a festival in Koma, Saitama, where a Korean community has lived since around the year 700. Reproductions of ancient Japanese and Korean costumes were a part of the celebration. The priest of the Koma shrine is a direct descendant of the ancient king of Koma.

Then recently it was my good fortune to be given a chance to wear this incredible outfit and find out what it was like to be a Heian courtier. The garment I wore was in a combination of colors called kabazakura, a subspecies of cherry blossoms.

I was not permitted to see myself until completion of the makeup and dressing process. My head was tightly bound and taped for the wig (presumably not necessary for Heian woman). Then I put on a nagajuuban, an under kimono, and the red hakama trousers. The ties were strong and firm around my waist, and already I could see the difficulty in taking a step forward.

A beautiful green hitoe was put over my shoulders, then an izutsu ginu — five shaded layers which were sewn together. This was followed by an uchigi (inner coat), uwagi (outer coat), and a karaginu (Chinese brocade woven jacket). Added to this was the mo, a long apron-like train that spreads out behind the wearer. Finally, the wig was placed on my head and a large fan put into my hands.

I felt the pressure of all the fabric on my back and shoulders and the huge inconvenience of having so much cloth attached to my body. I have no idea what the total yardage for such an outfit must be, but it is immense. 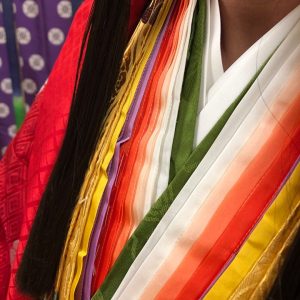 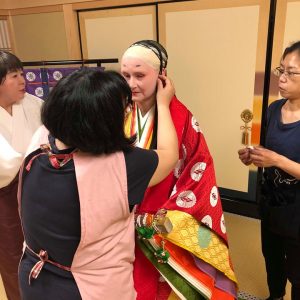 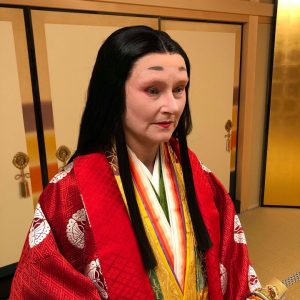 The first time I saw myself in the mirror I could hardly recognize myself. The beauty and opulence of the robes were carefully arranged to show each individual layer. It was a stunning achievement by the dressers.

However, the external loveliness and the inner reality of the impact on the wearer’s body were profoundly at odds with each other. These women literally dressed to become flowers in the house — a very romantic notion.

But, like flowers, they were virtually rooted to the spot. 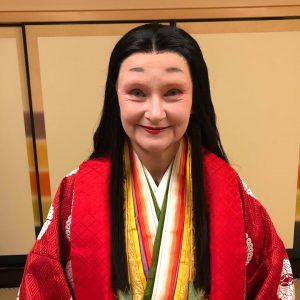 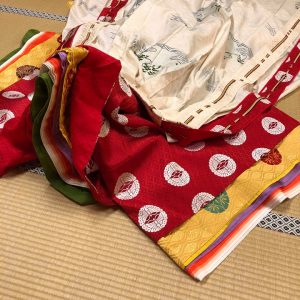 I practiced a few steps, which soon messed up my layers, and also practiced kneeling and standing. After 40 minutes I could no longer control my body’s natural desire to sweat and I asked to take off the precious robes before I had the chance to stain them.

After one tie is removed, the wearer takes one strong step forward and is released from the robes in an instant. The clothes remain, rather like a sculpture on the floor, although the embodied human is missing. There is such a scene in the Tale of Genji, when the protagonist thinks he is talking to Utsusemi, but in actual fact he addresses only her empty robes.

The jūnihitoe still has a strong influence on kimono culture today. It remains on hina ningyo, the dolls used to celebrate girls’ day, and is used in imperial weddings and other ceremonies. Simplified versions are available for brides and at photo studios for those who want to try this elaborate costume.

Although the kimono is now an incredibly simplified garment compared to jūnihitoe, the concept of kasane — layering — remains an important principle of Japanese fashion.

Until the Taisho period, it was very common for people to wear two of three layers of kimono, especially on formal occasions. Even today, each kimono is lined with another fabric that is deliberately sewn to show by about two millimeters at the hem and cuffs (with the exception of summer wear).

In order to create the effect of many layers, kasane eri (double collars) are commonly used with furisode, another kind of formal kimono.

Various reproductions of jūnihitoe reside in private collections around Japan. The garment must win the prize for the most beautiful but debilitating clothing ever dreamed up.

Kanto Region Waiting to Be Rediscovered As Center of Kimono Production