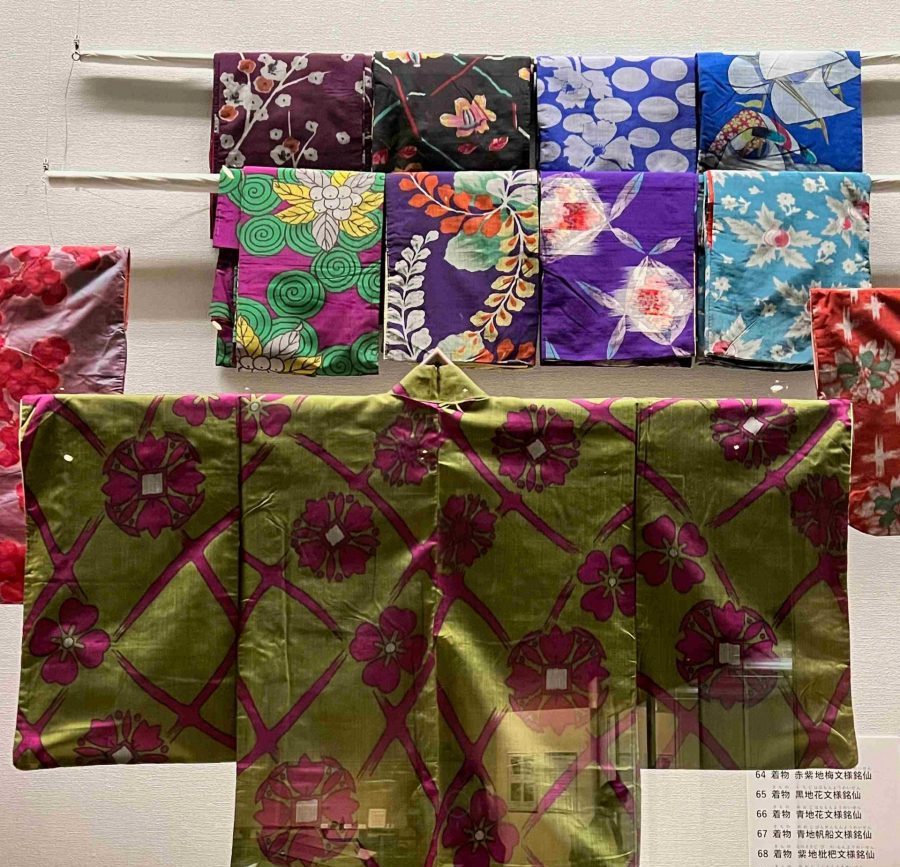 I put on one of my meisen kimono to go visit the Saitama Prefectural Museum of History and Folklore. It was time for the museum's meisen kimono show.

Located in Omiya Park, the Museum is lovely in autumn. It's also next to the famous Hikawa Shrine, which is also worth a wander around.

'Jeans' of the Meiji Era

The history of meisen and its production, and its position in clothing history are very interesting. At the beginning of the 20th century, Japan was busy exporting all of its best silk to the United States and some to Europe. Silk accounted for a third of Japan's total export income. So it was an important source of revenue.

The silk that was left for domestic use was of a lower quality. But since the Meiji period (1868-1912), Japan had been importing reeling and weaving technology from Europe. This was making the production of silk kimono much less labor intensive and much cheaper than before.

Makers learned how to produce a semi-mechanized type of kimono, which was suitable for everyday wear. It started out as home wear. But as its popularity boomed, it became very fashionable.

For its time, meisen kimono could be considered the "jeans" of the kimono world. And indeed it is estimated that at least 50% of Japanese women wore them.

Meisen kimono are a Kanto regional product and the industry was very important for Saitama Prefecture. Chichibu (Saitama Prefecture) is said to be the first place where the technique was developed. But Isesaki in nearby Gunma Prefecture also makes the claim to be first.

It was also produced in Ashikaga (Tochigi Prefecture), Kiryu (Gunma Prefecture), and Hachioji (western Tokyo). The collection on display is part of around 600 items donated to the museum by the famous meisen expert and collector, Kazue Kimura Kazue, who is a Chichibu resident.

What is unique about the production of meisen is that it is halfway between hand-loom weaving, which uses tie-dyed threads, and kimono which are dyed with stencils on white cloth. It uses a technique invented in Chichibu in 1908 called Hogushiori.

Originally Hogushiori were the warp threads that were all laid out and then dyed with stencils. They had loose diagonal threads through them to keep them in place, as stencil dyeing threads is very much more difficult than dyeing fabric.

After the warps are dyed, the Hogushiori threads are removed and the warps are put on the loom to be woven with the weft. Whereas with hand-loom weaving every thread would have been tie-dyed, this process is much faster and enables the use of more colors and complex designs.

Unlike woven kimono, which appear the opposite from the back to the front, meisen fabric is the same on the back and front. This enables the other side of the fabric to be used if the front gets dirty.

To Each Their Style

Chichibu typically used tategasuri, the warps were stencil dyed. But in the 1930s Isesaki started to stencil dye the wefts as well, in what is called heiyou gasuri, or a double ikat style. Isesaki was known for the exciting designs that they produced.

In 1934, Ashikaga introduced han heiyou, where sections of the weft threads were stencil dyed. There were also yoko gasuri, where the wefts only were stencil dyed. And kawari ori, or Kapitan meisen, which was produced after 1945 in Hachioji and had a patterned weave in the ground as well as the meisen patterns.

Chichibu is also famous for the tamamushi style, which shines like an insect's shell because the warps and wefts are opposite colors.

There are also posters and magazines on display. Meisen was advertised in many different ways. And there was a lot of competition between makers and department stores to produce the most interesting designs. Magazines from the World War II period show how to turn your meisen kimono into pants and padded headgear to protect yourself in dangerous situations.

Changes in the Postwar Era

After the war, the industry largely turned to making futons and cushions as fewer people were wearing kimono.

Various tools are on display so it is possible to see how the fabric was produced.

Meisen is still loved. It is popular in antique shops for its uniquely bright, modern-looking and joyous appearance. Even yachts, tennis rackets and oil lamps are on the kimono.

The exhibition ends with pieces from two workshops that are still producing meisen in Chichibu, with silk from silkworms harvested in Chichibu. They are Arakei and Henmi workshops.

The link to the exhibition, which runs to December 4th, click here. To find out more on the workshops, click here and here.