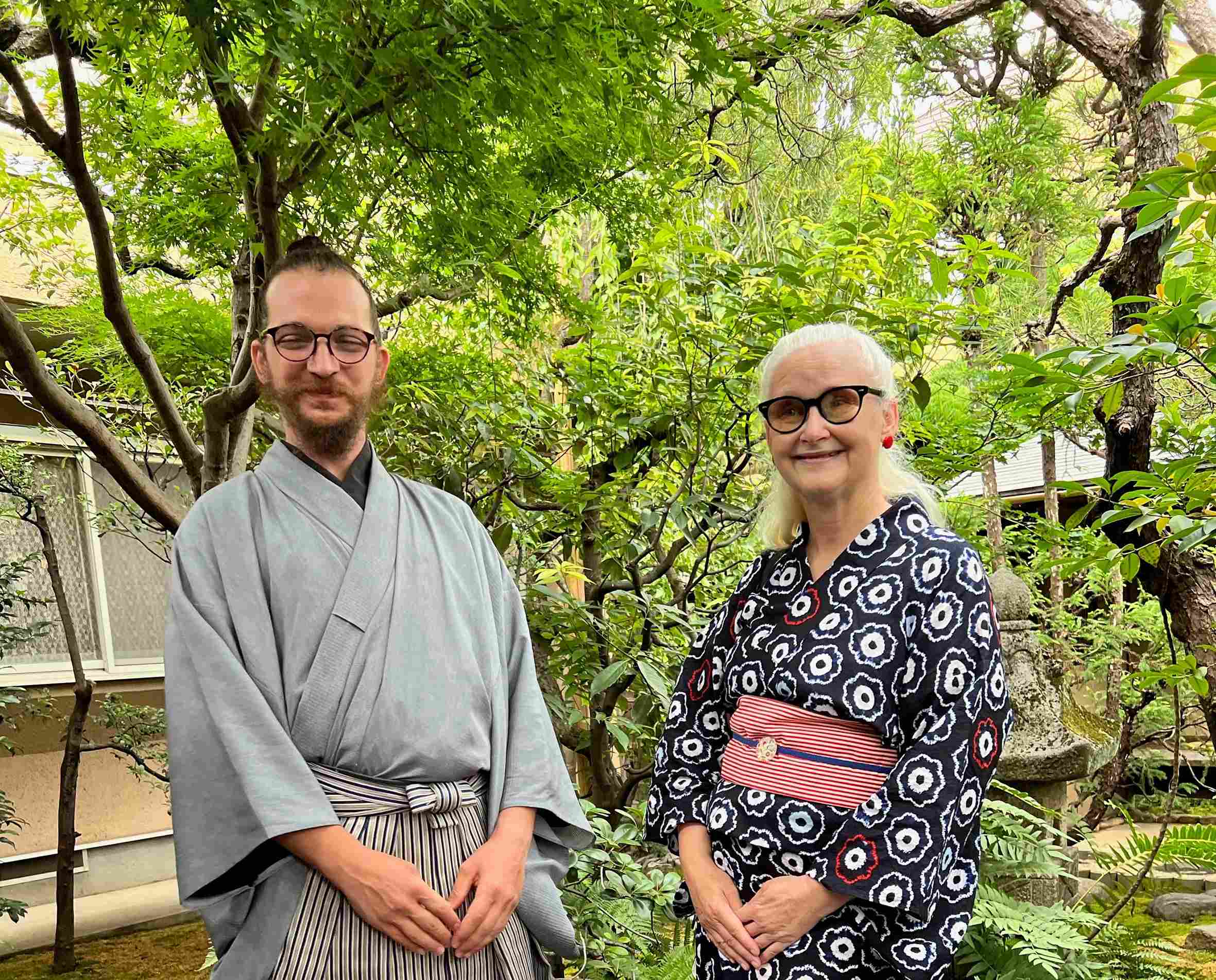 In mid-2021 I interviewed Michael Kuledge who studies Japanese dance.

This time my subject is Zacchari Touchane, who I met when a friend introduced me to him in a small tea house in Nakai. The story centers around food, but in a sense, it is more about nourishment than the food itself.

Zac Baran, as Touchane is more commonly called, has an adventurous spirit and loves to learn things. And he has certainly not plodded the typical English teaching road in Japan.

Zac was born near Paris in 1983. The area was not great, he wasn't good at soccer, and was small in stature.  So he joined a judo class.

Judo was popular at the time, and it kept him out of trouble on the streets. It also taught him respect and discipline. (Learn more about judo through Olympic gold medalist and national coach Kosei Inoue's messages.)

This was Zac's first encounter with Japanese culture, and he continued it for 15 years. He even taught children's classes until he decided to leave France. Later he went to London to work in a bar, and then spent several years traveling around and working for Club Med, where he learned the hospitality business. He realized that his lack of English skill was a problem though, and decided to go to live in London and study English.

Zac turned up at a job interview in London, still with his suitcase in hand, and it happened to be a yakitori bar. The manager, Malcom Simpson, took a chance on him and he started working while studying during his breaks.

Eventually Zac began to meet a lot of Japanese people. He was very dedicated and worked really hard at the yakitori bar for nine years. One of the first team of waitresses became his wife and they had a daughter.

Then the time came to put his daughter in school. Zac and his wife had to make a decision about where to live: London, Paris or Tokyo. As his wife was interested in returning to Japan, they decided to make the big move to Tokyo.

Discovering Words and Flavors in a New Hometown

It was about ten years ago that Zac arrived in Japan ー with almost no Japanese, but having skills in hospitality. His first job was at Tableaux, an upmarket restaurant which is a part of Global Dining group. It was a very hard year for him learning Japanese at the same time as working, but Zac wanted more.

He had heard about a famous chef at another restaurant ー Chef Shinobu Namae ー who had worked at the well-known Fat Duck restaurant in the United Kingdom. Zac thought it would be amazing to work for him.

Two visits to L' Effervescence showed him that the restaurant's staff were almost exclusively Japanese, so he thought he had something to offer. He asked for a job and was told that he would have to start from the very bottom rank. Zac was willing to do anything, and he started at the bottom and worked his way up.

While always asking questions about the ingredients and about the presentation of the dishes, he studied Japanese in his short breaks. Chef Namae noticed his dedication, and eventually he became the Maitre d' at L' Effervescence. Meanwhile, the restaurant was getting Michelin stars and nominations on Asia's Best 50 Restaurants.

In 2015 Chef Namae san decided that his staff should learn the tea ceremony and be able to present tea to the guests properly after their meal. This is when Zac met Udagawa Soukou, his tea master who is 18th generation of Sowaryu Tea School, and also a Zen monk from Shinju'an Temple in Daitokuji, Kyoto.

The restaurant was closed for refurbishment for two months, and during that time Zac and the other staff members were learning the tea ceremony. When the restaurant reopened, after the meal Zac would serve tea in his suit.

Master Udagawa shared the Sowaryu license with Zac, who was fascinated with the tea ceremony and wanted to learn more. In 2018 He told Chef Namae that he wanted to immerse himself in tea culture and left the restaurant to concentrate on tea.

Master Udagawa told him that he needed a kimono and had one made for him. Recently he also had an unlined summer Edo komon kimono made. He now assists Master Udagawa at tea ceremonies and is invited to many events.

The connection with the restaurant continues as the staff come to learn tea with him. Every year in the iris season (May-June), he serves tea and sweets during a month-long event at the Nezu Museum.

Zac has seamlessly crossed the borders of hospitality, tea and Buddhism.

Sometimes Zac does a stay, known as sumikomi, at the Shinju'an Temple in Kyoto. There he is up early cleaning the garden, gardening, working for the monks, and sometimes doing zazen. He wears a samue at this time.

Zac has his own tea students. And he recognizes that he learns from them as well as teaching them. He recently got his tea name, Souka, will slowly start to collect the utensils that he will need to host his own formal ceremonies.

Zac needs to learn about the taste, quality and seasonality of items to collect. Master Udagawa has a tea house in Tokyo's Mitaka neighborhood with a beautiful garden where I interviewed Zac. He also built a small tea house in Nakai (near Tokyo's Nakano neighborhood) which is largely used by Zac, and a larger tea house in Kottodori, named Minamiaoyama Sokkon.

With preferences for which venue works best for which function, Zac likes to hold Yobanashi Sahan in Nakai tea house. It is an evening chat, with tea and rice, soup and three dishes. He can host up to five guests. More casual than the regular tea ceremony, it uses Zac's accumulated skills and serves non-Japanese dishes with his Japanese tea. Sometimes he wears a yukata for these evening gatherings.

Will he always stay in Japan? Perhaps, but he also hopes that one day perhaps he could open up a small restaurant in the south of France and offer tea ceremony and zazen.

Information about Zac can be found here. His Twitter handle is here, or @MadamTouchan

Information about the Sowaryu School of Japanese Tea can be found here.