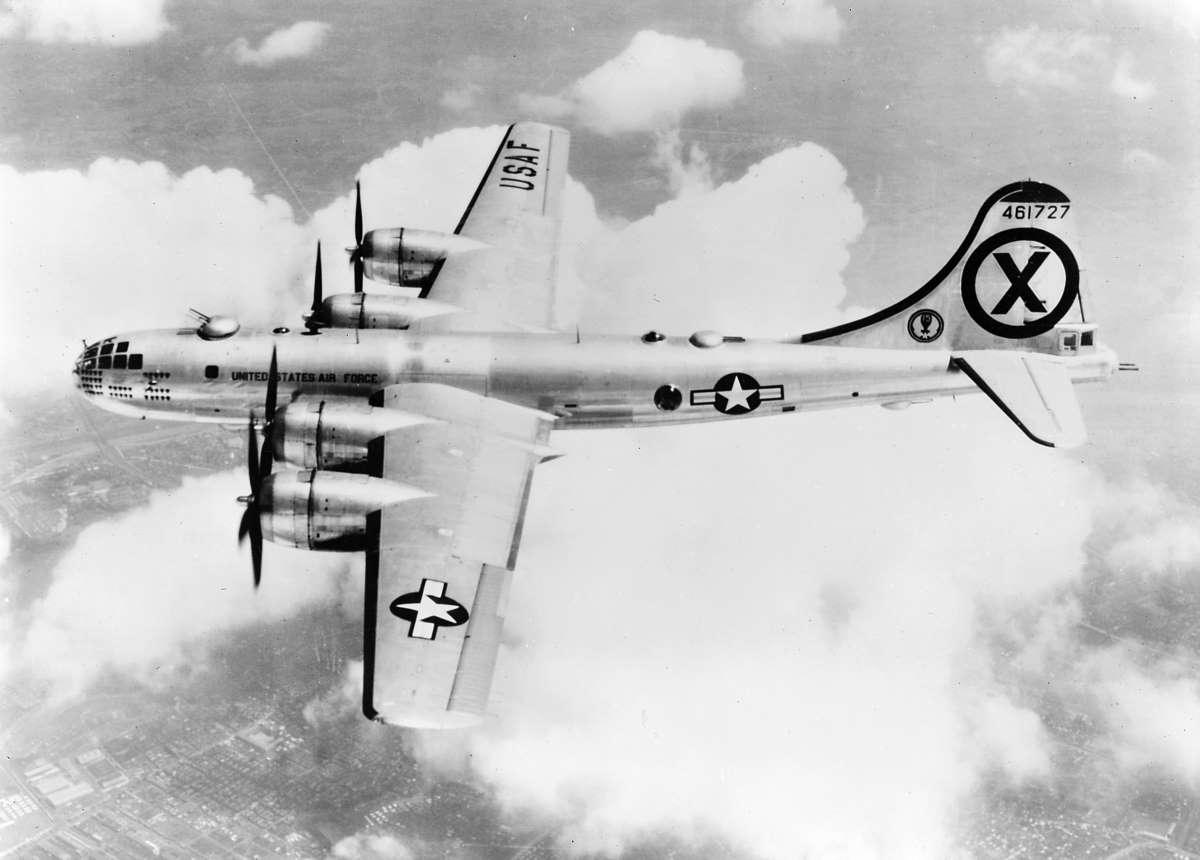 A US Air Force Boeing RB-29A Superfortress (s/n 44-61727) from the 91st Strategic Reconnaissance Squadron over Korea. This aircraft was shot down by MiG-15s, possibly over China or the extreme northern part of Korea on 4 July 1952. 11 of the crew of 13 were taken prisoner, two crewmembers died. Original caption: "View of RB-29 of the 31st Reconnaissance Squadron, somewhere over Korea., ca. 07/1952" Public Domain photo from Wikipedia

One of the most potentially dangerous times of the early Cold War period happened 70 years ago on October 7, 1952. That is when Soviet fighter planes shot down a United States Air Force RB-29 Superfortress flying near the disputed Northern Territories.

All eight crewmembers of the unarmed surveillance plane were killed.

The downed aircraft was stationed at Yokota Air Base, a facility that has been used continuously by the US military since September 1945. Nicknamed "Sunbonnet King," the aircraft was part of the 91st Strategic Reconnaissance Squadron, a unit that had seen heavy losses over Europe during World War II.

Deactivated in 1945, the Wing was reactivated in 1948, and later placed under the operational control of the Far East Air Force (later known as Pacific Air Forces). After briefly locating at Johnson Air Base (today's Air Self-Defense Force's Iruma Air Base) starting November 15, 1950, the 91st moved to Yokota Air Base that December, following the start of the Korean War.

The squadron also conducted shipping surveillance over the Sea of Japan near the Siberian coast and leaflet drops over North Korea. In addition, the plane flew other special photographic missions and conducted electronic reconnaissance to determine frequency, location, and other characteristics of enemy ground radar.

Shot Down Over the Northern Territories

The RB-29 was on one of these latter missions when it was shot down by two Soviet LA-11 fighters near Yuri Island in the Habomai Island group, islands illegally seized by the Soviet Union in September 1945 after Japan's surrender.

At the time of the incident and for decades afterwards, the position of the United States government was that the plane had been on a routine operational flight and was shot down over international waters without provocation. In the early 1990s, according to declassified official documents, the US side acknowledged that the plane in fact had been on an intelligence-gathering mission.

US military authorities were tracking the plane at the Air Defense Center in Nagoya (where the site Fifth Air Force headquarters was located before temporarily moving to South Korea during the Korean War) when they saw the radar trace of the US plane merge with that of an unidentified aircraft. The RB-29 broadcast a mayday message before it went down.

United States inspectors later spoke with officials at the time who all insisted the plane was on the US side of the so-called "MacArthur Line" that had been initially established in September 1945 (and gradually expanded afterwards) to permit fishing by Japanese vessels in waters surrounding the country.

Searching for the Remains

A US search and rescue mission was immediately launched with fighters from Chitose Air Base and planes from the 3rd Air Rescue Group, one of the largest and most versatile rescue units in the world at the time, which was responsible for such operations within the Far East Command's area of responsibility. Although a Navy vessel also joined in, the efforts to locate the downed crew or their aircraft, which continued until October 12 amid bad weather, were unsuccessful.

The Soviets similarly launched a search. In their case, sailors aboard a KGB Maritime Border Guards ship witnessed the shootdown and were tasked to sail to the crash site to recover survivors and/or plane parts. They found the body of an American crewmember but no one or nothing else.

That is not surprising as the Soviet pilot, who was serving as the Deputy Commander of the 368th Fighter Air Regiment in southern Sakhalin Island and had shot down the RB-29 that day, told interviewers later the U.S. "plane blew up in the air at 5000 meters, with the wings separating from the fuselage before it crashed into the sea near the shore...no air crewman could have survived the shootdown."

There were supposedly some reports from nearby Nemuro, Hokkaido Prefecture, of parachutes having been sighted afterwards. But the information appeared to have been erroneous.

The Soviet pilot added that after intercepting the RB-29 south of Harukaru (or Demina) Island, he "warned the plane and tried to get it to land. When [my] warnings were ignored, [I] fired at it."

The body of First Lieutenant John R. Dunham was transported to Yuri, an uninhabited island which previously supported a population of more than 500 Japanese who had been mostly engaged in commercial fishing. Dunham, the flight navigator, was buried there on October 10.

By October 8, Soviet leader Joseph Stalin had been informed of the potentially volatile incident. It is unclear what actions he took at this juncture, but the Soviet Union claimed and controlled Yuri, as it did all of the other Northern Territories and islands in the Kuril Island chain.

This, the United States government did not recognize. Instead, the US side asserted that it was flying over islands rightfully belonging to Japan and thus had not violated Soviet air space.

The Soviets, in contrast, argued that the plane violated their airspace three times over the Southern Kuriles, the first two times for 8-9 minutes each over Suisho (or what Russia calls Tanfyilev) Island and a third over water. Soviet documents state, too, that the US plane fired on the Soviet fighters first, which were forced to return fire. This does not appear to be accurate.

Subsequent interactions were inconclusive, and Stalin's death in March 1953 no doubt delayed any negotiations whatsoever. After a final try at reaching a diplomatic solution in late 1954, the US government decided to raise the issue in the International Court of Justice in mid-1955.

A claim was filed seeking indemnities of $1.62 million USD from the Soviets. However, the ICJ decided it did not have jurisdiction in the matter, in part because the US government challenged Soviet sovereignty claims to the Northern Territories.

The ICJ therefore removed the case from its list.

Something Close to Closure

The matter remained unresolved through the end of the Cold War. But interestingly, a resolution of sorts was found in the early 1990s, bringing closure to at least some of the families of the Missing in Action.

In March 1992, after the end of the Cold War, the governments of the United States and the Russian Federation formed a Joint Commission on POW/MIAs to investigate cases where either side might have information or be able to provide its good offices on missing service members. The following year, the Commission established the Cold War Working Group that looked at ten specific incidents of US aircraft lost between 1950 to 1965. The RB-29 incident of October 7 was one of those.

Bilateral investigators gathered all available evidence and testimony and visited the scene twice. Eventually, Dunham's remains were located and repatriated. The KGB border guard who had found his floating body even returned Dunham's Naval Academy ring, which he had kept, to be given to the US officer's widow.

Unfortunately, the islands in question have yet to be returned. And there are regular Russian aerial incursions into Japanese airspace.

As this commentary has shown, it is all too easy for the situation to escalate. Fortunately, in 1952, amid the Korean War and Cold War, the RG-29 incident did not get hotter than it needed to. But other disputed airspaces in the north, east, and south around Japan still exist, making similar incidents readily imaginable.

Dr Eldridge is a former tenured associate professor of US-Japan relations, former political adviser to the US Marine Corps in Okinawa, and the author of The Origins of the Bilateral Okinawa Problem (Routledge, 2001). Find other essays and reports by Dr Eldridge on JAPAN Forward, here.