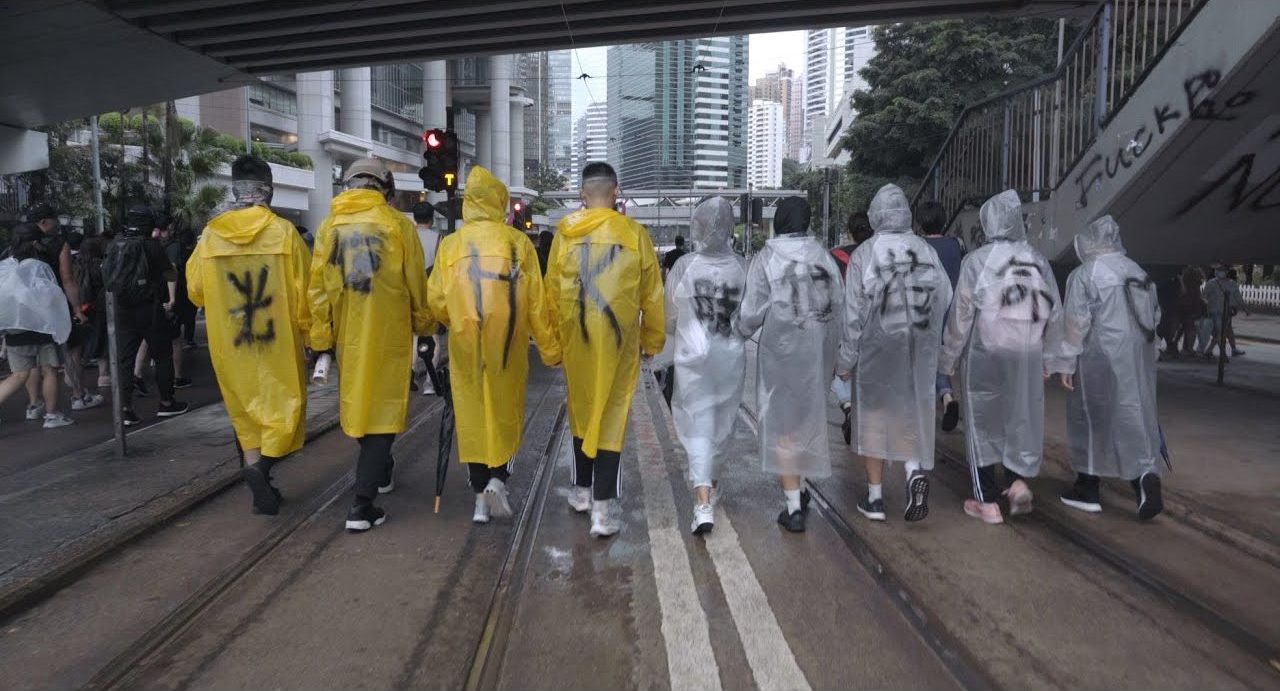 Premiered at the 2021 TOKYO FILMeX Film Festival, Revolution of Our Times is being released to public audiences in Japan.

The film, whose title comes from the 2019 protest slogan “Liberate Hong Kong, Revolution of Our Times” (光復香港，時代革命), has become known worldwide due to its surprise screening at the Cannes International Film Festival in mid-July 2021. It was the first time that the film had been made public.

The protests arose out of concerns among Hong Kong citizens that their rights would be violated by the flawed mainland justice system and the city’s judicial independence would be compromised. And indeed, many of these fears were realized with the passage of the 2020 National Security Law for Hong Kong.

The film was directed by Kiwi Chow, known mostly for his other politically-charged work from 2015, Sap nin (Ten Years).

Over a period of two years, Chow filmed and edited the documentary in secret, taking care to avoid problems under the strict censorship laws imposed by Beijing that restrict freedom of speech in Hong Kong.

Due to these laws, except for the director, the names of the people involved in the production have not been disclosed for their protection.

The film credits simply say that it is made “By Hongkongers.”

A masterful balance is achieved between the protesters’ mission to protect democracy in Hong Kong and the severe and at times insurmountable barriers imposed by the state and police.

As well as presenting the general view of the massive social movement, Kiwi Chow illustrates the development curve of each participant within the movement. In Chow’s film, the story is exclusively told by those fighting on ー or supporting ー the front lines against an authoritarian police presence.

It is Chow’s strategic decision to let the people, who were most directly affected by the protest, tell the story. This enables him to present a compelling case for the liberation message of the protesters to his audience.

Interviews are conducted with ordinary citizens involved in the movement, including a journalist, a paramedic, students, and a social worker. Their voices are altered and their faces obscured by masks or blurred in post-production.

According to the endnotes, a number of people in the film have been exiled or are in prison today.

In Hong Kong, 7.4 million people lost their freedom, and the police beat, battered, and arrested the younger generations without justification.

There are scenes in which tear-gas canisters are fired unprovoked at unarmed civilians. In some, the police rain down truncheon blows to prone teenagers, even shooting them at point-blank range.

A 70-year-old man in the film is knocked down by riot troops, while tearfully admitting: “I can’t protect the children anymore.”

It is chillingly graphic to watch the film’s footage of the vicious attack on citizens at the 721 Yuen Long train station (also known as the 721 incident) in July 2019, carried out by gangs in white T-shirts. Meanwhile, in what’s presented as obvious collusion, the authorities did nothing.

Freelance journalist Gwyneth Ho was on the scene and reported the carnage live. She was also severely beaten during the ordeal.

Fortunately, she survived and was able to describe the events leading up to the attack on camera.

Chow himself spent days and nights with the protesters as they took over the Hong Kong Polytechnic University in one of their biggest and most impactful protests which, like all the others, was met by brutal and relentless force from the Hong Kong police.

Chow himself claimed in an online interview that he was hit by a rubber bullet fired by the police while filming and momentarily feared for his life. The experience led him to think of his family.

He was struck in the head by the bullet but fortunately was saved by a helmet he was wearing.

The film also includes some striking scenes, such as aerial footage of the “be water”-styled protesters retreating and dispersing over the city to ensure they are ahead of police shock troops who are pursuing them.

According to Chow, since the Hong Kong National Security Law is strictly enforced, any person or organization opposing it (or anyone enforcing it) will face criminal charges. Therefore, the organizations have all disbanded and no similar movements or protests appear to be occurring at the moment.

“All of us are more concerned with how we can help our brothers and sisters who are now in prison awaiting trial, he says, adding, “who I refer to as my limbs.”

Chow nevertheless says he will continue to speak out.

He revealed that upon the completion of this film, he considered moving abroad. But after discussing it with his family, he decided to stay in Hong Kong.

“The people of Hong Kong still remain numerous, and we are willing to work with them to continue to give voice to their concerns,” he continued. “ As a Christian, the only thing I fear is God, never the Chinese Communist Party.”

This detailed and touching documentary on Hong Kong’s protests since 2019 is without a doubt the most comprehensive and heartfelt yet.

Revolution of Our Times will be available in 17 theaters in Japan, including the Euro Space (Shibuya) starting Saturday, August 13.