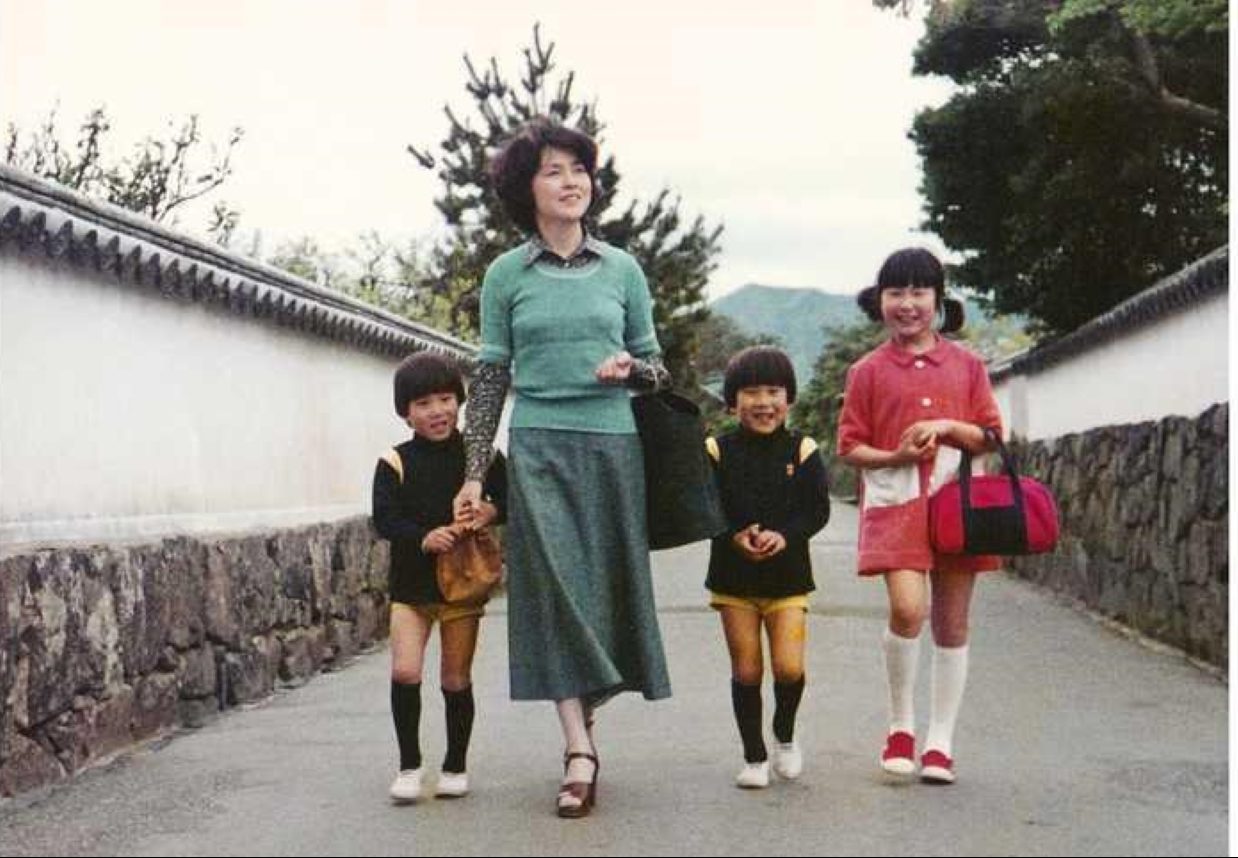 This photo was taken by Shigeru Yokota during a family trip to Hagi, Yamaguchi Prefecture, in 1975. Sakie Yokota showed this photo to US President Joe Biden in May 2022, and told him about the pain of having Megumi stolen away from her.

The days are becoming increasingly bright and sunny in Japan, and I can feel the life-giving energy of early summer.

On June 5, it will be two years since your father was called to heaven. More than anything else, he most wanted to see you again.

I begin each morning by greeting your father’s photo at home. I also update him on the little things that happened throughout the day and sometimes offer him flowers or sake.

I shared my heart with him, carrying a picture of our family taken by your father during a trip to Yamaguchi. In the photo, you, your younger brothers Takuya and Tetsuya, and I walk side by side with beaming smiles.

Only two parents of the abduction victims, Akihiro Arimoto and I, could make it to the meeting. The US President came and kneeled before me while I was seated, looked me firmly in the eye, and said, “I know what it’s like for a parent to lose a child.”

President Biden has experienced the loss of his children, one of them due to illness. He empathized with us and promised to help us solve the abduction issue. I found him to be a very kind person, just like your father.

Today, a harsh and cruel reality continues to unfold in the world.

In Ukraine, President Zelenskyy is leading the fight to defend his homeland against Russia’s invasion, and his people are fighting for their lives.

Both North Korea’s abductions and the invasion of Ukraine are egregious violations of sovereignty. But for Japan, many long years have passed without a resolution. Japanese politicians must speak and act resolutely in a way that can penetrate North Korea.

There is no more time left for the abductees’ families. Shigeo Iizuka, who led the rescue movement for a long time as a representative of the family association, passed away in December 2021. It was devastating that he couldn’t be reunited with his sister, Yaeko Taguchi.

Takuya has taken over as the representative of the family association, becoming the third representative following your father and Mr Iizuka. The abduction issue was supposed to be solved in my generation, but we have been forced to pass this burden on to our children’s generation.

How twisted and cruel! Politicians and bureaucrats must face the reality of the situation. We need as many Japanese citizens as possible, and as many people as possible around the world, to raise their voices now for a breakthrough, however small, to bring us closer to a solution that brings you and the other abductees home.

It has been reported that North Korea is experiencing a COVID-19 outbreak. I am very worried about your health and the health of the other abductees.

I hope that the Japanese government and the international community will take these changes in North Korea as an opportunity to act decisively, and lead Supreme Leader Kim Jong Un to make the decision to return all abductees.

The family association has continued to stress that unless the abductees are reunited with their parents while they are still alive, the outcome cannot be called a true resolution.

But time passes mercilessly, and sad farewells continue one by one.

Your mother’s brother, your uncle, also passed away last month. For a long time, he had been receiving medical care in our hometown of Kyoto. Every time I went to see him, he would look at your picture and worry about your wellbeing.

Even though I know that life is limited, having to say goodbye to a close family member is deeply painful and lonely.

I turned 86 years old this year. Next year, I will be the same age as your father when he passed away at 87. I’m finding it increasingly difficult to speak, and I can no longer speak for long periods of time at meetings and events.

Two years ago, I vowed to carry on your father’s legacy and fight to the very end. My determination has not wavered in the slightest, but I cannot hide the deterioration in my physical strength.

It is only because of the kindness of our supporters that I can live one day at a time.

Ordinary people like us cannot understand what is happening at the core of the chaotic international situation, but I feel that the character of Japan as a nation is being tested.

To allow such a violation of sovereignty — to fail to bring back its own people so cruelly taken away — is nothing short of a national disgrace.

The abduction issue does not just concern our families or the families of the abductees. The same tragedy could strike Japan again if it remains a nation that allows the abductions to stay unsolved.

We have kept your father’s ashes in an urn at home. Since you and your father are no longer able to embrace each other, the least I can hope for is for you to one day hold this urn in your hands. Takuya, Tetsuya, and I made this decision together.

For this to come true, you need to be in good health and come back to your homeland as soon as possible. Stay strong and take good care of yourself. I am praying for you, desperately thinking of ways to bring you home, and waiting and believing that we will be reunited one day.

Learn more about the issue here, and from the following reports: