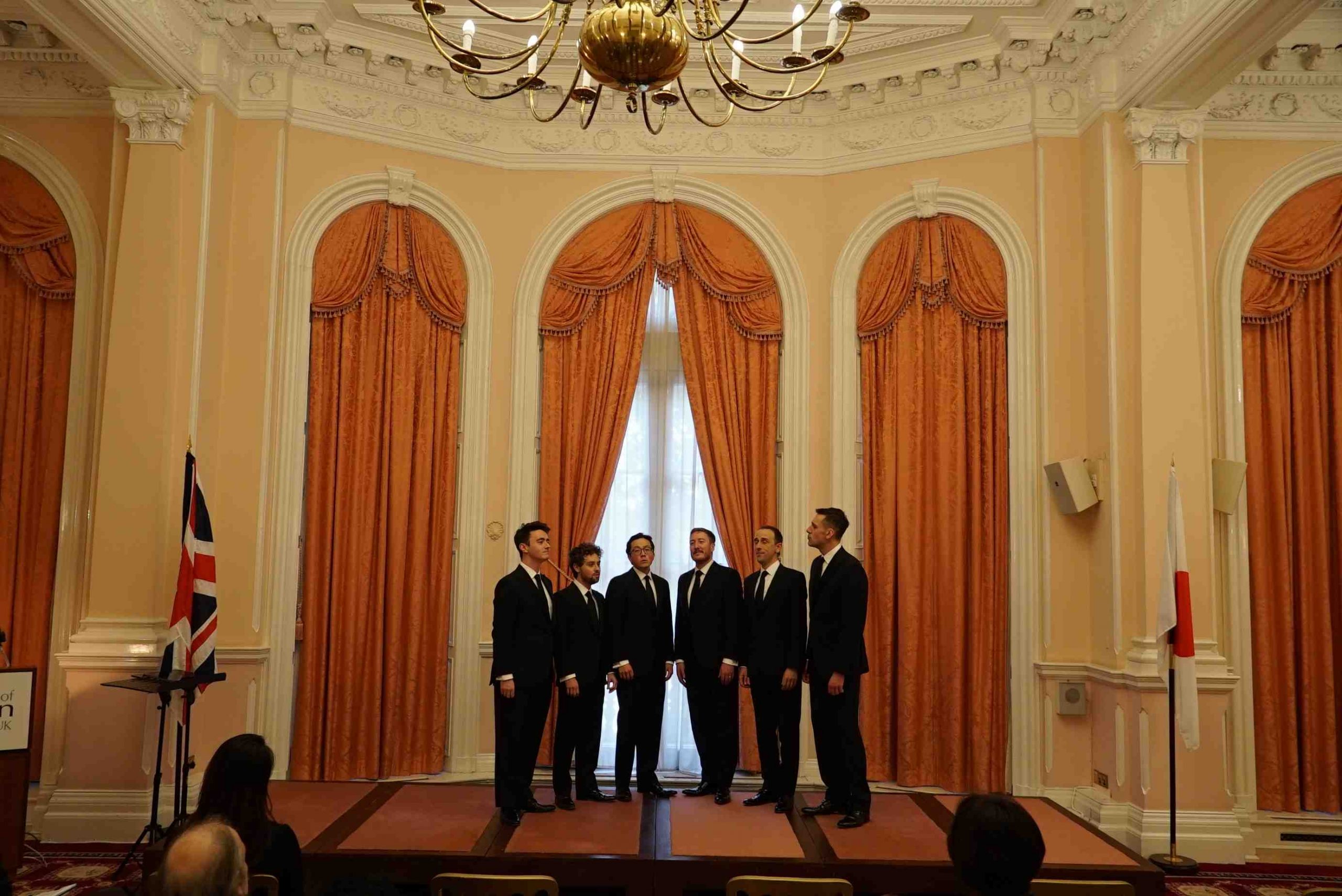 The King's Singers at the Embassy of Japan in the United Kingdom.

The year 2022 will soon come to a close. But before that, here is a rundown of JAPAN Forward's most-read articles, and a reflection on one of our most memorable moments: the return of The King's Singers to Japan.

Here's a sneak peek. The top story by JAPAN Forward was on Super Typhoon Nanmadol, which hit southern Kyushu in September. An article with videos and images showing the extensive damage caused by heavy rains and flooding in the Tohoku region this summer came in second.

The two most-read articles are a reminder that Japan is a country prone to natural disasters. But other popular articles describe the captivating beauty of Japan's nature, including open-air hot springs and the cherry blossom season. Our articles analyzing topics such as globally renowned Japanese athletes and the Taiwan contingency were also among the top. The rest of the top 25 articles will be revealed on JAPAN Forward at the end of the year.

This year, we will also start reviewing our articles based on popular searches on our website. In 2022, the most-searched word was "editorial." This indicates that our English-speaking readers are not only keen to read our news but also our opinions from Japan.

It would also be interesting to review JAPAN Forward's coverage of topics that were among the top buzzwords of the year. They include "mura kamisama," a moniker of record-setting baseball player Munetaka Murakami, "Kyiv," "state funeral," and "shukyo nisei," a term referring to people raised by parents with strong religious beliefs.

But this article, "Celebrating The King's Singers Back in Japan" has personal significance for the JAPAN Forward team.

The King's Singers (TKS), also known as "the kings of acapella," is a British a cappella sextet with close ties to the British Royal Family. Three years ago, the group held a special one-night concert in Tokyo to celebrate the arrival of the Reiwa era. I had the privilege of offering my assistance then.

The group's next Japan tour, canceled several times due to the pandemic, finally became a reality this year.

Moreover, at The King's Singers' request, JAPAN Forward became the producer of their 2-CD album, Reiwa. It is the live recording album of their special Reiwa concert, released to coincide with the group's Japan tour.

Their beautiful rendition of the Japanese national anthem "Kimigayo" and nostalgic songs like "Takeda Lullaby," "Nemunoki Lullaby," and "Furusato" moved me to tears.

The King's Singers embarked on their Japan tour on December 8 and made stops at seven cities including Tokyo, Osaka, and Hiroshima. Their tour just ended on the weekend of December 17.

A performance dedicated to the late Queen Elizabeth II opened this year's program. It was followed by Christmas songs from various countries. To the delight of the audiences, a piece composed by the preeminent Joe Hisaishi, titled "I Was There" was premiered during the program. The finale was a Beatles classic, which sent the audience into raptures.

Still, 2022 was also overcast by the shadows of the ongoing COVID-19 pandemic, the Russian invasion of Ukraine in February, and China's aggressive expansionism and human rights abuses. How should Japan steer itself in a world plunged into uncertainty and confusion?

Japan is currently in the Reiwa era, and "Reiwa" means "beautiful harmony." It is a concept that will no doubt become increasingly important in the future.

JAPAN Forward, which is now in its sixth year, has welcomed five new members to the team in 2022. Together, we will continue to deliver the true voice of Japan to the world.

We wish you a Happy New Year!

Watch for the next issue on January 16.

It is a 2-CD album with 20 songs and a bilingual lyrics card according to the language of the song. The price is ¥5,000 JPY including tax and shipping. For inquiries or purchases, please E-mail: info@japan-forward.com or call 03-3275-8511.