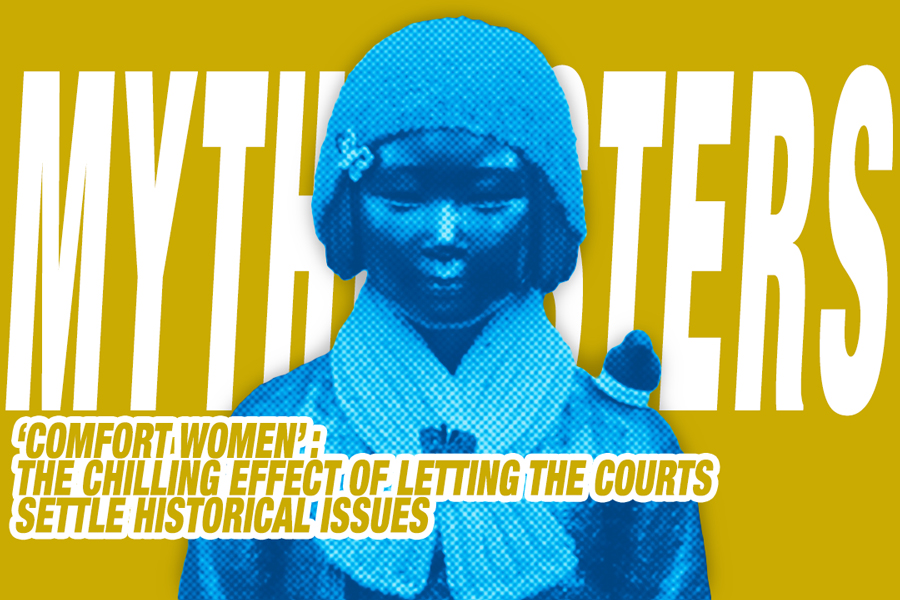 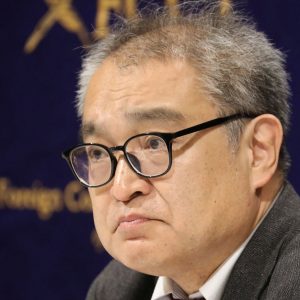 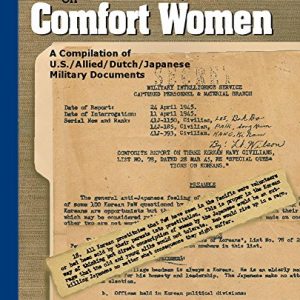 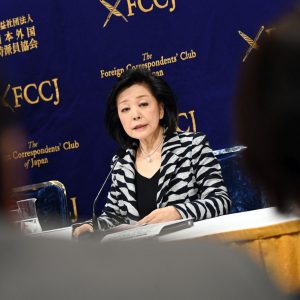 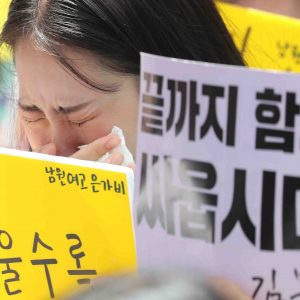 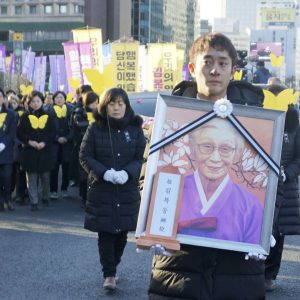 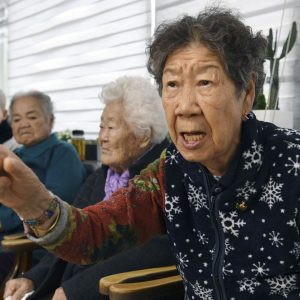 In 1991, Takashi Uemura wrote an article based on a recording that was made by the first of the “comfort women” to go public, Kim Hak Sun.

The article attracted little attention until 2014, when the Asahi Shimbun belatedly launched a third-party investigation into its publication and promotion of claims about comfort women recruitment made by Seiji Yoshida. The claims had been proven to be fabrications decades earlier.

One short section of the report cited the Uemura article, noting and retracting the use of Women’s Volunteer Corps (WVC) as equivalent to the military comfort women system. Uemura, of course, had treated the two as equivalents. A statement in Uemura’s 1991 article was explicitly repudiated as being in “error,” and an apology was given for the use of phrasing that could be expected to leave ordinary readers with the impression that Kim Hak Sun had been taken by force, when she herself had said she had simply been deceived.

Following on, the journalist Yoshiko Sakurai wrote several articles in which she used the term fabrication (捏造) to describe Uemura’s article. Specifically, she used the term in reference to a statement in the Uemura article that said, “It is found that one of the ‘Korean comfort women’ who was taken to the battlefield under the name of ‘Joshi Teishin Tai’ (Female Volunteer Corps) and was forced to prostitute herself for the Japanese soldiers, is still alive in Seoul.”

He in turn brought separate suits against Sakurai and Tsutomu Nishioka, an academic who served on the Asahi investigatory committee, and the magazines that had published criticism of his article. Uemura’s various suits are a confusing mix of civil (defamation) and criminal (harassment) allegations. All of the allegations, though, ultimately stem from the controversy about a system that came to an end 75 years ago.

The first court decision on Uemura’s suit against Sakurai was rendered by the Sapporo District Court on November 9, 2018. Its judgement was that, while Uemura’s reputation had suffered as a result of the fabrication charge, the articles did not constitute defamation warranting damages, because Sakurai had consulted credible Japanese and Korean accounts. Thus, according to the court, there was no basis to judge her statements to be groundless claims lacking public merit and interest.

Uemura has indicated his intent to appeal this decision to a yet higher court. His supporters stress that nowhere in the decision is the validity of the “fabrication” claim recognized by the court. But others point out that Japanese law allows for good faith claims that are not necessarily literally true.

Uemura also lost in his suit against Nishioka and the publisher Bungei Shunju. His appeal against that decision was dismissed on March 3, as this article was being written. Uemura has indicated that he will also appeal this adverse decision.

The first decision received a small amount of attention in English, and the second almost none.

Sakurai’s characterization of Uemura’s article as a fabrication did, however, receive substantial foreign coverage in English because it was seen as provoking a “right wing” campaign of threats against Uemura and his family, including his daughter, and two colleges that had employed or were planning to employ him.

While he has made much of this reprehensible harassment, it is not really relevant to the question of whether there was an element of fakery in his account.

Sakurai did not call for the harassment, and in fact condemned it, albeit in terms that did not satisfy Uemura supporters. An arrest was made with respect to the telephone threats made to Hokusei Gakuen University.

Uemura also won a civil judgement against an individual who had made threats on Twitter. Uemura brought suit; his claims were completely accepted, and he was awarded ￥1.7 million JPY in damages.

I have heard Uemura defend his article in person. And I have read defenses of the article by Uemura and others.

My own view is that he brought a rather casual journalistic approach to a complex and controversial historical issue, where documentation is fragmentary and contradictory. The problems with his article and his approach are all too common, even in articles about subjects that do not deal with anything so controversial.

Uemura has admitted to knowing that the WVC and and the comfort women system (CWS) were not the same. Yet, he defends using WVC as a synonym for the CWS on the grounds that others were doing the same thing at the time he wrote. He should have noted this common error in his article and used scare quotes or some other indicator if he was going to do the same.

In my view as a social historian, the most grievous error in Uemura’s approach was giving too much significance to the unverified and ambiguous testimony of one person about a system that ran from 1937 (or 1931 by some definitions) until 1945, and involved tens of thousands — if not necessarily the 200,000 some claimed. Doing this was not, however, something that Uemura alone is guilty of. It permeates commentary on the subject from both the left and right. Both sides cherry pick data to suit their agenda.

Deciding History in the Courtroom

In her November 15, 2018, press conference, Sakurai made the point that it was very odd that Uemura, a journalist who professed to be a proponent of freedom of expression, had turned to the courts to take issue with a journalistic expression he did not like.

This same pattern is to be seen in Press Freedom in Contemporary Japan, edited by Jeff Kingston, where there is much hand wringing about how libel and defamation laws in Japan allow conservatives to check freedom of expression, but no mention of liberals and leftists turning to those same laws in an attempt to control expression they dislike.

This pattern of the left trying to control the comfort women narrative through legal means is also to be seen in South Korea, where the literary historian Park Yuha was charged with defamation because some of the self-styled comfort women (or their handlers) did not like her conclusion that — at least as far as the formal system went — it was not based on coercion. (She does recognize coercion outside the formal system.)

On January 31, 2020, I attended a symposium at Waseda University featuring Park Yuha. The title was “Making History A Matter of Law” (歴史の司法化).

After the symposium, I asked her how the English translation of her book, Comfort Women of the Empire (帝国の従軍慰安婦) was progressing. She replied, “It is finished, but we cannot find a publisher. Someone is blocking us.”

A friend contacted the lead translator, a respected British academic at one of Britain’s most prestigious universities. He verified that publishers were rejecting the manuscript, with some not even replying.

My JAPAN Forward colleague, Jason Morgan, who led the translation of Comfort Women and Sex in the Battle Zone by Hata Ikuhiko, also faced similar difficulties in securing a publisher, even though Hata is a meticulous and respected historian whose work on the “rape of Nanking” has caused some “denialists” to admit that there was an atrocity.

If the allegedly right-wing or so-called denialist narrative is as ridiculous and so obviously false as the left-wing comfort women advocates claim, there can be no harm in publishing it. If these advocates are correct, if anything it would discredit those who refuse to see the comfort women as an instance of unmitigated evil on the part of Japanese. That is a risk that the left should be prepared to take in the interest of fostering debate on the subject.

It is impossible to predict whether Uemura will be successful on appeal.  Although he has a contingent of diehard supporters in Japan and South Korea, both the domestic and foreign press appear to have lost interest in his case, if not with the comfort women issue as such. Coverage of his losses on appeal has been minimal, with no editorials on the subject.

Suffice it to say that the legal issue of defamation has almost certainly been resolved. As the courts have ruled, even if Uemura’s reputation suffered, good faith doubts about the veracity of historical claims are in the public interest.

Continued debate on the reality of the comfort women system should be the province of historians who can actually work with the documents and recollections that exist, especially those in, but not limited to, Japanese and Korean. Turning to the courts for the interpretation of historical issues cannot but have a chilling effect, whether it is done by the left or right.

Both Sakurai and Nishioka have stressed their wish, as did Park Yuha, that differences about the comfort women system be argued in public discussion, not in courtrooms. I share that view, but I would add the caveat that both sides should focus on what can be documented, and rigorously avoid ad hominem attacks.