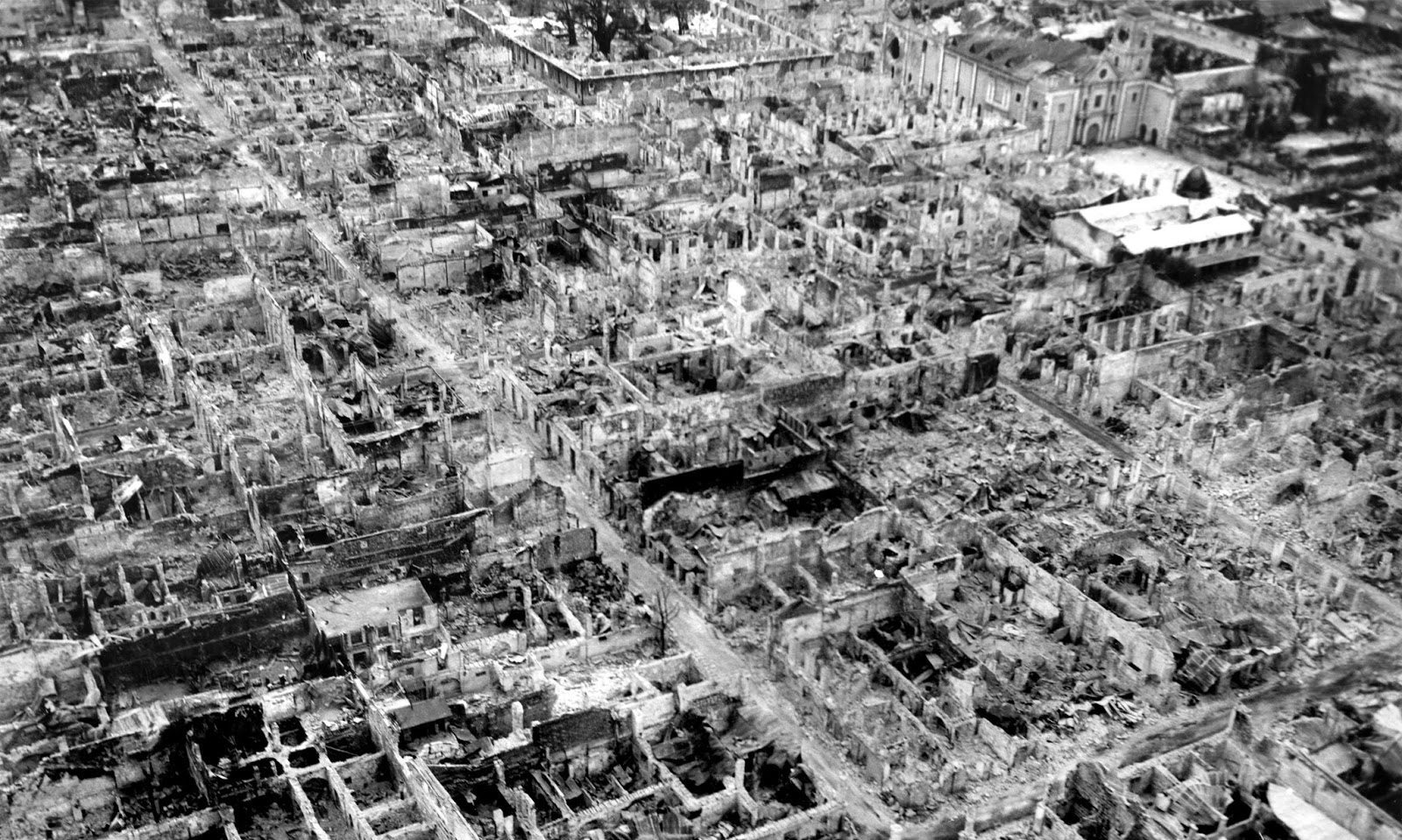 Allied bombing destruction of the walled city of Manila in 1945, during the Battle of Manila, (© Office of the Surgeon General, Dept of Army, Washington via Wikimedia Commons)

On February 4, 1945, a young David Bergamini was ostensibly facing his last night on earth. Rumor held that the civilian internees and prisoners of war at the Bilibid Camp in the Philippines, in which he was interned, were due to be executed the following day under a kill-all order.

But then, as if by miracle, the cavalry arrived. The United States army rolled up in tanks and promptly surrounded the facility.

The Japanese camp leadership negotiated surrender of the camp in exchange for a ride to the Manila city limits. The US commanders accepted the deal then dropped off the Japanese officers and guards at a location where they were gunned down by Filipino irregulars. At least so writes Bergamini later in his controversial book, Japan's Imperial Conspiracy.

Bergamini's tale is one that is ubiquitous within the innumerable accounts of the Allied POW and internee experiences within the Pacific War. In camp after camp, as Western diarists and historians explain, the Japanese were on the verge of massacring the POWs and internees before fate intervened. The condemned were miraculously spared (the Japanese officers and guards frequently enjoying considerable less fortune).

The evidence provided for this assured belief is the presence of earthworks and pits that were interpreted as mass graves, the positioning of machine guns pointed into the camps rather than out, and warnings provided by friendly Formosan (Taiwanese) or Korean camp guards.

In respect to written evidence, there is a singular piece that is quoted or referenced by all and sundry. It is an extract from the journal of the Taiwan POW camp headquarters which reads in part "[I]t is the aim not to allow the escape of a single one, to annihilate them all, and not leave any traces." Here it is, they claim. The kill-all order ー the policy directive sent out from the War Ministry in Tokyo to the camp commandants of the empire.

Direction of the Order's Flow

"Yet it was not a high level decision from the Taiwan Army, much less from the War Ministry" states Sarah Kovner, in Prisoners of the Empire (Harvard University Press, 2020), as the information is flowing the wrong way. The document was drafted at the Taiwan POW camp headquarters and sent to the commander of the Taiwan Army through the chain of command.

"If there were a central order for a massacre," Kovner continues, "there would have been no need for camp HQ to inform higher-ups." Instead, the order would have been received from Tokyo, and handed down from Taiwan Army command to its subordinate units.

This much quoted Taiwan order was formulated at a local level and aimed to establish policy within an emergency situation, such as an uprising or when the POWs might constitute a hostile force. It set out "last ditch strategy" Kovner concludes, "if the situation got out of control."

Most historians, diarists and commentators are unaware of the full details regarding the Taiwan kill-all order. Others are all-too eager to assume the worst about the Japanese. One who was aware of the Taiwan order's shortcomings, yet wished to insist on a kill-all policy anyway, was Paul Ham in Sandakan, the untold story of the Sandakan death marches (Random House Australia, 2013). His approach is worthy of examination.

Sandakan was a town on what was formerly British North Borneo, (Kalimantan), Indonesia. It was the location of a Japanese POW camp that ultimately became untenable as the war ground on. By 1945, the town had been heavily bombed and the camp had become isolated. The airfield that the POWs had been constructing was deemed redundant.

The camp needed to be moved. Allied control of the sea and air ensured that the only option was to march the troops on the island's rough tracks to the more populated west coast, a distance of around 260 kilometers.

Of the approximately 1,000 POWs that took part in a series of cross island treks, only six would survive. This gave rise to the theory that the purpose of the marches was to massacre the Allied prisoners of war.

Had the Japanese wished to rid themselves of the POWs, however, they need only have loaded them into the holds of ships staffed with expendable Korean and Taiwanese guards. The ships, then, almost certainly would have been sunk by the United States.

Additionally, Japanese troops were dying en masse alongside the POWs on the march, often from starvation. If the death of POWs had been the aim, it would surely have made more sense to dispose of them quickly and preserve all food stocks for the Japanese troops who were compelled to endure the same cross-island marches.

The Japanese officers made the above arguments at their war crimes trials. They were dismissed by Ham—without elaboration—as "self serving nonsense". Ham then moved on to his preferred summation of Japanese conduct throughout its empire during the final months of the war.

"Mass slaughter is the last act of the Japanese war," begins Ham, attempting to characterize the death rates that occurred during the Sandakan death marches as unsurprising. "Throughout 1945, in remote places, with no strategic value, prisoners are herded together to build railroads, airfields, roads – all hopeless projects now, under Allied control of the air. The aim is to work the prisoners to death," he writes in his history.

No endnotes or examples are provided.

Indeed, this statement is simply not true. Where possible, the Japanese withdrew POWs to the home islands, where their labor continued to prop up the war effort. Those stranded within the empire were unburdened with meaningless projects. The camp commanders were sufficiently taxed with procuring enough food.

Ham then introduces the notion of a centralized kill-all policy: "This accords with the policy of Japanese High Command, which is not simply a case of 'kill the prisoners'. They must first be sapped of the strength in the cause of Imperial Japan," he writes.

"And yet the order, 'kill the prisoners' is vague and inconsistent" Ham concedes. He acknowledges the "last ditch" conditions within which the Taiwan order specified that massacre might be initiated, but not that the order had been formulated at the level of the Taiwan POW camp command, rather than in Tokyo. Stretching, Ham suggests, "However, the loose wording and fury of Japanese officers at the fag end of the war leads them to apply it, in practice, to all prisoners."

There is a certain irony in this usage of "fag." It is a term coined within an elite school system which denotes a junior student who did menial chores for a senior boy. Compliance was sustained by the threat of beatings. Sexual violence against the junior boys was not uncommon.

The fag system is an appropriate metaphor for the racism, imperialism and colonialism of the decades that preceded the World War II, an era in which Japan struggled to extricate itself from the fag end. The school system in question, of course, was British, not Japanese.

But I digress. Paul Ham has charged that Japanese officers applied a kill-all policy to all prisoners. For a statement of this nature, examples are required. Is he able to provide them?

"Elsewhere in the Pacific, the 'kill the prisoners' policy is not universally applied" he then contradictorily states, implying that it was enacted within the Sandakan marches but not elsewhere. Was there something specific about the Sandakan Camp which led to a particular level of "fury" on the part of the Japanese? Ham does not elaborate.

The principle thesis of Sarah Kovner's Prisoner of the Empire is that there was little uniformity among the Japanese POW camps. Paul Ham's aim, by contrast, is to take an extreme example and portray it as the norm. It is hard to conclude that he succeeds.

The "Ass" End of the Chain of Command

Paul Ham refers to the Taiwan POW camp kill-all directive as "the most-cited source for instruction." Were there any others?

One can be found within a book that Ham, an Australian,  would surely have read, The War Diaries of Weary Dunlop (Nelson, 1986: eBook by Penguin, 2005). After all, Dunlop was Australia's most celebrated World War II hero.

Edward "Weary" Dunlop was an Australian surgeon who was captured on Java, Indonesia, and spent most of the war in POW camps. His diary, published in 1986, is a remarkable document that humanizes his Japanese captors to a degree that is rarely evident in Pacific War accounts.

A June 15, 1942 entry at Bandoeng on Java, early in the war, lists five orders from the camp command. The first states:"If any one escapes, whole camp to be wiped out from above down."

On June 16, the following day, both the source of the order and the response to its reception at the Bandoeng camp were made plain in a conversation between a POW officer and the Japanese camp adjutant.

"It is all very well for some ass on the desk at Div. HQ to order these things" the adjutant complained. "But if we try to kill the whole camp we get killed too!"

A Uniform Desire for Home

It should certainly not surprise that as the war drew to a close, apprehension among the POW and internee population was high. When rumors of impending massacres were made, they spread quickly and were believed. But while executions and massacres did occasionally occur, the transfer of authority within the hundreds of camps which the Japanese maintained was relatively orderly.

In the final weeks and months of the war, planned massacre was not miraculously avoided in camp after camp, hundreds of times over. Indeed, from the outset there was no kill-all order originating out of Tokyo.

Moreover, as with the adjutant of the Bandoeng Camp, there is no guarantee that the commandants and guards would have foregone their chances of returning to their hometowns and families by uncritically accepting a kill-all order and carrying it out.